What is Bitcoin Cash? The Edge Over Other Bitcoin Spinoffs

If you are relatively new in the world of cryptocurrency, you might have noticed more coins that include Bitcoin in their name. While the original Bitcoin (BTC) has the highest market cap in the market and more than 66% dominance at the time of this writing, several spinoffs can be found when scrolling through CoinMarketCap’s list.

Among them, Bitcoin Cash is considered to be the most popular “clone” of the original currency. If you haven’t heard about Bitcoin Cash before, there is an easy way to distinguish it from Bitcoin – the color of their logo is different: 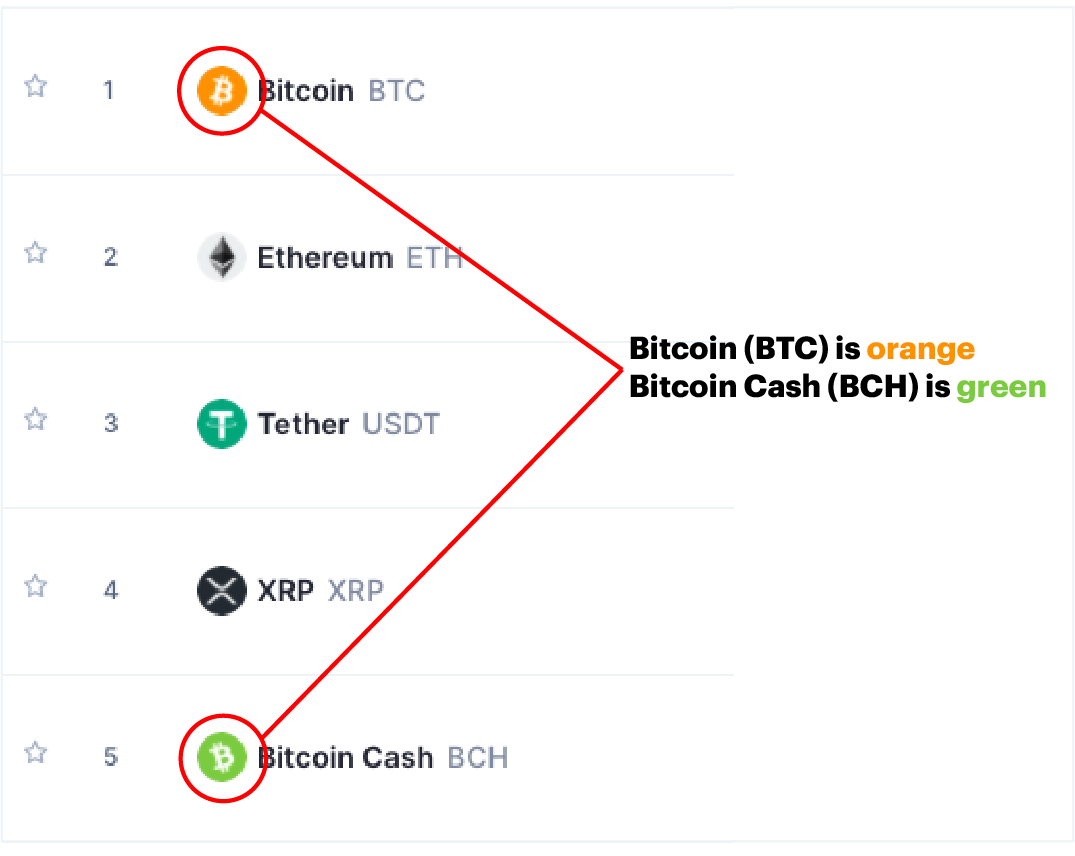 But what is Bitcoin Cash exactly? Is it necessary in the already overcrowded world of crypto and, if so, what makes it different from its predecessor? In this short article, we take a look at the controversial cryptocurrency, exploring its background, performance, and future potential.

What is Bitcoin Cash?

Bitcoin Cash is a cryptocurrency built upon the code of the original Bitcoin blockchain. It is considered to be a “spin-off”, or a “copy” since the developers behind the project simply used Bitcoin’s code, making a few adjustments to its blockchain along the way.

A more technical definition of this process is known as a “hard fork”, meaning that the original blockchain is split into two different paths. Each path operates independently but has the same history. 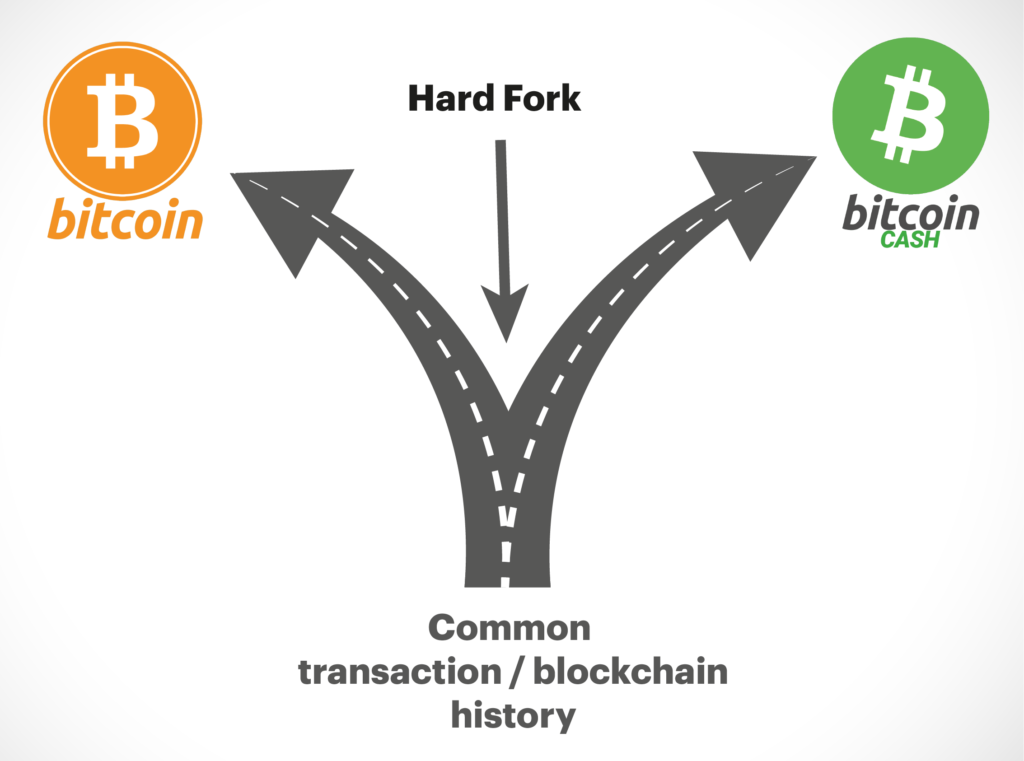 For the less technical, Bitcoin Cash can be seen as an “upgrade” to the original Bitcoin. It’s like a new version of Microsoft Word, which creates files that can’t be opened by older generations of the software.

Furthermore, you might also wonder what is BCH. In short, the 3-lettered word BCH is an abbreviation for the coins of the Bitcoin Cash network. Similar to Bitcoin, the coins have the same name as the network itself, which makes the need for a coin-related acronym essential.

How does Bitcoin Cash work and when was it created?

The network split described above occurred on the 1st of August 2017, distributing BCH coins to BTC coin holders in a ratio of 1:1. This means that investors received an amount of Bitcoin Cash coins equal to the amount of BTC in their wallet.

On the same day of its issuance, the new coin started trading at $240. At that time, Bitcoin (BTC) was trading at a price point of $2700.

What caused the blockchain split?

To understand what caused the split in Bitcoin’s blockchain, we need to better understand the purpose of the former. According to Satoshi Nakamoto, BTC is a global, decentralized form of money (a.k.a. alternative currency).

And while this is somewhat the case nowadays, the majority of people still use Bitcoin as a store of value since its network is inefficient and slow when it comes to transactions.

In hopes of solving this problem, some members of the Bitcoin community (developers and miners) led by Roger Ver decided to split the original blockchain and create a cryptocurrency that can be used primarily as a medium of exchange. The split aimed to increase the number of transactions that the network can process, and this was done by implementing a few key changes into the new network.

What is the difference between Bitcoin and Bitcoin Cash?

To understand what is Bitcoin Cash (BCH) it is best to point out its unique differences compared to Bitcoin. In other words, let us give a brief Bitcoin Cash vs Bitcoin comparison:

To better understand the performance of BCH, it is best to take a look at its performance in a YTD (year to date) chart, and make conclusions. Here is what we can learn from the Bitcoin Cash Price: 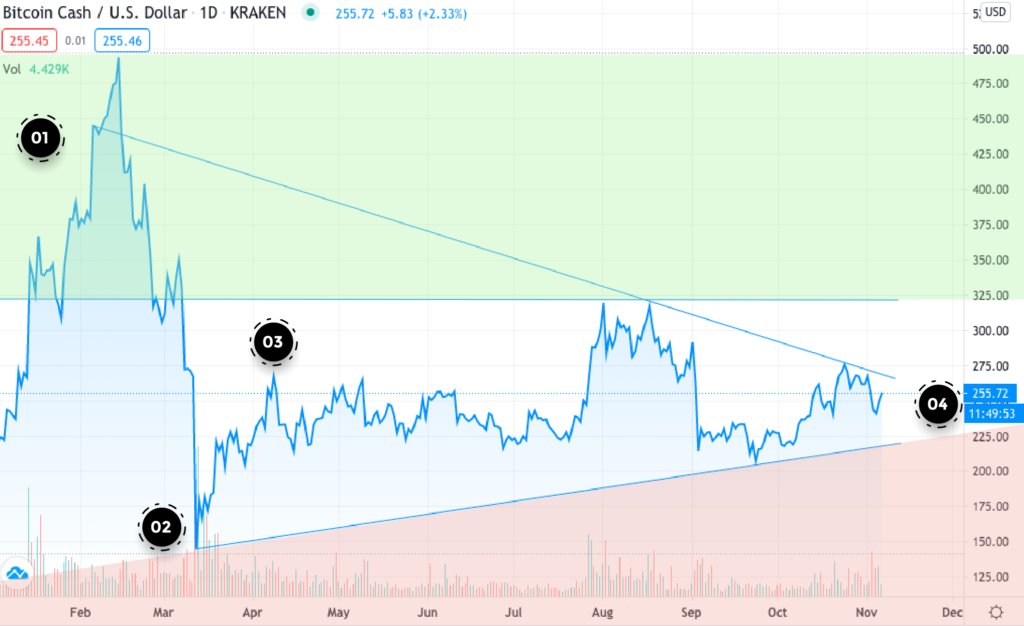 The direction of the market (and thus of BCH) will highly depend on the sentiment of investors during that time. The most possible scenario at the moment of this writing is for BCH to break towards the upside and finds new support in the green zone shown above (between $320-$500). More negative scenarios point towards a decrease in value compared to BTC over a longer timeframe. If this is to become true, we could see a rather stagnant BCH/USD chart that remains within the $250-$270 area.

Is Bitcoin Cash a good investment in 2020 and beyond?

What is Bitcoin Cash going to do in the last quarter and the upcoming year in terms of price? As the cryptocurrency markets continue to recover, new and experienced investors wonder whether BCH has the potential to outperform its peers.

In our opinion, Bitcoin Cash is not the ideal investment when it comes to its potential as a store of value. With the average investor being more educated and aware of the background and nature of BCH, there is less interest in obtaining the coin as a long-term investment. Aside from a gradually declining interest, we also observe a decrease in mining participants after the coin’s recent halving.

These points do not relate to BCH’s value changes in the next market cycle. When it comes to price action, we expect to see BCH follow the direction of the market – positive market conditions lead to positive value appreciation.

The point we are trying to make here is that Bitcoin Cash is less likely to experience the size of price gains that other, more popular cryptocurrencies are expected to see.

Therefore, there are two things we tend to believe:

What is Bitcoin Cash worth and what can we expect in the future?

On the 20th of December 2017, just a few months after the hard fork, the Bitcoin Cash reached a peak price of $4,355. Shortly after the peak price point was reached, the cryptocurrency entered into a year-long bear market, which took its value down to $78 (-98%).

In the past two years, the recovery of the crypto markets has helped the coin regain some of its value, but we are still nowhere near the past peak. Bitcoin Cash is currently trading nearly 95% below its all-time high.

Cryptocurrencies with stronger fundamentals have largely outperformed BCH. This interesting development points towards utility and user adoption instead of marketing as major drivers of a coin’s price.

Additionally, the introduction of the Lightning Network as a solution to Bitcoin’s scalability issues has made Bitcoin Cash less important than it previously was. The latest will now need to create a new edge against its biggest competitor to remain relevant in the next few years.

How to buy Bitcoin Cash (BCH) on Paybis

Now that we explained what Bitcoin Cash is and how it works, it’s time to walk you through the buying process.

Before we get started, make sure you have a wallet to store your coins; you can check our Best Bitcoin Cash Wallet article to make a better choice. Once you have a BCH wallet, head over to Paybis and start a new transaction:

From this point onwards, the process is very straightforward and easy to follow. New users will need to verify their account through a short KYC process. After that is done, you will be asked to enter your BCH wallet address and complete the payment. A few minutes later, you will receive the BCH in your previously indicated wallet.

Summing up the key points

At this point, you should be able to differentiate BTC vs BCH and better understand how the Bitcoin Cash blockchain works. To sum up what is Bitcoin Cash, here are some key points you should keep in mind:

This short article is only meant to explain Bitcoin Cash and its functions. The contents are not meant to serve as financial advice and should therefore not be used as such.