Blockchains have different methods of rewarding users for participating in their networks. When Bitcoin got introduced, PoW (Proof of Work) rewarded miners for confirming transactions. A few years later, in 2012, the concept of PoS (Proof of Stake) was introduced as well.

In this article, we will talk about the rewarding process of PoS and review the best staking coins for 2021. After reading this guide, you should have a good idea of the technology behind these coins, their requirements for staking and how you can earn passive income.

How does Staking work?

Staking is an incentive mechanism that rewards holders of certain cryptocurrencies for their contribution to the network. The size of the reward depends on the number of coins these network participants are holding in their wallets.

This rewarding process takes a more democratic approach, unlike mining. Here, everyone has a good chance of compensation whereas, in PoW, only the most powerful miners have that privilege. Staking also gives an additional reason to hold onto specific coins for longer periods of time.

Moreover, PoS Blockchains do not rely on mining hardware to verify transactions. They allow their participants to become validators, simply by depositing and locking a certain number of coins on the network.

To summarize, in a PoS environment, validators are rewarded based on the number of coins they hold. The more coins they lock in the network, the higher their potential rewards.

Since staking is trending in the crypto industry, we decided to create a list with the best option available. Here are the 5 best staking coins for 2021.

Ethereum is one of the most popular cryptocurrencies, coming second in market capitalization, after Bitcoin.

Its main goal is to provide a “decentralized supercomputer”, allowing anyone to develop and deploy dApps and smart contracts

Currently, Ether (ETH), the native cryptocurrency of the Ethereum Blockchain, is received as a reward through GPU mining on a PoW system (much like Bitcoin is mined).

However, as we mentioned before, PoW doesn’t do well with scaling.

For Ethereum developers, this became most apparent with the popularity increase of Cryptokitties, slowed down transactions leading to an increase in gas limits by Ethereum miners.

Due to these events, it was decided that Ethereum will switch to a PoS blockchain in July 2020. Let’s see how this will work and why ETH might become one of the best staking coins in the market.

How staking on ETH will work

Current information indicates that the validators on Ethereum’s PoS network will be rewarded by earning interest on their locked-in Ether on an annual basis.

The minimum amount of ETH required to become a validator is 32 ETH, an amount which roughly equates to $4700 at the time of writing.

This might sound a bit expensive, and not everyone will be able to afford this many Ethers on their own. Thankfully, staking pools help with that. By joining a staking pool you can start getting rewards with as little as 1 ETH.

The expected annual rewards for Ethereum staking is between 4.5% and 10.4% per annum.  This number depends on the amount of Ethereum that gets locked up for staking. As such, and due to the coin’s popularity, it is best to assume that you will receive the low end of the rewards.

Also, it’s important to remember that running a node will cost about $120 a year, and running a validator client costs around $60 a year. This is an additional expense you need to keep in mind.

To conclude, Ethereum 2.0 is a really positive event for the community. It is expected that the value of the tokens will increase thanks to Ethereum’s new money-making potential.

TRON (TRX) is the love child of controversial Chinese crypto entrepreneur Justin Sun. The cryptocurrency’s purpose is to create a decentralized content entertainment system on the Blockchain.

But apart from its aspiring goal and its high position in the list with the best cryptocurrencies, Tron also offers its users the possibility of Staking.

TRX is based on a slightly different staking protocol which is known as Delegated Proof of Stake (DPoS).

DPoS introduces a democratic voting system, wherein, instead of randomly being chosen by the number of coins they stake, block validators are elected by the participants of the network.

In the network, the different SRs give different staking rewards to those who vote for them. You can check the rewards each SR team offers on Tokengoodies.

To start staking your TRX, you will need to vote for one of the 27 SR from the list. Here’s how it works in a few simple steps:

That’s it! After a while, your TRX balance should start to increase.

This comprehensive video guides you through the whole process, from creating a wallet to finally casting your vote for the SR of your choice.

Decred tries to solve the centralization of big mining companies on PoW systems by giving back the decision power to the users with a hybrid PoS+PoW system.

The rewards from mining blocks are divided as follows:

Decred (DCR) holders can stake their coins by investing in a ticket that gives them voting power on the network. This is done through their official Decredition wallet.

Ticket prices are determined by the difficulty algorithm of the Blockchain. The more users there are, the more expensive the tickets get. 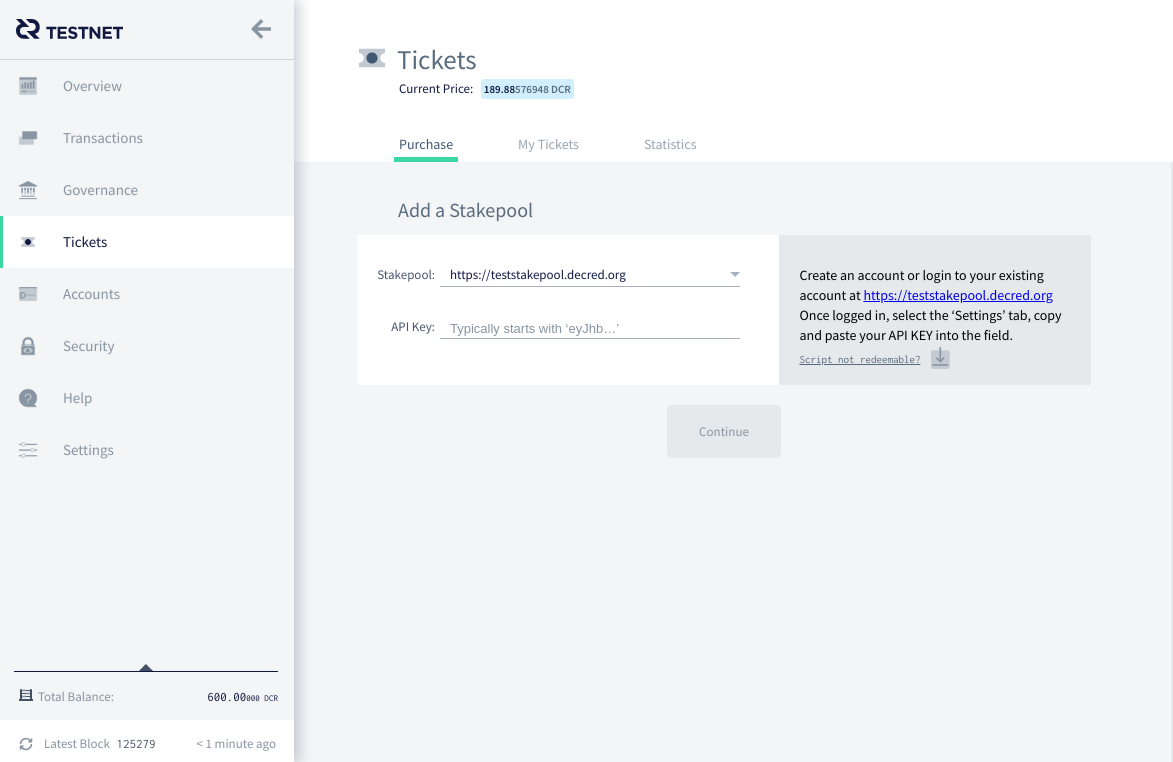 You can buy tickets manually (offers you more control) or automatically (more convenient, but need to be online 24/7)

Once users purchase a ticket, the system acts as a lottery, randomly selecting one of the 40,820 active tickets. The median selection time is 4 weeks (28 days), but keep in mind that it can last up to 4 months (max 144 days).

The selected ticket owner then votes, and receives their staked DCR back (the price of the ticket) plus the staking rewards that vary through time. Currently, Decred Staking offers between 8% and 4% in annual returns, which is pretty decent, especially for mid-term returns. 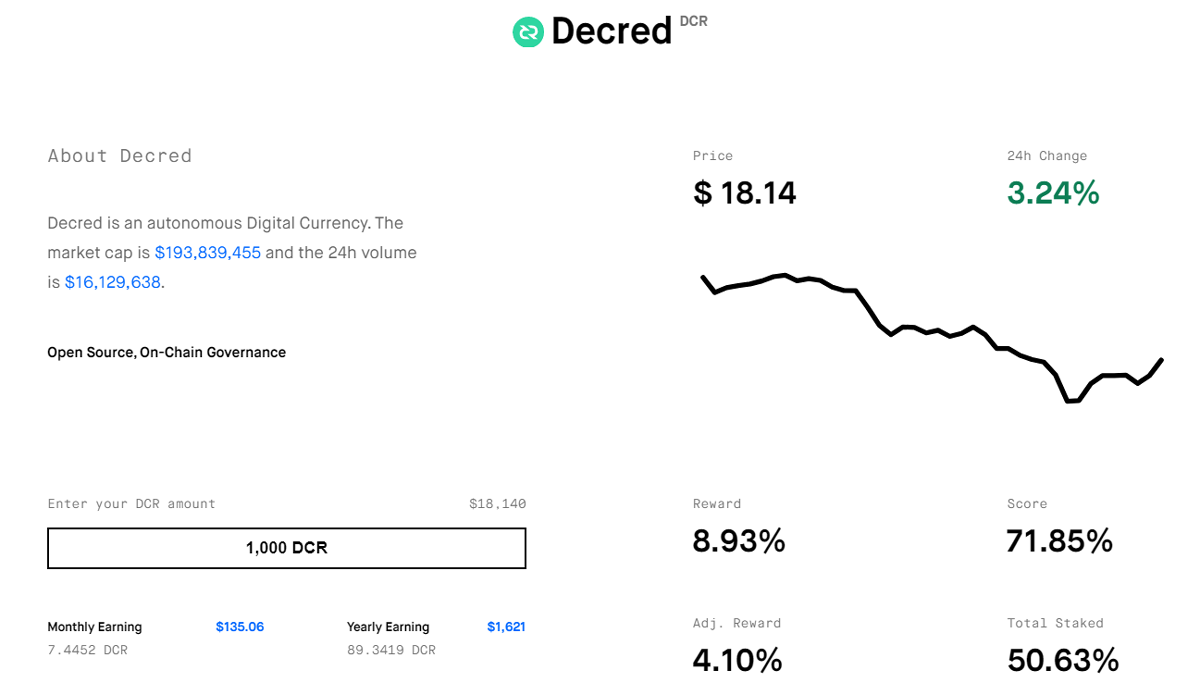 The voting process is divided into two different categories, Solo and Voting Service Provider voting. If you plan on staking Decred, it might be worth exploring how this works.

Furthermore, Decred also offers “Ticket Splitting”, which allows users to split the cost of the ticket with others. The rewards are proportional to the DCR invested towards the ticket.

Here’s a video from the official Decred team explaining how this works:

Neblio (NEBL) might not be the most popular cryptocurrency on this list, but it certainly makes up for this by proposing the highest staking ROI on the market.

It’s a dApps platform that emphasizes its ease of use for new developers and allows for easy tokenization of physical and digital assets without technical experience.

Neblio’s Blockchain is kept secure through a classic PoS system. Users stake NEBL coins to secure the network and get rewards for the time spent staking.

The staking process is fairly straightforward, as it doesn’t involve more complicated mechanics like voting or ticket purchasing.

Before we explain it, we should mention two important properties of the tokens: token age, and total weight. These are taken into account when the system determines the winner and the amount of the rewards.

Worth noting is that tokens have a minimum and maximum “age” where they can “gain weight”.

As for the rewards that are currently being distributed, Stakingrewards reports a staggering 26% to 36% ROI on a yearly basis. 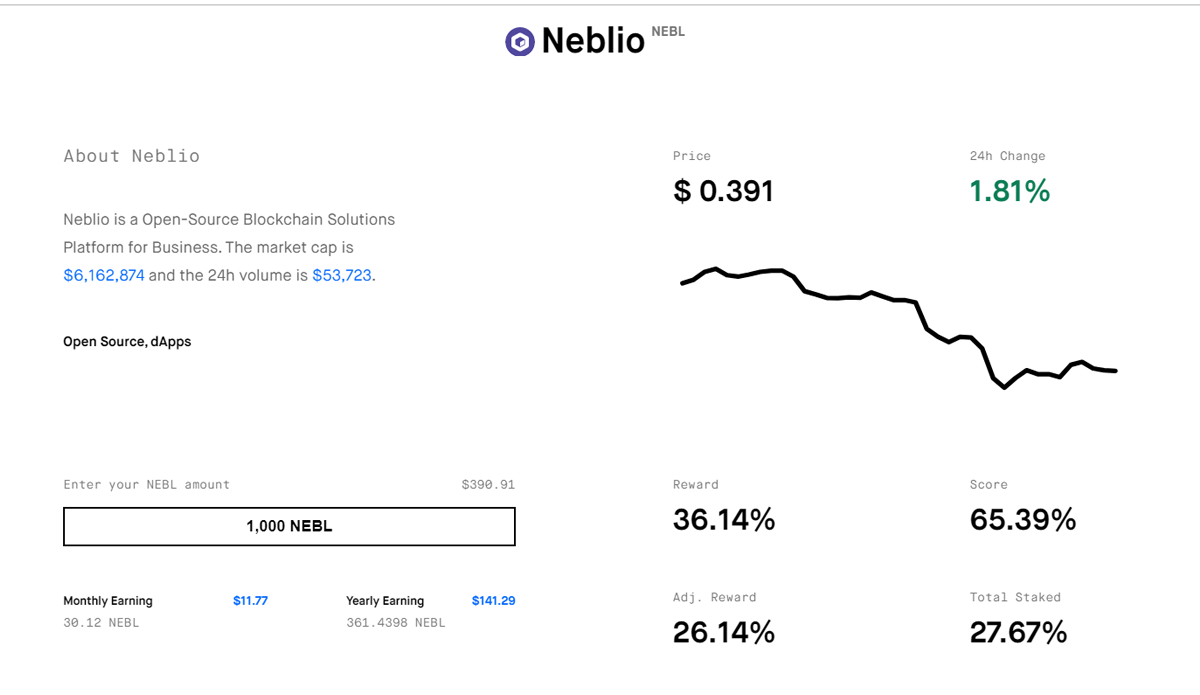 Next, let’s see how this works in practice.

Before you start, ensure you have the latest version of the Neblio Core wallet and some NEBL coins stored on it.

The small coin icon at the bottom of the wallet will indicate the status of your wallet. If it’s black, you are staking. If it’s grey, you still need to sync or unlock your wallet.

For a more detailed explanation of the process, here’s a video that takes you through the process step by step:

ICON (ICX) aims to build the largest decentralized network in the world. To do this, they are building a massive platform, known as ICON Republic, which helps various Blockchains connect with each other.

Apart from that, the ICON protocol offers a decentralized exchange (DEX) where the connected communities exchange value instantly and globally.

ICON’s Blockchain works on a PoS system and the staking process is similar to that of Tron’s DPoS voting.

The staking process is similar to Tron’s in that it’s based on voting for Public Representatives (P-Reps).

You can use the ICONex wallet interface to navigate the P-Reps or validators of the network and delegate an amount of your staked ICX to up to 10 different P-Rep teams.

After the validation of a new block, the distribution of rewards reflects the staked amount. Sources report between 6% and 36% of annualized returns, with Staking rewards setting it somewhere in the middle, between 13% and 19%. 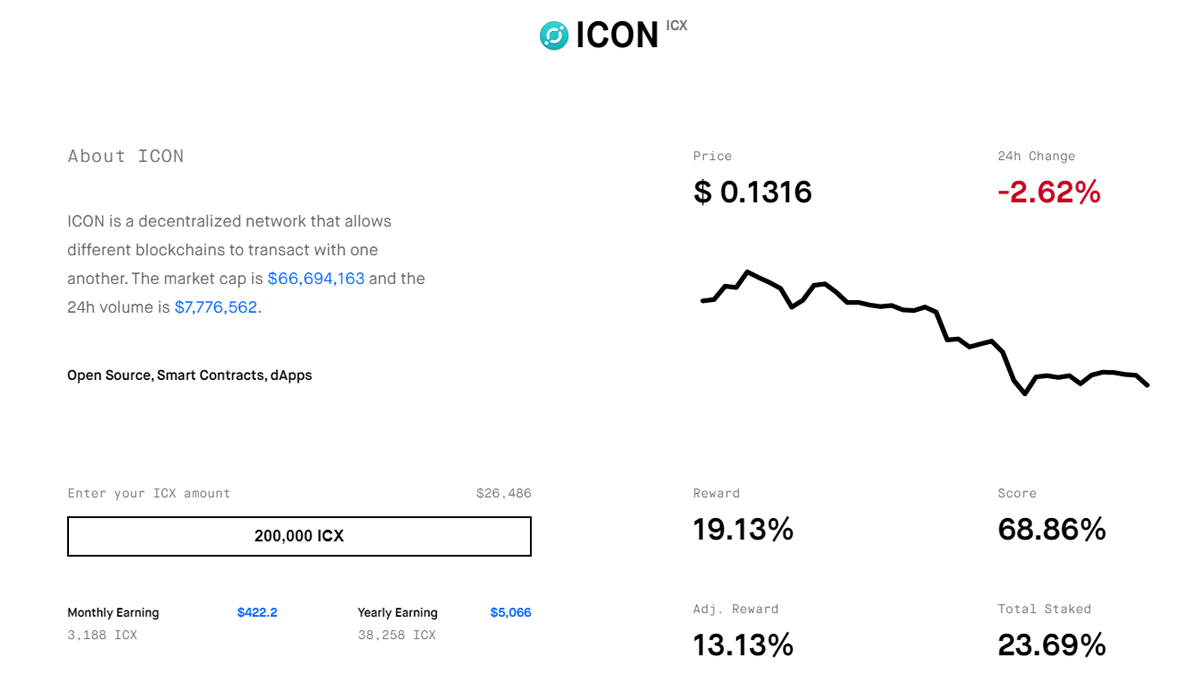 As ICON staking gets more popular, rewards will eventually decrease.

For more information on the P-Reps, you can check this page, where each one of them states their business proposal and why users should vote for them.

There are 22 validators P-Reps and 78 others that are candidates. Candidates become validators once they get enough votes.

Staking itself is pretty simple:

Check out this tutorial on staking by the ICONation official youtube channel:

Becoming a P-Rep might also be a great business opportunity. However, keep in mind that running a node is quite expensive as it requires a minimum of 1.610.092 ICX. This translates into about $220.000 at the moment of writing.

All in all, staking cryptocurrencies seems like a decent way to start earning passive income.

Here’s a quick summary of the 5 best staking coins comprised in our list:

Hopefully, this list provides a helping hand when deciding which coins are worth staking. While the expected rewards are not set in stone, this is a great way for long-term holders to make a decent amount of passive income.

Let us know if you have any questions or information you wish to add, by leaving a comment below.

Is staking still a good way to earn profits?

The concept of staking is being adopted by more cryptocurrencies than ever before. However, not all coins follow the same distribution model. For example, there are several cryptocurrencies that mint new coins to pay for the staking rewards. This inevitably leads to inflation. Other coins, however, will pay the staking rewards from the fees of the network, which creates an uneven amount of rewards on a daily/monthly basis.

From all the available options, what is the best staking coin?

This highly depends on you. As will all investments, cryptocurrency is a risky venture as well. Many large projects will premise certain staking payouts, only to later deliver much lower amounts than expected. On the contrary, smaller coins will often give unrealistically large staking payouts, but complete the distribution every single month. As such, we recommend performing some further research on the topic.

Are any of the coins mentioned above subject to change?

The “best staking coins 2021” represents the top coins at the time of this writing. The coins are certainly subject to change since the roadmaps are rarely followed precisely. However, this does not make their potential any less significant.

For example, Ethereum has already postponed their shift to POS for the 4th time, currently setting the date for July 2020. However, by postponing the release of January, they successfully managed to avoid the crisis that came with the recent outbreak of COVID19.