Ethereum Price Prediction – A Look Into The Future

Ethereum is currently the second most popular cryptocurrency. Released in 2015, this open-source protocol saw its popularity rise astronomically during the ICO boom of 2017. After the bear market crushed the coin’s price, long-term investors were left with the question – Will Ethereum price go up again?

In this article, we will analyze the impact of the prior bear market on the popular cryptocurrency, as well as our Ethereum price prediction on both the short and long timeframe.

It would be difficult to give an Ethereum forecast without going into more detail on how the platform works.

Where Bitcoin is considered to be a great store of value, Ethereum offers a lot more possibilities. The main appeal of the platform is the Ethereum Virtual Machine, a supercomputer of sorts, that can run smart contracts and decentralized applications.

Anyone can create a vast array of financial products on the Ethereum protocol. They can range from personalized cryptocurrencies and decentralized exchanges to lending and interest-earning platforms.

Like with any cryptocurrency, mass adoption and popularity are directly related to an increase in price. Multiple companies adopted Ethereum in 2017, as it allowed them to develop their innovative and revolutionary projects (by creating ERC-20 tokens). They also sold their Ethereum-based tokens to investors through ICOs, forcing new market participants to create ETH wallets.

Unfortunately, the majority of these projects did not survive, and some were even labeled as scams. However, even though some of these cryptocurrencies never took off, lots of companies managed to survive, and currently thrive while running on the Ethereum blockchain.

In time, bigger virtual platforms consider the use of ERC-20 tokens to reward their users. Only recently, Reddit started testing a rewarding program with ERC-20 tokens on 2 of their most popular subreddits, hosting over 2.4 million users. It is projects like these that increase the potential for adoption and help consolidate Ethereum as the leading smart contract platform.

But let’s talk about an even more important event in the Ethereum ecosystem that might turn the entire crypto market upside down.

Some crypto analysts and experts believe the ETH 2.0 update will transform DeFi (decentralized finance) and trigger a major bull run.

For the past few years, Ethereum has been working on a PoW consensus algorithm. In short, network participants can mine ETH by using their computational power to solve complex mathematical problems on the Ethereum network.

But, with the release of Ethereum 2.0, the protocol will switch to PoS, enabling a staking mechanism on the network. As a result, holders will start receiving rewards simply for holding ETH, by locking it for a certain amount of time.

The upgrade was expected to deploy during the first quarter of 2020 but was delayed to Q2 2020. While some skeptics are becoming increasingly doubtful, the update remains highly anticipated throughout the crypto community.

To understand the price predictions in this article, let’s first have a look at the historical price performance of Ethereum. 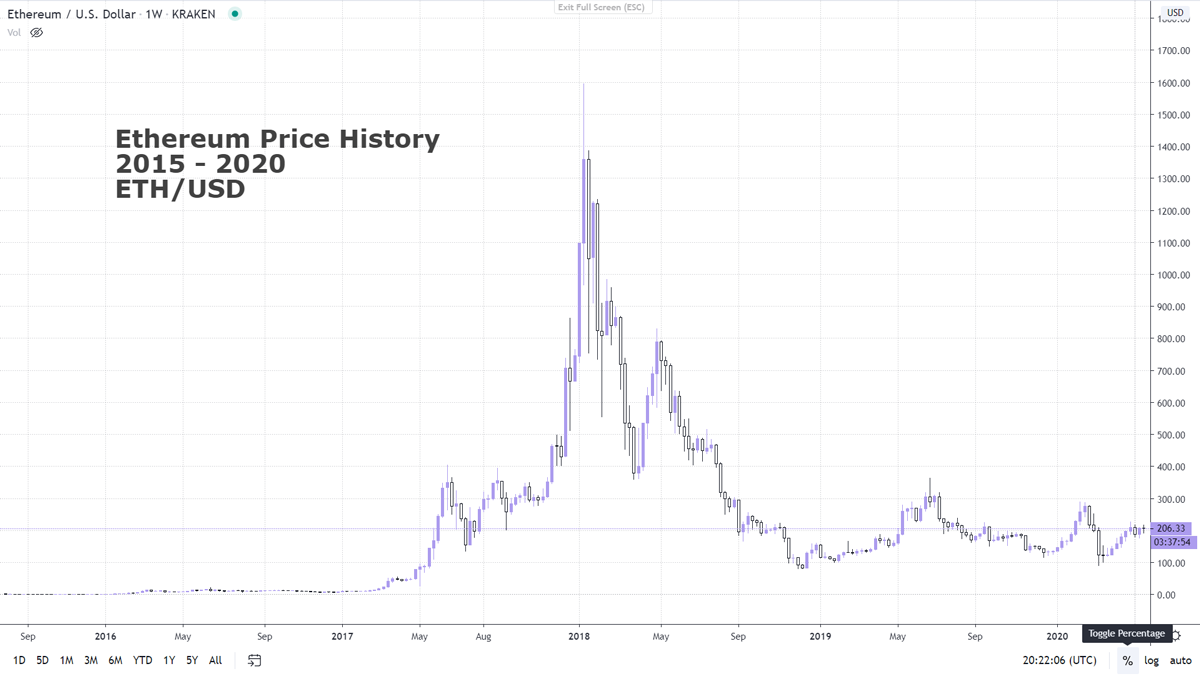 In the chart right above you can observe the price action of Ethereum since its ICO in 2015. Note that the latest bull run started in May 2017, where ETH price jumped from $95 to $400 within a one-month timeframe.

It was a great time for early investors, but no one could have predicted the crazy returns that followed.

The ICO boom had such an impact on ETH that its price rose to almost $1400 per coin. From January 2017 to January 2018, Ethereum’s value went up more than 30.000%! Unfortunately, in financial markets, such unrealistic price increases are often followed by a big drop in value.

As the ICO trend slowly dispersed, the price of Ethereum followed the market decline and bottomed out below the $100 mark in late 2018.

Today, Ethereum’s price trends seem to follow Bitcoin closely. The coin has been trading between $150 and $200 since the beginning of 2020.

If we allow ourselves to base our ETH price prediction on previous Bitcoin halvings, we can expect the price to rise again in the near future. 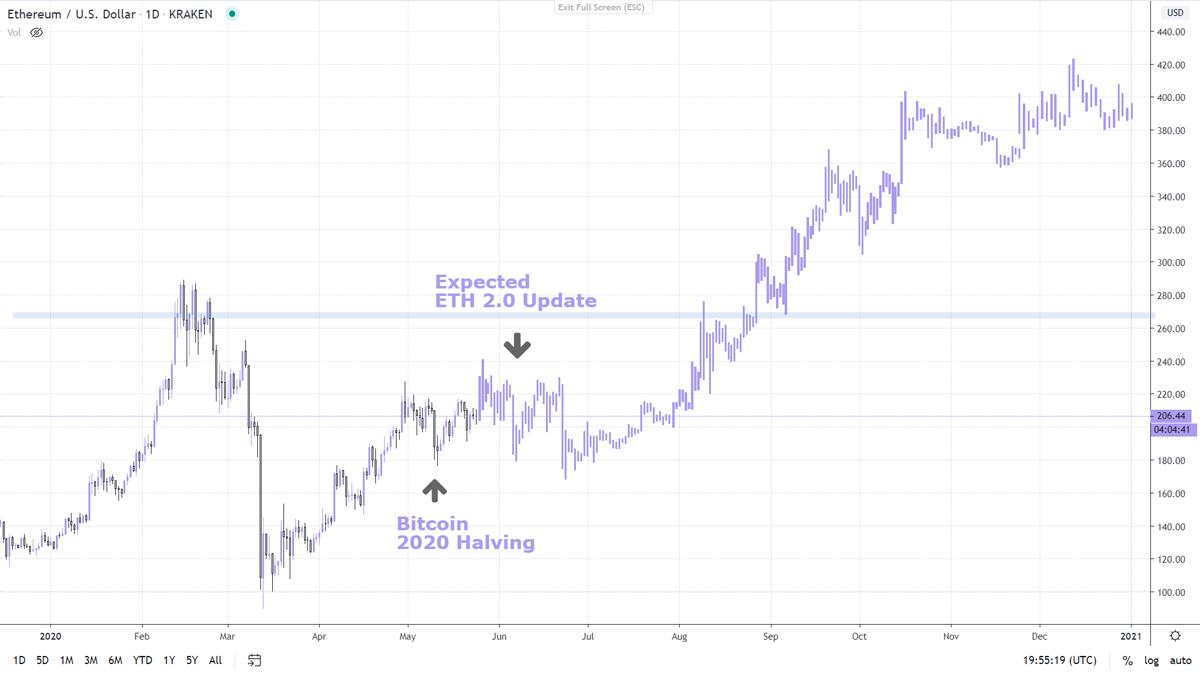 While 2020 started on a positive note, it has certainly not been the best year in the markets.

In February alone, Ethereum saw a 100% price increase that unfortunately did not last long. Just a month later, the Covid-19 pandemic impacted all markets negatively, and the second-most popular crypto wasn’t spared either. Ethereum hit new lows mid-march, going under the symbolic $100 mark once again.

But the market seems to have recovered. ETH has returned to its pre-COVID levels and has entered a clear uptrend. Moreover, the excitement for the upcoming ETH 2.0 is apparent in the community and among investors.

Analysts predict that the increased demand for ETH combined with a reduction in supply as soon as ETH 2.0 is released, could be the catalyst that helps Ethereum pass the dreaded $300 mark once again.

When crosschecking the historical patterns of Ethereum shortly after the halving of BTC, there’s a good chance that Ethereum will experience a bull run sometime during 2020.

Then again, who can tell how the community will react if the 2.0 update is delayed yet again? It would most likely create a lack of trust towards Ethereum and have a detrimental effect on the coin’s value. 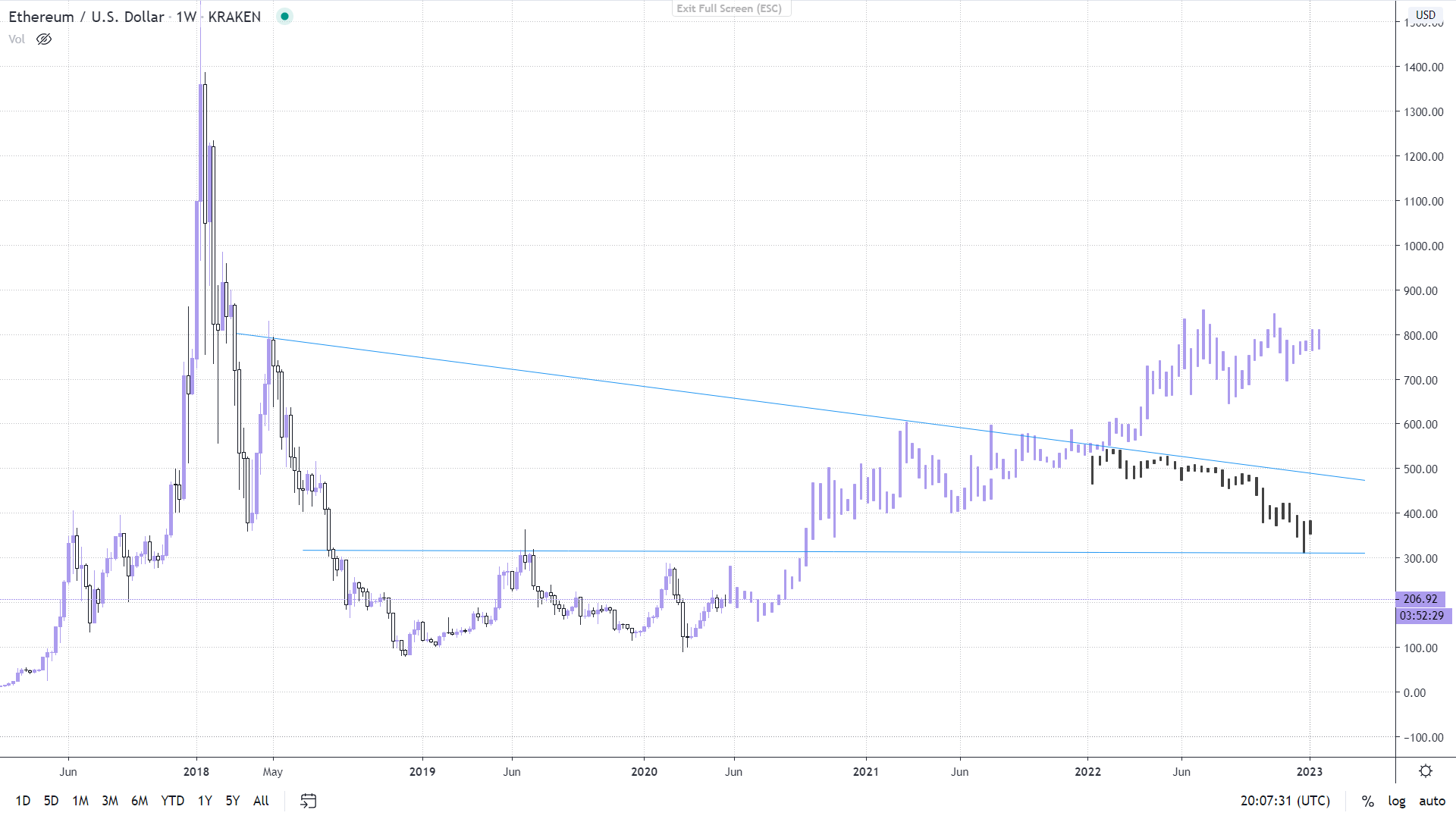 In 2022 the whole crypto market will most likely see the effects of BTC’s 2020 halving. By that time, ETH 2.0 should also be fully implemented into the network.

If no stronger competitor overtakes Ethereum as the main smart contract platform, we should expect the number of companies that use Ethereum tokens to increase massively. This, in turn, should create more demand for ETH.

As the years go by, the public acquires a better understanding of the cryptocurrency ecosystem and its use-cases. Decentralized Finance (DeFi) is becoming increasingly popular and, with Ethereum being its backbone, it attracts many new investors.

That being said, let’s look at the Ethereum future price while keeping somewhat realistic expectations. In our opinion, the average price of Ethereum during 2022 could be anywhere between $800-$900. 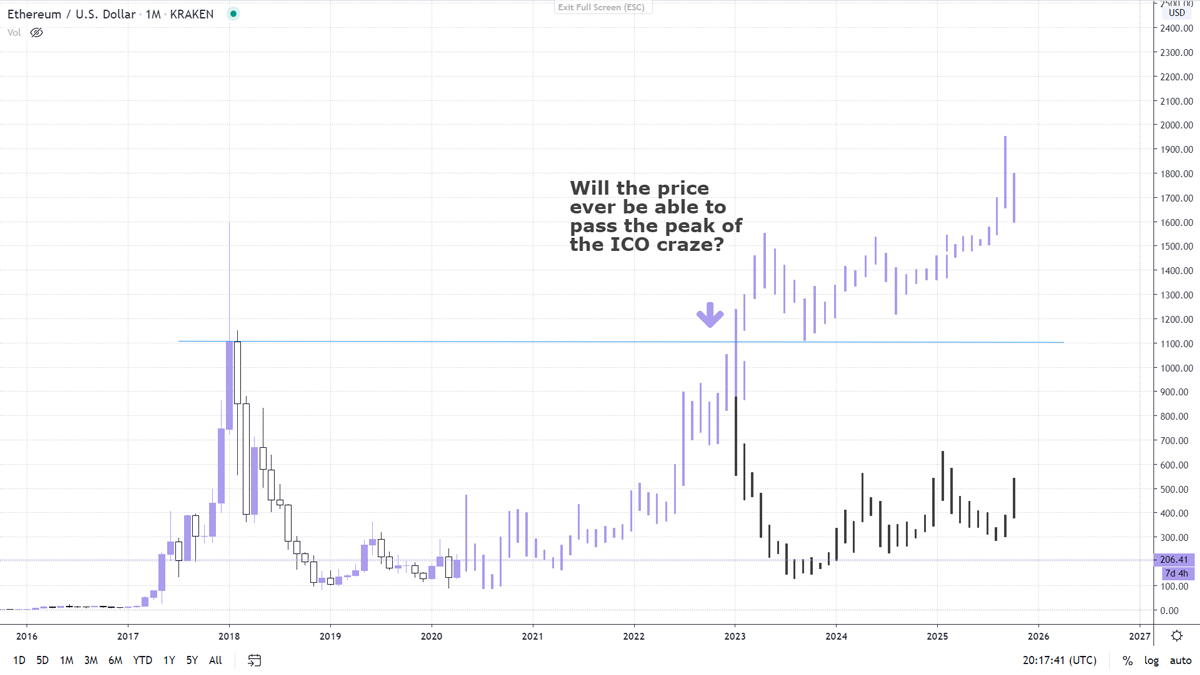 Five years from now can look like an eternity, especially when talking about cryptocurrency. Making an Ethereum long term forecast becomes increasingly difficult as many unknown factors need to be taken into consideration.

Assuming that DeFi and dApps have entered the mainstream, a large number of competitors would most likely try to outrank Ethereum. If Ethereum manages to remain the leading smart contract platform, we could see its price be valued much higher, possibly reaching a value of 0.1BTC on the BTC/ETH pair.

If the price breaks the all-time high of $1400, we would be entering uncharted territory, where anything is possible. Even 5-figure numbers per token.

In the less likely scenario where a competing platform overtakes Ethereum in popularity and usability, the price could go down considerably.

To understand how Ethereum will perform by 2030, we need to think about the evolution of technology. Trying to make an Ethereum price prediction so far into the future would be pure speculation. But we can assume that artificial intelligence and, in turn, decentralization, will become increasingly important.

The Covid-19 pandemic exposed the world economy as the “paper tower” that is really is. Unstable, ready to collapse at any moment. Once people understand the importance of decentralization, DeFi might become the new norm.

Internet coverage will also increase worldwide, providing all humanity with fast access to decentralized financial services. Faster computers would allow for more transactions per second so that the network can scale with the increased demand.

All of this could be very beneficial for Ethereum, but giving a specific price estimate would not offer any value to those looking for evidence-based predictions.

What do experts say?

Ethereum is a revolutionary technology that has been coveted by many serious investors in the tech industry. Here’s what some of the most influential entrepreneurs thing about Ethereum:

One of the early adopters of cryptocurrencies, Alexis Ohanian, recently mentioned Ethereum in a Forbes interview. According to him, Ethereum could reach $1500 again. He remains “most bullish” about the coin, basing his opinion on Ethereum’s popularity among developers.

The CEO of deVere Group, one of the most influential financial advisory organizations, has gone as far as saying that Ethereum could reach $2500 in the near future. He predicts another Bitcoin bull run after the halving, with Ethereum following suit.

Head of one of the largest crypto hedge funds, Dan Morehead recently declared that crypto is “coming of age”. He thinks that the correlation with the stock market is over and that crypto will trade as an independent asset. He believes Ethereum could be worth 5 figures within a couple of years.

Cryptocurrency prices are highly unpredictable. In order to make accurate price predictions, we need to imagine how the world will look like in the future. Faster computers, AI, decentralized finance and better internet coverage are some of the many factors to take into account.

Ethereum became extremely popular during the ICO boom and was used almost exclusively when creating new cryptocurrencies. Now that ICOs are a model of the past, and demand has decreased, Ethereum’s price has dropped significantly.

So it’s no wonder that people still ask – will Ethereum go up again?

It’s a fact that many companies are still developing dApps on the platform. As a result, new financial products using the Ethereum blockchain are being released regularly.

Moving towards a PoS model and increased mass adoption of the Ethereum blockchain could trigger another bull run that would drive prices up. Until then, all our Ethereum price predictions should be the starting point of further research into the upcoming events of ETH and the crypto market as a whole.

The price of Ethereum could double before the end of the year if the following occur:

These two major events coinciding could bring Ethereum back to high 3-digit numbers, ending the year on a positive note.

Predicting the price 10 years from now would be speculative at best. We need to factor in too many unknown variables to be able to give a precise answer.

However, what we can do is imagine the increased demand for decentralization and hope that Ethereum’s value will follow accordingly.

Will Ethereum Price Go Up After Staking Release?

Most analysts agree that the switch to PoS will be followed by a short-term bull run for Ethereum. While anything is possible with cryptocurrencies, the increased demand and reduced supply due to locking ETH should result in a price increase.

Most probably. We don’t know exactly when, as it depends on how successful the shift to PoS will be. It also depends on the adoption of blockchain technology.

Finally, competitors should be kept in mind as well. There are very capable companies that are working on their own decentralized solutions (like Binance and NEO) that could threaten Ethereum in the long run.

How Much Will Ethereum Be Worth If ETH 2.0 Is Postponed Again?

If the update is delayed once again, it might hurt Ethereum’s price. The extent to which that would be true depends on the gravity of the problems that caused the delay.

The uncertainty could drive investors away from Ethereum due to a lack of transparency and their inability to stick to their roadmap.

Still, when considering complex networks like Ethereum, a bug-free version of the staking model should be a priority. Postponing ETH 2.0 would be a lesser evil than releasing a vulnerable network.

Where can I check crypto prices in real-time?

The most popular crypto listing website in CoinMarketCap but you can get the real-time prices at CoinCodex.