Has the Hyperbitcoinization Started? Looking at the facts

The Bitcoin network has already absorbed nearly $1 trillion in monetary value since its inception. This amount keeps growing as the current financial system seems to weaken. Excessive money printing, record-high inflation, and an artificial prop-up of real estate and stock markets lead the public to an important quest – finding the “hardest” form of money.

So what will happen once the whole world finally wakes up to the realization that Bitcoin is the hardest form of money available? Many believe that we are already undergoing a hyperbitcoinization phase, an event unlike anything we’ve seen in the past. And in this article, we will be delving into its specifics. Let’s get started!

As network effects continue to grow the value and usage of BTC, many believe that it is simply a matter of time before the popular cryptocurrency replaces the outdated financial systems and inflationary FIAT currencies with a more democratic and transparent alternative.

The theory of hyperbitcoinization has been one of the main arguments of investors with high conviction and has therefore taken multiple names and descriptions over the past. Since the early days of crypto, we have seen the concept being described with many different names, among which: The Bitcoin Standard, The Bitcoin Black Hole, Bitcoin-Induced Demonetization.

To better understand the stages which Bitcoin has to go through in order to become the dominant world currency, we first have to look at some of the worst cases of hyperinflation. Of course, this short article does not aim to analyze everything in a few short sentences, so we will add a few additional reading recommendations.

First stage: Inflation gets out of control

Historically, the worst case of hyperinflation was observed in Hungary in 1946, as a result of war-induced production decrease. The monetary printing that occurred during this period led to a 50% decrease in the value of money every 15 hours. In time, wages dropped by 80% in actual value and the working class was pushed into poverty. To solve the issue, the government had to introduce a new, inflation-adjusted currency.

Another popular case of hyperinflation occurred shortly after the First World War in the Weimar Republic (Germany). The country had temporarily removed its currency’s peg from the Gold Standard to fund its war activities, convinced that they would win the war. Unfortunately, they lost the war and were forced to pay a large sum of damages in 1922. To cover their debts, they proceeded to excessive money printing, and the value of their currency crashed. 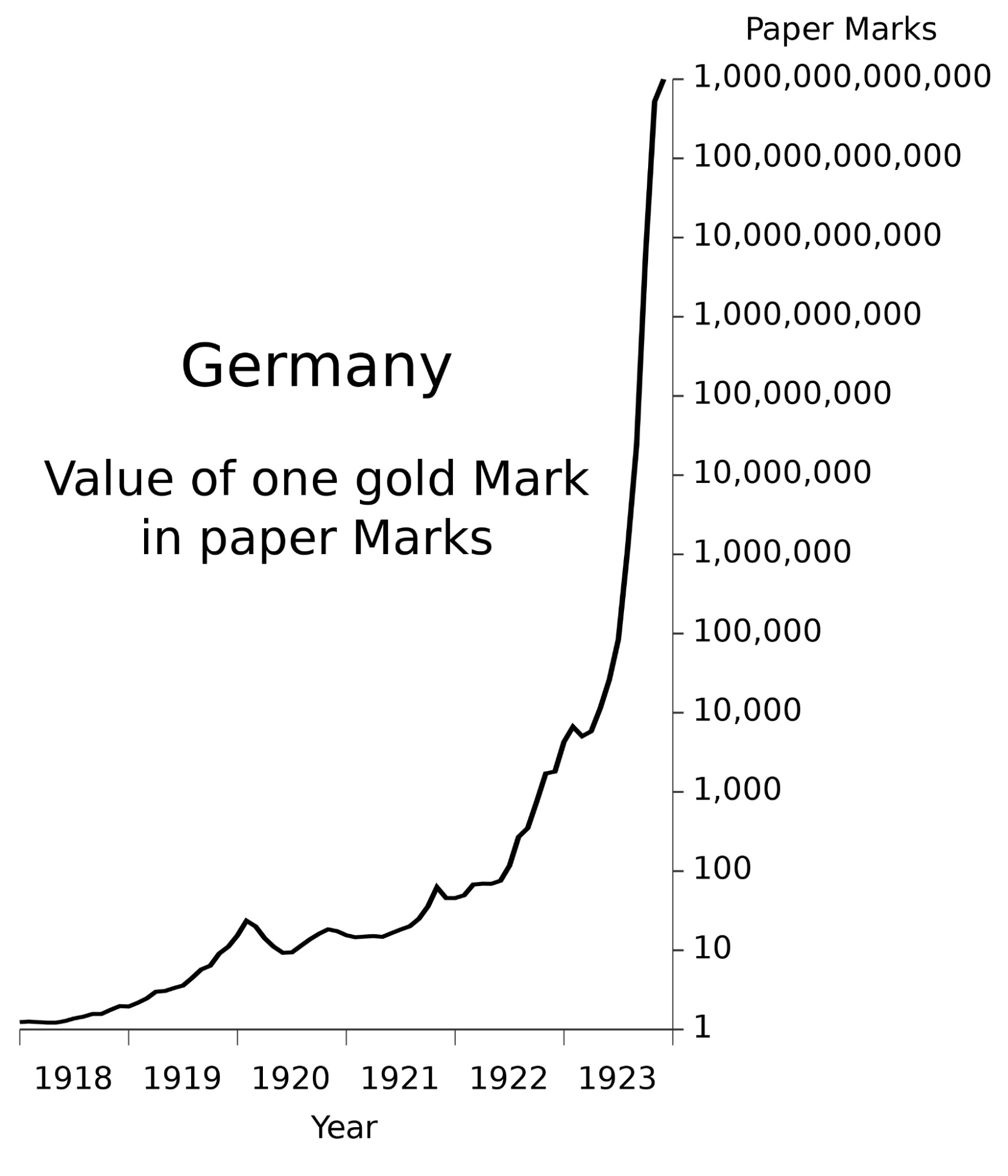 More modern examples of hyperinflation include Zimbabwe, Argentina, and Nigeria, all of which are facing extreme economic difficulties, with high levels of poverty.

Second stage: The population is looking for safe-haven assets

In order to protect their wealth from rapid depreciation, individuals and corporations try to place their money into assets that are not artificially inflated and do not lose their value over time. Now, many will argue that the majority of investment opportunities are artificially inflated due to the injection of capital into the system (e.g. stocks, bonds, real estate) in order to seemingly present a healthy economy. There is some truth to that. But that still leaves two available options including:

Since Bitcoin poses significant advantages over precious metals (as you can read in more detail here), the public will inevitably choose to place its bet with the winning horse. This process has already started, as many legendary investors that used to be against Bitcoin, are now promoting a 5% allocation.

Third stage: Everything collapses into Bitcoin

In time, we expect to see the following:

With the current economic instability, an eventual bitcoin standard seems inevitable. To precede the collapse of FIAT currencies, high net worth individuals and corporations are now lending money (FIAT) at very low rates in order to “front buy” Bitcoin, thus increasing their exposure. But there are many more hints you can look at to strengthen your conviction.

The path towards a bitcoin standard

When talking about hints, we mostly refer to events in the geopolitical landscape that have economic ripple effects. Some are more obvious than others, and most are only expected to continue as governments continue printing money at irresponsible rates.

While most analysts try to figure out whether the current volatility in market prices is the result of inflation or simply the fear of it, we are already starting to see our money devalue.

The consumer price index (CPI) has been rising steadily on the yearly charts, with some countries being more affected than others. However, overall, we have witnessed an increase in food prices, gasoline, steel, lumber, and others. 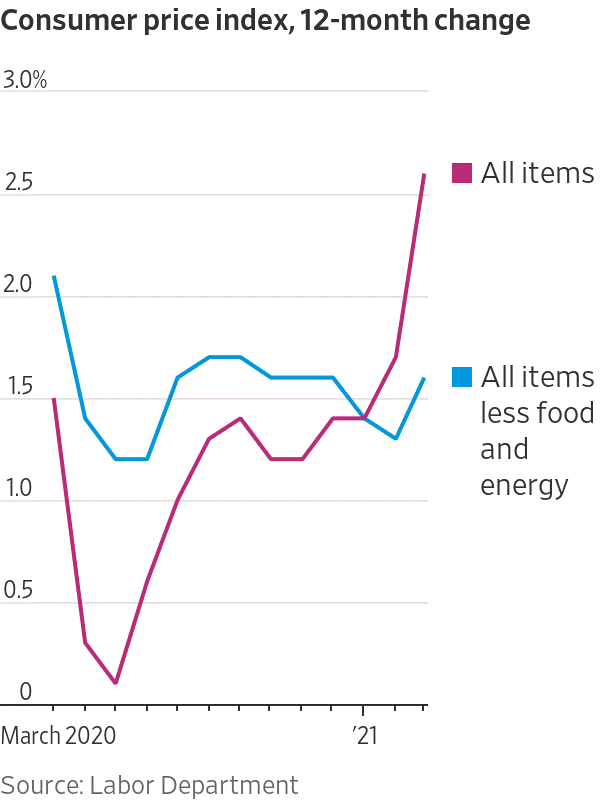 The post-pandemic world has also developed another real estate bubble, with housing prices growing in the double digits in 12 countries. Naturally, the countries with the highest level of inflation experienced the largest increases in home prices (e.g. Turkey).

With more quantitative easing (in the trillions) being proposed by the US government, many are worried that the prices of pretty much everything will continue growing upwards.

Are we going to see a repeat of 1929 or 1946? It would be foolish to ignore the possibility of hyperinflation.

Since we are currently still facing limited production of value on a global scale due to the lockdowns, it is hard to measure real inflation and unemployment rates. What we can do, however, is take into consideration that history tends to rhyme, and trust reliable information sources.

Latin American countries are among those hit hardest by inflation and are essentially being bullied by world powers and the US dollar.

Just a few weeks ago, the president of El Salvador, Nayib Bukkele, proposed a bill that would make Bitcoin legal tender in the country. The bill received the supermajority of parliamentary votes and the country became the first to recognize Bitcoin as money. They are now offering $30 free BTC to any citizen that downloads their government-based wallet to stimulate adoption.

According to Max Keiser, “The decision to adopt Bitcoin as legal tender will lead to economic growth, and could 10x the country’s GDP over the next few years”. As he also predicted, the positive impact of Bitcoin in the country caught the attention of politicians in several other Latin American countries as well.

Paraguay’s 🇵🇾 Deputy of the Nation, and Member of Congress, plans to present a #Bitcoin bill next month.

Paraguay is now the second country that plans to introduce a similar bill, hoping to legalize the use of Bitcoin as a currency within the country, and politicians all over LatAm are switching their Twitter avatars to include “laser eyes”.

It is now more clear than ever before that Bitcoin is attaining a state of geopolitical significance, which further increases the odds of an eventual hyperbitcoinization. Back in 2019, we predicted that countries would start to see the value of Bitcoin and eventually start accumulating it as a hedge against financial collapse. We expect that this will become more evident in the next few months.

Hints about Africa following the trend

Earlier this year, you might have come across a video showing a Nigerian Senator expressing his concerns for the growth of Bitcoin. You can watch the clip here. Shortly after this clip went viral, the country of Nigeria imposed a banking ban on Bitcoin to slow its adoption rate. The decision, however, had the opposite effect, and peer-to-peer trading exploded in the country.

Feels so good to see leaders all seeing the path forward. Africa is already leading adoption with their governments working against them. The pressure is building and soon we shall have a massive cascade of adoption that will shock the world 🌍! https://t.co/JjJSXY39ma

It is now estimated that 32% of Nigerians own cryptocurrency, and the government is pressured to take a more positive stance to save its economy from collapsing. Both Ray Uwaifo and Jack Dorsey believe that the popularity and adoption of Bitcoin in the continent will eventually lead to the continent’s prosperity, which will reflect in financial, educational, and infrastructure growth.

In closing, it is important to take a bird’s eye view and look at everything from a macro perspective. Microstrategy recently purchased another $600 million dollars of BTC and now holds more than 0,5% of the total supply.

With 2,3 million coins available on exchanges, we would only need 23 corporations or high net worth individuals with a similar conviction for all the tradable Bitcoin to become unavailable. This theory is also popular among experienced analysts and is often referred to as the supply shock. Even if we don’t see massive corporate action, the available coins will eventually be bought by long-term holders, making it nearly impossible to own real BTC.

Adding to that, it is important to briefly talk about the recent on-chain movement of coins. William Clemente has done an excellent job analyzing the movement of bitcoin from weak hands (new buyers) to strong hands (long-term holders) using multiple data points. You can check out his work on Twitter, read some of his content on Bitcoin Magazine, or watch one of the many podcasts he partakes in. Here is one of the most relevant episodes to the argument made previously.

Are we headed towards hyperbitcoinization? By looking at the current economic instability it seems highly likely. Yet, logic can hardly fathom the idea. All we can do right is wait and see how governments continue to handle the weakening of their currencies, while simultaneously opting out of the system in the way we know best – choosing to buy bitcoin.