For many investors, XRP has been relatively quiet over the past two years. The cryptocurrency didn’t make any significant headlines to bring back the enthusiasms and, as for its loyal fans… *crickets*.

In the past few weeks, however, Ripple has managed to make quite a comeback. XRP dominated headlines in November as it rallied 169% during the last month alone, claiming the number 1 spot on Coindesk’s Top 20. 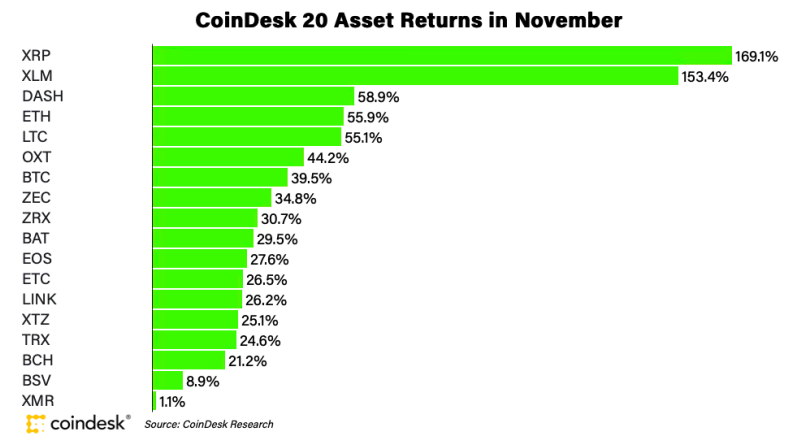 Today, we discuss the reasons behind this unexpected price surge, the recent developments surrounding XRP, as well as realistic Ripple price prediction estimations based on the prior. Are you ready to find out where XRP is headed? If so, keep on reading.

As Ripple is fighting to break the $0,70 price barrier, there are several developments that could either push it towards new highs or cause sell pressure. These are mainly played out on the sentiment of (new) buyers, as many rush to benefit from the rumors.

From all the developments listed above, the main reason behind the rapid surge of XRPs price is the upcoming airdrop that is set to occur in just a few days (at the time of this writing). While there is no information regarding the value of Spark tokens, it is well known that such large-scale airdrops can cause a massive increase in the native cryptocurrency.

Knowing this, it might be interesting to try and estimate where Ripple’s price will be headed in the next year(s) and how investors can benefit from this.

Will SEC charges against Ripple affect our XRP price prediction?

Late last year, the Securities and Exchange Commission sued Ripple for trading XRP, as they concluded its nature to be that of a security instead of a cryptocurrency. Naturally, this caused a massive drop in XRPs price. In just a few days, the cryptocurrency lost more than 60% of its value before attempting to recover back to its prior levels. In the midst of these events, several exchanges started delisting XRP, including Coinbase, Binance.us, and OKCoin. Despite this unfortunate setback, Brad Gerlinghouse mentioned that Ripple is still strong and continues hiring new team members.

2020 was a banner year for @Ripple, despite a disappointing ending related to U.S. regulation (understatement?). We processed millions of RippleNet txns, grew ODL 12x YoY and signed 15 new customers after the SEC complaint. 1/3 https://t.co/2efIQDojU7

2021 is just a breath away. The year so many investors have patiently been waiting for. If historic events play out in a similar manner, this will be the year of a new bull run in the crypto markets. And we all know what happens when the “altcoin season” starts!

Technical analysis points to the moon 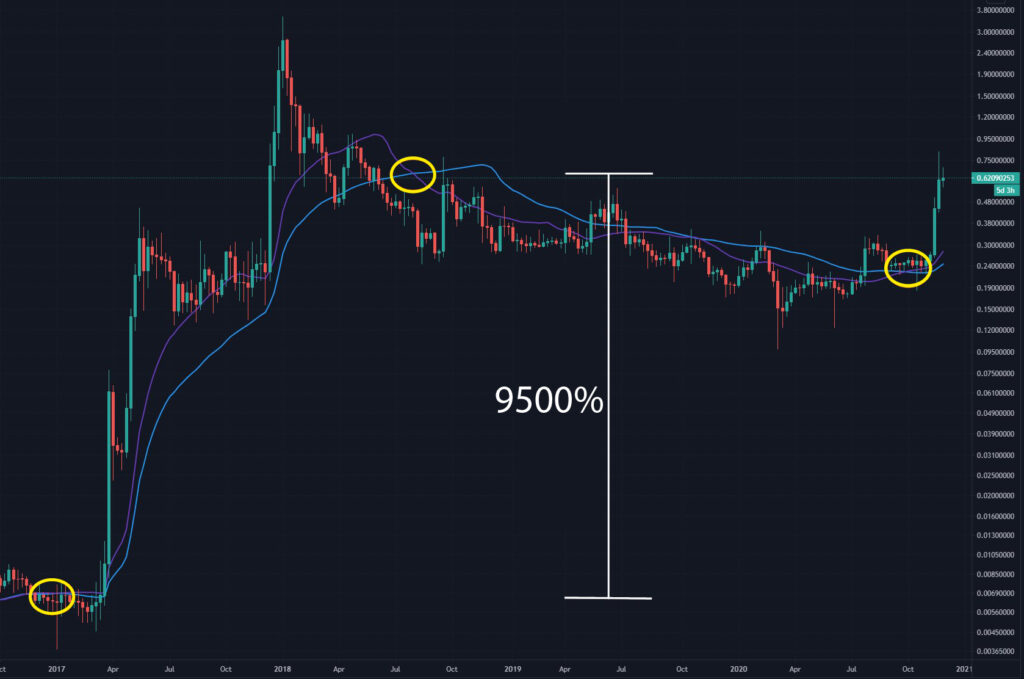 For most, these types of increases in price seem unlikely during the upcoming bull market. After all common knowledge points towards “smarter” investors that are less likely to gamble their money on low-priced tokens. That being said, XRP is in the top 10 of the most popular cryptocurrencies and has strong utilities. Therefore, a 9500% price growth to $22 wouldn’t seem so unlikely.

For others, $22 seems to be the low-end barrier of XRPs price potential within the next year. Several traders are already publishing their analysis on Twitter and, among them, XRPBULL2021 does so too. 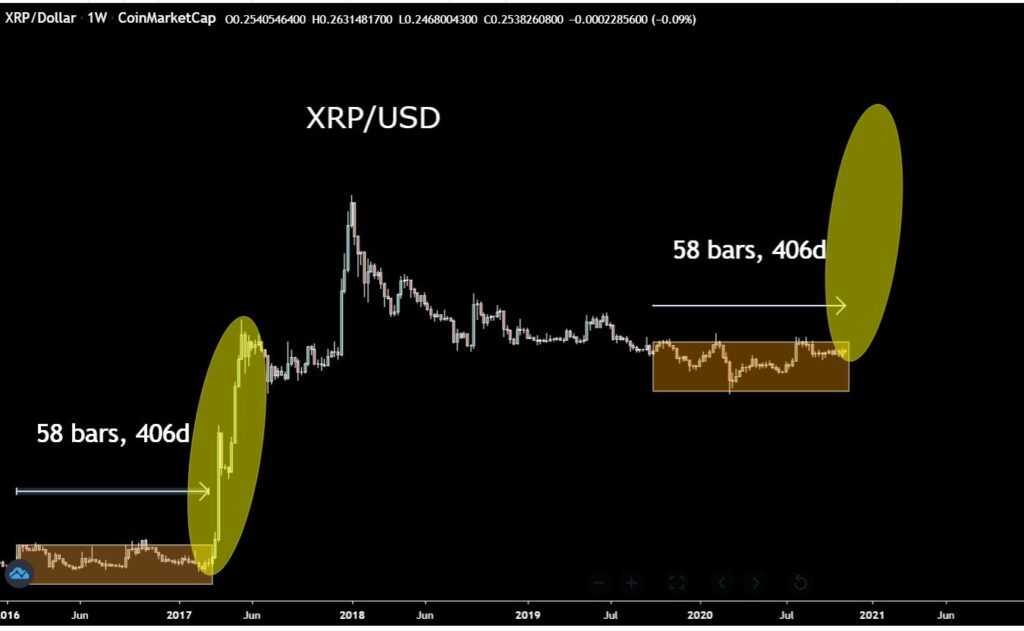 According to the trader, XRP is already starting to repeat historic patterns. His bullish sentiment and trading skills lead him to believe that XRP could reach $15 early next year and $100 by the end of 2021.

While this Ripple price prediction seems very far stretched, especially given the enormous circulating supply of XRP, it would not be the first time we witness hard-to-understand market movements.

Our XRP price prediction for 2022

You will probably wonder what we think about XRP within the next year. While we are optimistic, we have been around for quite a while already. We have seen the hype build-up. We have also seen it break down faster than it grew in the first place. Therefore, we are cautious and set low-barrier goals.

At this moment, we’d like to see XRP break $1 before the end of 2021. This would crush a significant psychological level that has kept many investors on the sidelines. If this happens successfully, and Bitcoin receives more adoption from institutions and the public, we believe that XRP could be headed towards $10 by the end of 2021.

In the context of cryptocurrency, a 4-5 year period is a very long time. Since the market as a whole is still at a price discovery stage it is really hard to give long-term price predictions. When it comes to making a prediction for XRP there are different factors that could affect the coin’s price. For one, Ripple needs to decide where they will station their operations, as their relations with the US are currently clashing. Once that is decided, the popular cryptocurrency will continue to strengthen its relations with banks on a global level, improving their speed and cost of transactions.

If the popular cryptocurrency project is successful, Ripple will gain foundational importance within the banking system, similar to how Ethereum is the foundation of decentralized applications. Its increased utility and strong fundamentals, paired with the increased demand for cryptocurrencies, could help XRP grow to $200+ per coin within the next 4 years.

Note that our Ripple price prediction 2025 is heavily speculative and should not be taken as expert advice – simply market observation. It is best to adjust your expectations and let market demand indicate the growth curve over time.

It is highly unlikely for us to make a reliable Ripple price prediction today with regards to the coin’s value over the next decade. Many could argue that the cryptocurrency could succeed in its mission to interconnect the banking system due to Ripple’s influence and utility in the space. Others are nearly certain that XRP is doomed to fail due to the rise of government-based stablecoins, which are now being explored with increased scrutiny.

As we already know, fundamentals are only one part of the equation. Market sentiment and, thus, demand is also very important for the potential of Ripple. If the foundation decides to pursue more aggressive awareness strategies and builds strong partnerships within the next few years, we could see the coin grow even further in value.

According to the Ripple community, there are three possible scenarios that could drive XRP to $589 within the next decade:

Additionally, many XRP fans believe that the recent Simpsons’ special on cryptocurrency predicts the future of the market. According to them, there are many hidden messages that point towards a massive price growth in the mid-term (could be a decade?). Here is the video we are referring to:

When it comes to making long-term price predictions on Ripple price, there are several tools and channels you can use to get information from. The following shortlist will help you start your research and discover more indicators to create your own forecast.

To determine the future Ripple value, we suggest starting out with TradingView. The charting tool allows for maximum flexibility that can, in time, lead to a better understanding of XRP’s historic price action. There are several price indicators that can be implemented in the charts to help you determine whether a trend is building up.

There are many different ways to track market sentiment in the crypto industry. However, for Ripple specifically, we have a strong preference for Twitter channel @XRPspeculation. The people behind the channel also have a Youtube channel that is updated frequently.

The big XRP dilemma for investors

XRP has been bashed by many investors over the years. For many experienced crypto enthusiasts, XRP is considered to be a “shitcoin” even though it poses strong fundamentals that could lead to global mainstream adoption. As of this moment find ourselves in a big dilemma:

Eventually, Ripple with either shine or fail depending on the direction the market takes. Whether it is today, this week, or a year from now, investors should be aware that the crypto markets will experience massive volatility. Their ability to read the signals will result either in riches or in an unsuccessful gamble.

If you feel ready to take the risk and believe in the future of Ripple, head over to our platform to buy XRP instantly. With near-instant transactions and a first-time no-fee policy, you will be able to acquire XRP at the cheaper market price.

Having observed the volatile trajectory of XRP over the past year and after the sudden rise of Bitcoin to the $40.000 levels, investors will likely wonder whether they should be investing in XRP or being better off choosing bitcoin instead.

Our XRP price prediction takes several external facts into consideration but it is important to remember that the space is rather unpredictable and volatile, meaning that our best guess is merely a speculation. Even though our XRP forecast is leaning towards being positive, it is best to diversify into multiple established cryptocurrencies, including Bitcoin. As the market continues to grow, you can always readjust the allocation of your portfolio to match the progress of Ripple and the results of our XRP prediction (speculation).

You should now have a better idea with regards to our Ripple forecast. After exploring all the recent developments and getting a better understanding of the coin’s historic price tendencies, we estimate the following: