The current cryptocurrency bull run has been extremely rewarding for patient investors. Since the beginning of 2021, we saw multiple coins make large returns, most of which were linked to the DeFi or NFT crazes.

However, one of the most interesting coins this year is a veteran of the space. Dogecoin, the meme that became a multi-billion dollar crypto project has caught the eye of technologists and celebrities alike, registering nearly 2000% growth since January.

Now that the price action has settled down, we can better analyze the recent spike in value, and offer our Dogecoin price prediction. To this end, we will first go through the fundamentals of DOGE, explaining its main benefits and drawbacks.

Then, after exploring the latest developments on the coin, we will provide a Dogecoin forecast combining our findings with sound technical analysis.

After reading this article, you should have a good idea of the future Dogecoin value and whether you should be investing short, mid, or long term in the meme cryptocurrency. Let’s begin with some basics.

Dogecoin was created back in 2013, by programmer Billy Markus and marketer Jackson Palmer.

Story of a meme – Rise of the DOGE

The creators’ main goal was to alleviate a bit of the seriousness of the cryptocurrency space. They wanted to provide a user-friendly medium to those unfamiliar with the ecosystem. To achieve this, they released a new cryptocurrency themed after the popular Shiba-Inu Doge meme.

DOGE veered away from the complicated narrative of Bitcoin and Litecoin and proposed a fresh and fun entry into the world of crypto.

Compared to its peers, it had very little to do with the “get rich quick” investment mindset. Instead, it was accepted by the community as a safe and cheap way to tip content creators on the internet.

In a short time following its creation, DOGE experienced massive success, surprising even its creators. Thanks to its meme status and the established popularity of its logo, coins spread like wildfire. Only a few weeks after its release, DOGE’s market cap surpassed $14 million. At the time, it rivaled some of the best-quoted cryptos, entering the top 10 by market cap by January 2014.

Strengths and weaknesses of DOGE

Over the years, DOGE has been through multiple cryptocurrency cycles. Although the technology behind the coin is unappealing compared to more recent projects, some major factors have contributed to its ongoing success.

When trying to understand our Dogecoin price prediction, you should take the following factors into consideration.

The Dogecoin community is regarded as one of the largest and warm-hearted in the entire industry. Through the Dogecoin foundation, users have participated in many charitable actions such as:

While these efforts might have been modest, they managed to draw attention to Dogecoin. They helped its creators build a solid community around the meme cryptocurrency over the years.

Furthermore, Reddit is also a major factor contributing to DOGE’s survival. Thanks to its low price entry, it has become a popular cryptocurrency for tipping members of the website.

Dogecoin’s success comes mainly from the huge media attention it has been getting. In addition to the aforementioned crowdfunding projects, there has been some stirrup from multiple social media sources, this year in particular.

Then, eminent social media personalities like Tesla’s CEO, Elon Musk fueled this positive momentum of Dogecoin price with bullish tweets. Musk first tweeted “Doge” and immediately followed up with more bullish tweets like this one:

Dogecoin is the people’s crypto

A series of tweets from other celebrities such as Snoop Dog and Gene Simmons followed, contributing to DOGE’s growth. Мillions of followers responded by buying DOGE coins and the price picked up, temporarily reaching a new all-time high of $0.1.

Of course, all of this social media attention drew some mainstream media coverage, increasing the crypto’s reach even further. As such, DOGE’s price entered a new rally, reaching $0.75 at its peak, right before Elon Musk’s appearance on skit-show Saturday Night Live.

Like most first-generation cryptocurrencies, Dogecoin’s usage is quite one-dimensional. Similar to Bitcoin and Litecoin, DOGE can be used to transact value over the internet securely, but that’s pretty much its only use.

There aren’t any innovative technologies behind DOGE, such as smart contracts or DeFi capabilities. This could decrease the appeal of the meme crypto in the future.

Unlike most cryptocurrencies on the market, DOGE wasn’t designed as a deflationary medium of exchange. Bitcoin, for instance, is limited to a total supply of 21 million coins that will ever be put in circulation.

Dogecoin doesn’t have a capped supply meaning that, theoretically an infinite amount of DOGE mined over time. This could dilute the value of each token considerably in the long run.

It is also worth noting that Dogecoins are mined in tandem with Litecoin, providing 10.000 DOGE for each new block discovered. As such there are more than 120 billion DOGE coins in circulation at the moment, with this supply increasing by 10.000 units each minute.

The top 20 Dogecoin addresses own more than 40% of the cryptocurrency, with 1 address holding 27% of all DOGE.

This highly centralized ownership could be detrimental for DOGE holders. The main wallets could coordinate a dump of tokens and crash the price of the meme crypto in the process.

Dogecoin has been more or less abandoned by its creators. However, some recent developments positively influence our Dogecoin price prediction.

All in all, we can conclude that Dogecoin’s price is still overly dependant on hype. And if 2021 taught us something, it’s that hype can still be a powerful tool in this ecosystem.

The currency still sees increased interest from newcomers in the space and it has been able to retain its popularity after all these years. It has succeeded where other, more promising projects, have failed.

Next, and in order to provide an accurate Dogecoin price prediction, we need to have a look at what happened to DOGE’s price over the years.

Ever since the coin’s release, its existence has been peppered with huge price pumps, followed by a severe loss in value thereafter. 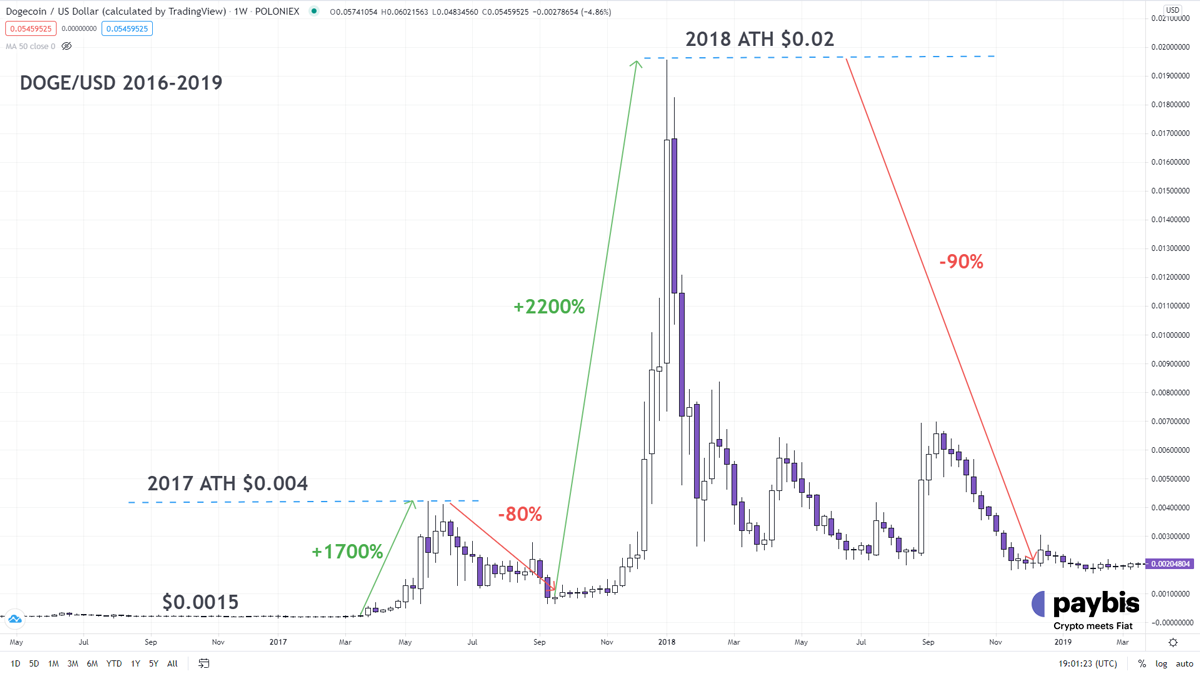 Then, during the ICO craze in December 2017, the price went up by an astonishing 2200%, reaching an all-time high of 2 cents. However, during the bear market that followed, the price consolidated 90% lower. 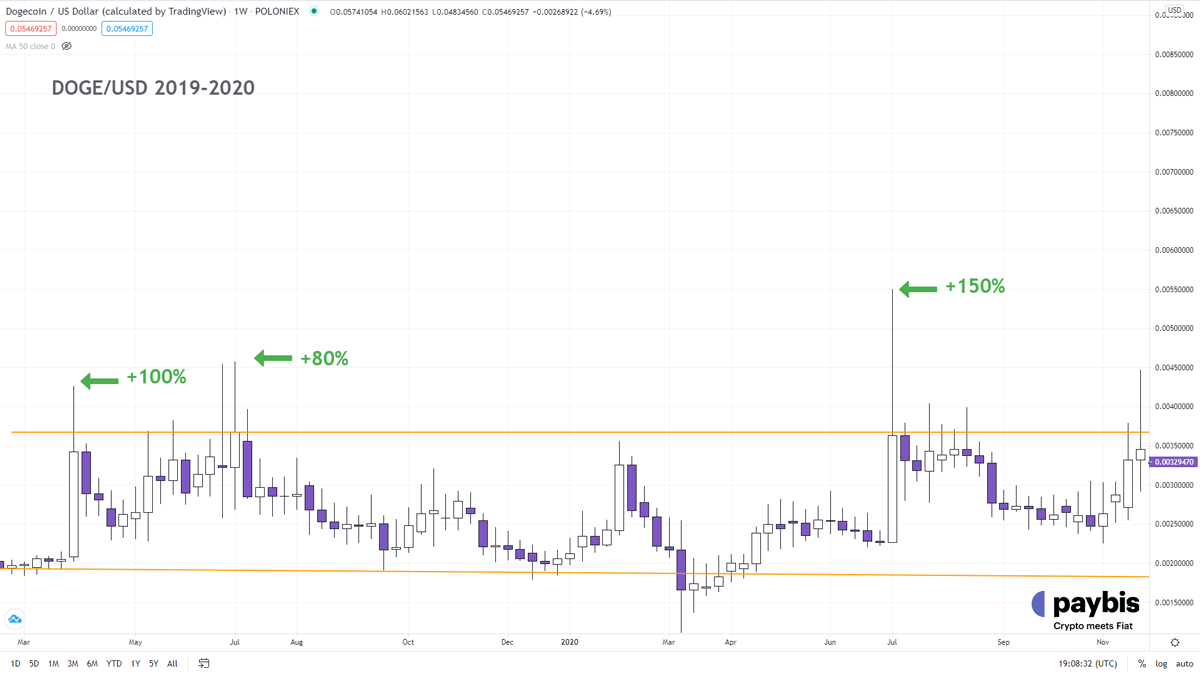 The price then entered a horizontal trading channel for the better part of the next two years. This relatively mild price action was occasionally interrupted by sudden community-driven price surges like the TikTok Doge challenge that drove prices up by 150% in July 2020.

However, nothing had prepared the experts in the industry for what would happen in 2021. 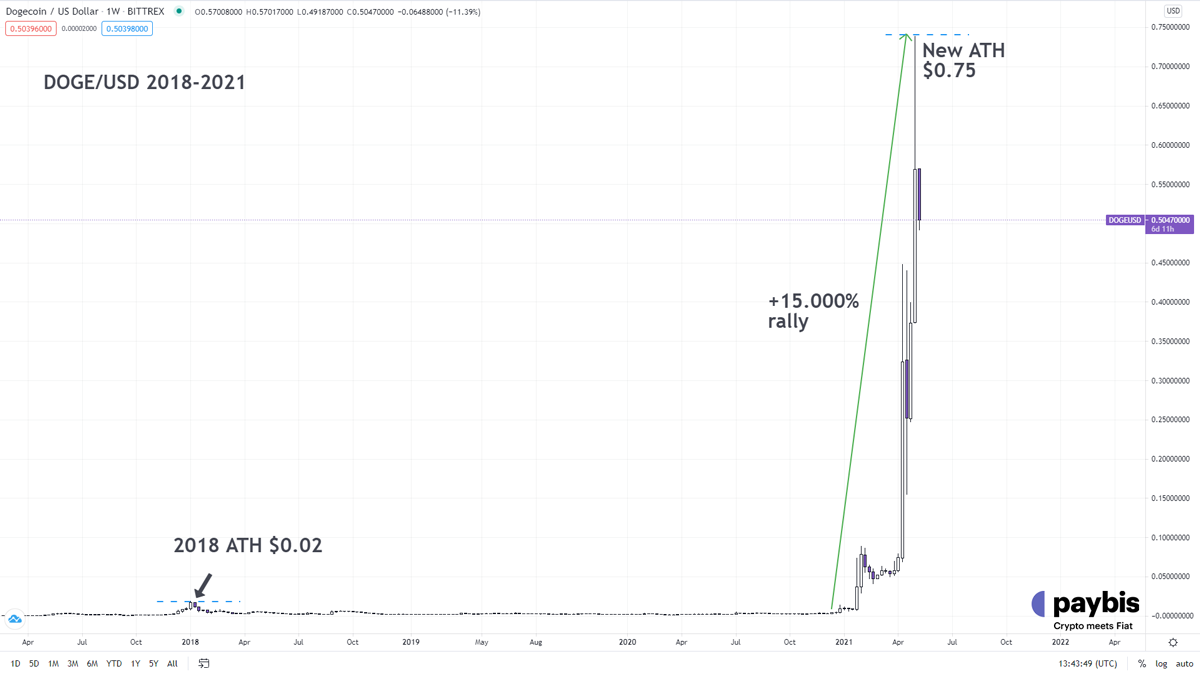 Following the events we previously mentioned, the price of DOGE surged more than 15.000%. In May 2021, it reached a new ATH of $0.75, reducing the 2017 bull run to a blip on the charts. The price has since retraced by 35% but seems to be preparing for another leg up towards the $1 level.

In the past, the price of Dogecoin has closely correlated to that of Bitcoin. And many indicators show that the original cryptocurrency is on the way to reaching six figures this year.

Even though the market has been consolidating in the past few weeks, we remain quite bullish in our Dogecoin price prediction for 2021.

Everything seems to set up DOGE to reach the $1 mark sometime during the summer of 2021. Even after the current retracement, the market sentiment remains quite positive, and should bring the price of DOGE above the current ATH.

By the end of the year, we could see DOGE race above $1.15, and possibly reach the $1.5, doubling the current ATH level. 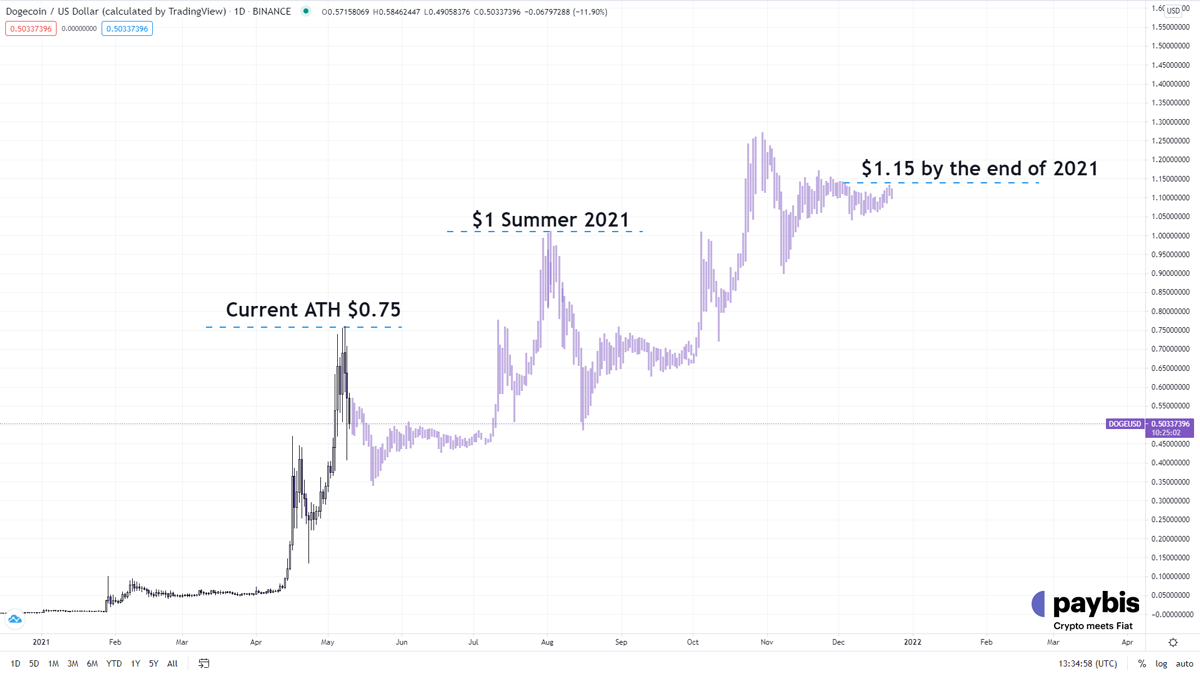 While this could mean a market cap of over $200 billion for Doge, we need to keep in mind that the crypto markets as a whole are increasing in value. As such this makes its market cap rather small in correlation with the progress of other projects.

Giving an accurate Dogecoin price prediction for 2025 is quite challenging. This is mainly due to the heavy reliance of the DOGE cryptocurrency on hype and social media attention.

However, we can factor in several important events that would have happened by then, such as:

With all that in mind, our long-term price prediction gives another 2000% price increase for DOGE at the top of the supposed crypto bull run of 2025.

This should equate to a price of $1.1 for DOGE in 2025, once again going above the dollar threshold.

Looking 30 years into the future is next to impossible considering the ever-evolving blockchain technology.

By then, trillions of DOGE might have been put into circulation diluting their value considerably. At the same time, Musk’s dream to make Dogecoin the official currency of the planet Mars might have succeeded.

So, it would be pure science-fiction to speculate on an accurate Dogecoin price prediction 2050.

Comparing our dogecoin price prediction to what other experts in the industry think should help broaden your view on DOGE. 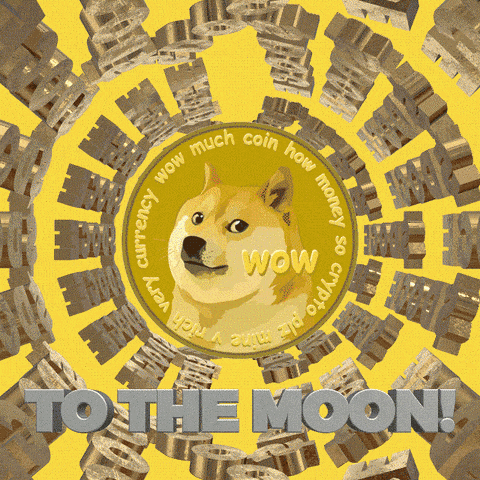 Our Dogecoin price prediction is the personal opinion of our writers and analysts, and as such shouldn’t be followed to the letter. Instead, we propose you do extensive research on DOGE before you decide to invest in the meme crypto.

Below are some of the best tools and price trackers that can allow you to conduct a proper technical and sentiment analysis.

In this article, we went over the basics of the Dogecoin cryptocurrency, how and why it was created and some of its main strengths and weaknesses.

Furthermore, we explored in detail how social media is usually the driving force behind incredible DOGE’s price surges. We connected these fundamentals with some sound technical analysis that allowed us to provide you with a Dogecoin price prediction as follows:

It’s easy to say that DOGE is one of the most influential cryptocurrencies at the moment. Its meme status and bullish cycles have drawn many newcomers to the crypto industry.

Furthermore, its social media reach is not to be taken lightly and has contributed to the increased adoption of cryptos as a whole.

With that said, most crypto experts don’t count on DOGE to make considerable profits. However, DOGE remains a fun coin to hold onto, which can sometimes provide some great opportunities.

Just take note that its extreme volatility and tendency for considerable price drops make it a very risky investment.