Nearly two years ago, we shared our bullish Bitcoin price prediction – we estimated that the popular cryptocurrency would surpass $100.000 before the end of 2023.

Since writing the post, more than 50.000 people have read it, and many are asking for a follow-up. They want to hear our updated thoughts on our Bitcoin 2021 prediction. This is exactly why we wrote this article.

In the next few paragraphs, we will share our purely subjective viewpoint based on our current view of the global macroeconomic trends, and how these will affect Bitcoin in the years to come. After reading this post you will know our current viewpoint and expectations for the years ahead of us.

2020 – The year that changed everything

When we wrote our first price prediction article, we spent countless hours studying macro-economic trends and the position of Bitcoin within them. Keep in mind that, during this time, Bitcoin briefly climbed to the $14.000 levels in an unsuccessful attempt to reclaim its ATH. 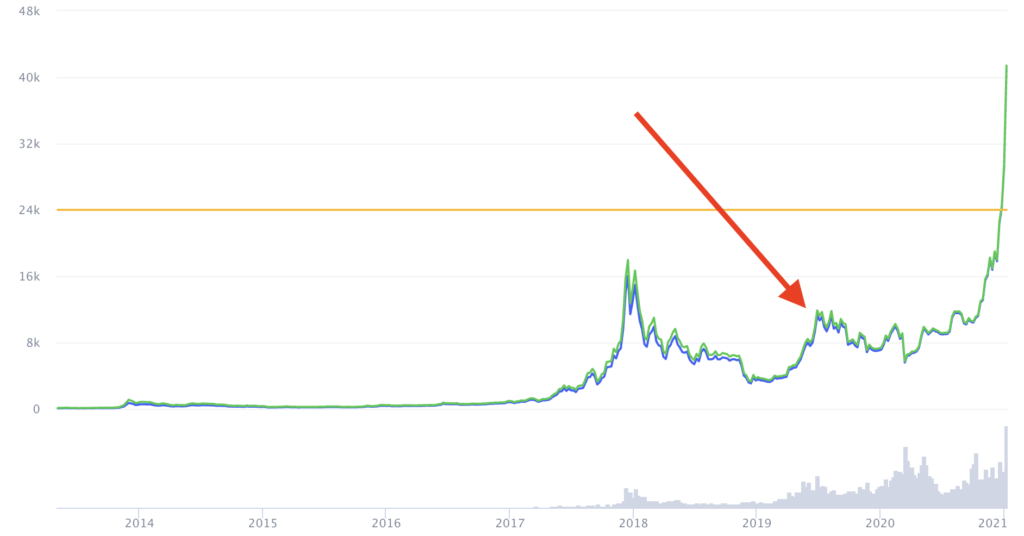 Our main argument for the growth of the cryptocurrency was:

And that’s pretty much it…

Then, one of the most devastating and unpredictable years of our lifetime came around – 2020.

A year fueled by economic and political uncertainty – one that made 2008 seem like a child’s play. In just one year, we saw:

Let’s take a better look at the events of this year, and how they affected the growth of the cryptocurrency markets.

While Bitcoin briefly followed the stock market decline during the crash experienced in March 2020, investors quickly understood that Bitcoin is an uncorrelated asset that is not linked with any other investment opportunity.

This was the initial “kickstart” of a massive growth curve in its price. Shortly after recovering from its lows, we experienced the Bitcoin Halving, an event that historically increases the value of Bitcoin.

Sure enough, Bitcoin continued to grow after its reward halving and is now worth nearly 5 times more than it was at the time.

This is not just a repeat of historical patterns. The price action is strongly correlated with the actions of global governments in response to COVID19.

During the months following the first wave of lockdowns, governments across the globe engaged in money printing, unlike anything we have seen before. Trillions of dollars were injected into the economy to bail out the traditional financial system. 35% of all USD in circulation were printed in 2020 alone.

Here’s the graph of the USD supply over time, to help you get a better understanding of what is happening: 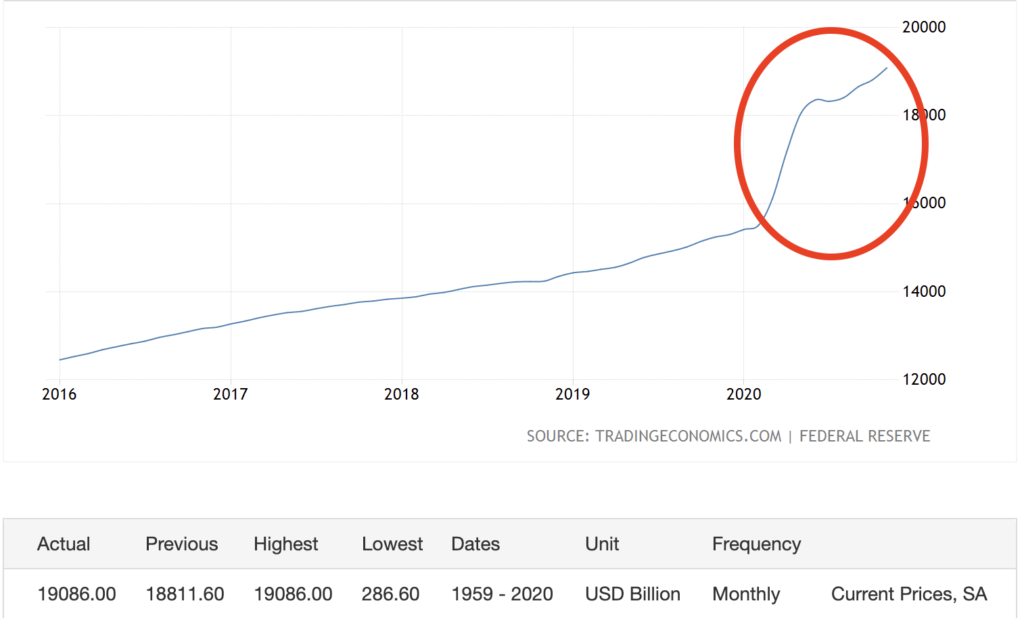 Governments are engaging in money-printing practices fully aware of the inflation effects these will have on their currencies.

And while most people would be forced to lift their hands up in desperation, it became Bitcoin’s moment to shine as the digital lifeboat of wealth preservation.

Bitcoin is specifically built to act as a safe haven asset for those who don’t trust the actions of their governments of central banks. This offers an unprecedented opportunity for those that are aware of Bitcoin’s true nature. In other words, it is made for moments like these!

Institutional adoption – The theme of 2021

Back in 2017, institutions and high net-worth investors were highly skeptical of Bitcoin’s long-term potential.

Today, this is no longer true. Institutional investors are now aware of Bitcoin’s benefits over gold and adjust their portfolios and balance sheets accordingly.

In an attempt to escape the inflation of the USD, he invested MicroStrategy’s balance sheet into Bitcoin. It was the final vote of confidence that institutions needed to enter the space.

Shortly after his bold move, other public companies joined him as well. Square invested $50 million of their balance sheet, Paypal and CashApp enabled crypto purchases, and soon enough everyone was talking about Bitcoin again.

Retail interest seems to be spiking as well, as we can see when checking how “bitcoin” ranks in Google Trends:

At the moment of this writing, the miners of the Bitcoin network create 900 bitcoins per day. This number is halved every four years, as the asset continues to grow in popularity and price.

Why is this important?

Today, we already see institutions buying more than 900 Bitcoin each day. Paypal and CashApp alone are purchasing more than the available supply and we are still very early in the institutional adoption curve.

Very soon, all institutions will need a Bitcoin strategy. Every institution will be forced to have exposure to Bitcoin in order to ensure its long term survival in response to the current economic instabilities.

In many ways, it reminds us of the dot-com bubble, which eventually forced every institution to create an “internet strategy”.

But institutions are not the only ones who need exposure. Banks need it as well. Just a few days ago, Morgan Stanley purchased enough Microstrategy shares to now own 10.9% of the company. This reflects to more than $300.000.000 worth of BTC. And let us not even get started on Tesla’s bullish move towards Bitcoin. The company decided to invest 15% of its liquid cash reserves into the popular cryptocurrency.

What does this mean for the price of Bitcoin?

We already know that the new supply will drop to 450 coins per day sometime in 2024 due to the next halving. At that time, institutional participation will be significantly larger than it is today. This will lead to the gradual removal of Bitcoin from exchanges. While this may sound shocking, it will occur in several phases:

Bitcoin is going through a supercycle

If you’re like most people, you probably heard about Bitcoin during its latest peaks (2013, 2017, etc.). Generally speaking, each market cycle of Bitcoin has a duration of 4 years and mainly measured through its halvings, which reduce the newly minted supply.

Satoshi Nakamoto predicted that the increased demand of users paired with a gradual reduction in the supply would drive its price upwards:

“ As the number of users grows, the value per coin increases. It has the potential for a positive feedback loop; as users increase, the value goes up, which could attract more users to take advantage of the increasing value”

We can see how these cycles play out over the 12-year lifetime of Bitcoin when observing the logarithmic chart: 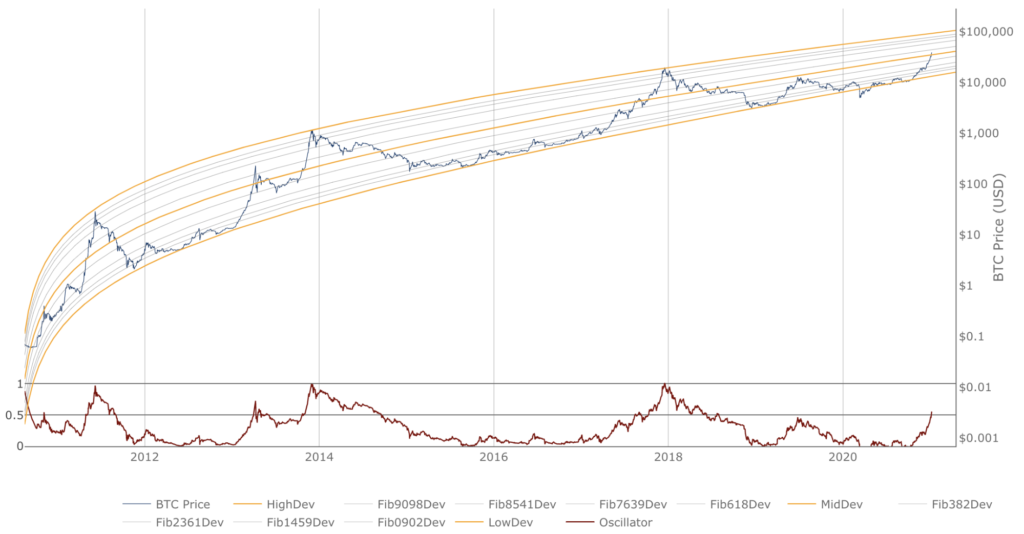 That being said, the narrative today is completely different from the one we experienced in 2017. Bitcoin is now seen as a:

Instead of a normal bull market that follows the logarithmic curve, this could hint at a potential “supercycle”, one of unprecedented growth that is further strengthened by HODL FOMO.

The 2017 run was driven by short term retail and trader speculation, a fear of missing out on fiat gainz.

This run will be dominated by fear of missing out on adoption of bitcoin as a reserve asset, by individuals, corporations, and even nations.

The seasoned investors among us all agree that Bitcoin was made for this moment. This is not a gamble; it is not “luck”. It is the beginning of a cycle that is unlike any other. One where a large part of the $100 Trillion currently managed by institutions flows into bitcoin in hopes of preserving its value.

When (not if) this happens, our $100.000 prediction will no longer be the target. We may see Bitcoin going from $45.000 to $1.000.000 in a very short timeframe, afterwhich the currency will be established as a global store of value that everyone trusts and believes in. Following this massive growth cycle, we can only expect smaller growth cycles to occur, similar to the way gold is growing at the moment.

How will the public react?

Keep in mind that Bitcoin’s growth will not come without any pushback from traditional institutions. Bitcoin’s increase in power and leverage during a period of rapid inflation (paired with regular cheques to the US population) will most likely cause a pushback.

Once the trillions of dollars stimulus plan starts working its way through Congress, we’re going to see #bitcoin twitter get the shadowban. They will say that both the soaring price of bitcoin & the toxic memes are undermining faith in their free money programs.

We may see an increase in FUD from the mainstream media to encourage investors from investing in the popular cryptocurrency. This is not news to those who have already experienced one or more market cycles – the optimism of mass media usually starts shortly prior to a bitcoin crash.

As an individual who wishes to protect their assets and wealth, it is your responsibility to better understand the importance of investing in Bitcoin at the current point in time. The sooner you decide to invest, the sooner you can make compounding interest work for you.

As a closing note let’s briefly touch upon the year ahead. 2021 may finally be the year that we experience a global “awakening” of institutions, governments, and retail investors to the potential of Bitcoin. One which will lead to a decentralized distribution of wealth and new generation of billionaires. So make sure you do your due diligence and invest responsibly.