Enjin Coin Price Prediction for & Why You Should Get Some

In the current market cycle, there have been many factors that contributed to the price increase of cryptocurrencies. The institutional interest in Bitcoin brought the entire market more legitimacy. Then, the evolution of the DeFi market provided additional opportunities to make passive income.

That said, one of the biggest market drivers was the emergence of NFTs. Consequently, many blockchains that focus on NFTs have grown considerably in value since the beginning of the cycle. One of these projects is Enjin Coin.

In this article, we provide a thorough Enjin Coin price prediction. We analyze Enjin Coin’s fundamentals and lay out the pros and cons of this project. Additionally, we cover developments in its ecosystem that could have an impact on the price, as well as the NFT market as a whole.

Finally, we will apply these findings and combine them with some sound technical analysis to give you the most accurate ENJ price prediction possible. So let’s delve in, shall we?

What is Enjin Coin?

Enjin Coin was launched in 2017 by co-founders Maxim Blagov and Witek Radomski through a successful ICO that brought in $19 million in funding. The project’s goal appealed to investors as it was one of the first blockchain solutions focusing on gaming.

The initial idea was to provide a platform where gamers could manage in-game items as NFTs. This would allow them to have proof of ownership of everything they accomplished in their favorite game. Consequently, players could resell their hard-earned items or characters on the open marketplace and make profits through this mechanism.

Their first functioning product was the revolutionary Enjin wallet. At the time, it was one of few mobile wallets to offer non-custodial management coupled with integrated decentralized exchanges such as Changelly. More importantly, it offered a one-stop shop for managing popular cryptocurrencies, ERC-20 tokens as well as NFTs created on its protocol.

Next came the SDKs, which allowed developers to integrate Enjin NFTs into their games. However, there was one major advancement that separated Enjin from other projects of its type.

How did Enjin innovate the NFT ecosystem?

This is especially useful in games, as developers can create the in-game currency (e.g. gold coins) to be fungible. At the same time, the blockchain records the other unique items or characters as NFTs.

The smart contract itself has advanced features, which allows developers to define complex interactions with the NFTs. For example, they can program them so that the owners can rent, combine, loan, or even destroy the NFTs in their possession. This effectively leads to a metaverse where the gaming economy could depend on this type of smart contract alone.

How does the ENJ token work?

Like with any other cryptocurrency, users can buy and sell Enjin to make profits speculating on its price. However, the use cases within its ecosystems are far more interesting. You can use ENJ to:

All in all, ENJ is a multipurpose cryptocurrency, ideal for creating and managing NFTs.

Advantages and drawbacks of Enjin Coin

Before we go further with our Enjin Coin price prediction, let’s have a look at the main pros and cons of the project.

The ecosystem is quite versatile and brings the following benefits to its users:

With that said, we need to mention some important drawbacks, all of which partially impact our Enjin Coin price prediction.

With that said, the development team has been continuously working on improving upon these shortcomings. We follow our Enjin Coin price prediction with the latest network upgrades that should solve most of the aforementioned issues.

Major updates in the Enjin ecosystem

To continue our Enjin Coin price prediction, worth noting are the following present and upcoming upgrades of the Enjin ecosystem.

JumpNet is a layer 2 scaling solution for Ethereum, created specifically to accommodate Enjin users. Once the user moves their ENJ coins on JumpNet, they can:

It’s a great workaround for the current state of the Ethereum high fees, as users need to pay transaction costs only once. Moreover, JumpNet is carbon-negative, which solves a major concern about NFTs consuming too much electricity. Worth noting that there are some limits to how many transactions a single user can make on JumpNet.

At the moment, JumpNet only supports ERC-721 tokens, with an ERC-1155 upgrade already underway for the end of August 2021. 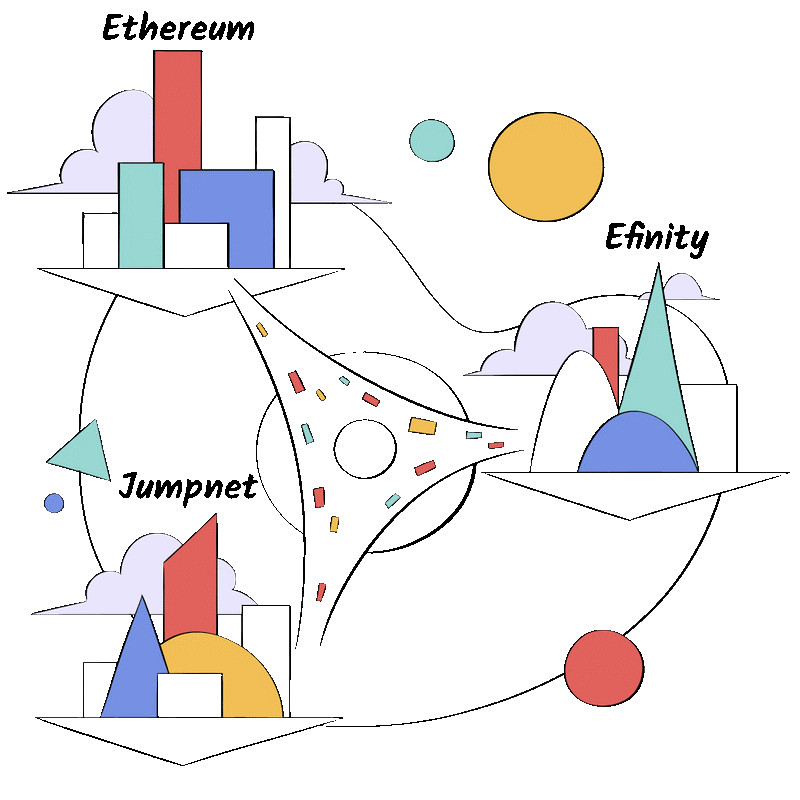 Efinity is a sidechain created on Polkadot, that will be integrated into the Enjin ecosystem as a cross-chain solution for scaling NFTs. The team created Efinity to complement Enjin, rather than replace it. As such, it gives ENJ holders the possibility to stake their tokens on the blockchain and earn rewards for doing so.

Moreover, holding EFI tokens will allow users to increase the limits of the number of transactions they can do on JumpNet.

The development team is working on an updated wallet that will bring a new interface and additional functionalities for ENJ and EFI holders. The wallet will conserve its current swiss-army knife aspect. More importantly, it will provide a more streamlined method of handling NFTs across Enjin, JumpNet, and Efinity as well as staking ENJ on Efinity.

In a nutshell, the wallet will work as a bridge between the three major pieces of the Enjin ecosystem puzzle. 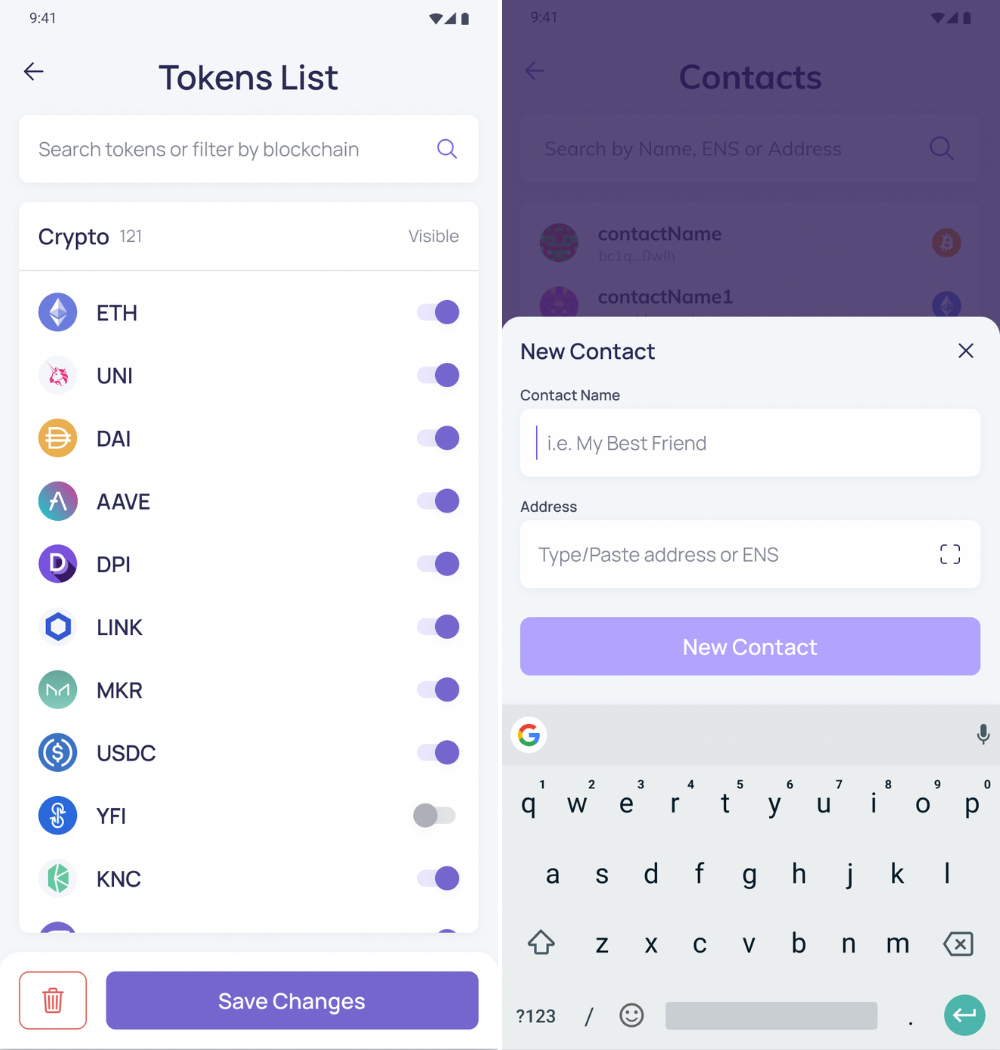 Before we go further, it will be interesting to have a look at the historical price action of ENJ. Because markets usually repeat some patterns, this can give us some additional insight into our Enjin Coin price prediction. 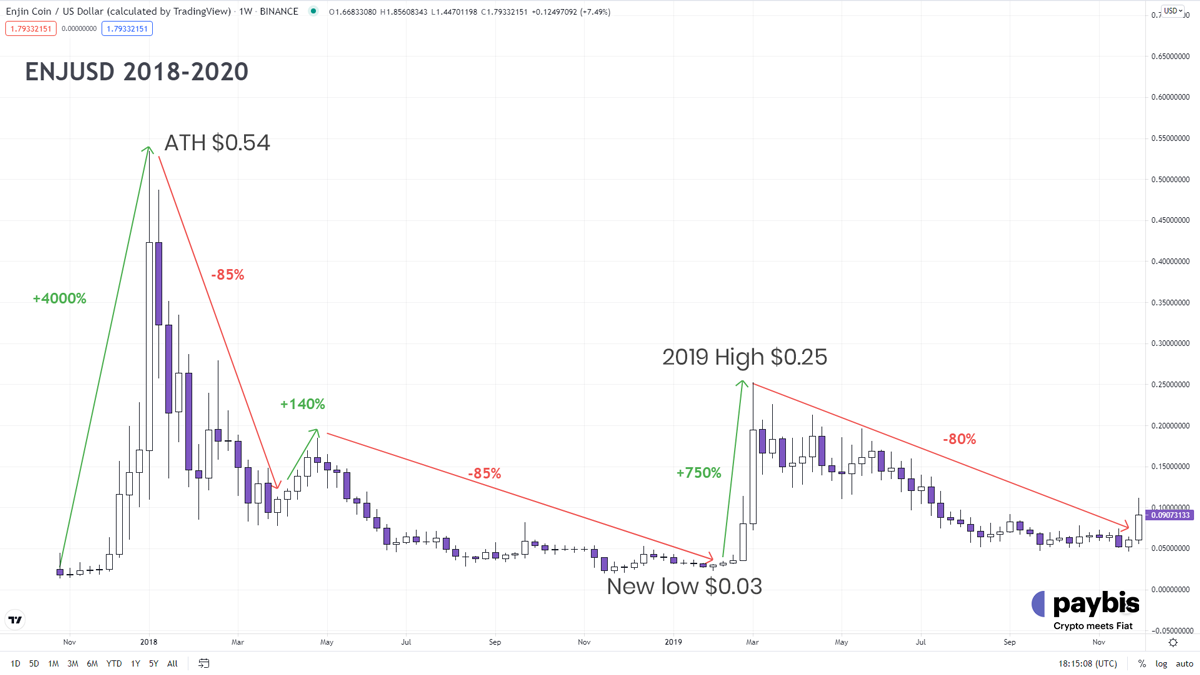 Like many other cryptocurrencies during the 2018 ICO boom, Enjin’s price skyrocketed by 4000% shortly after it was introduced in the markets. However, the bear market that followed shed off 85% of the ENJ token value. After a short recovery, another 85% was lost, totaling at -95% since its all-time high of $0.54.

The price reached new lows of $0.03 before ENJ experienced another explosive 750% rally at the beginning of 2019. The euphoria didn’t last long and the value declined shortly thereafter, dropping 80% by the end of 2019. 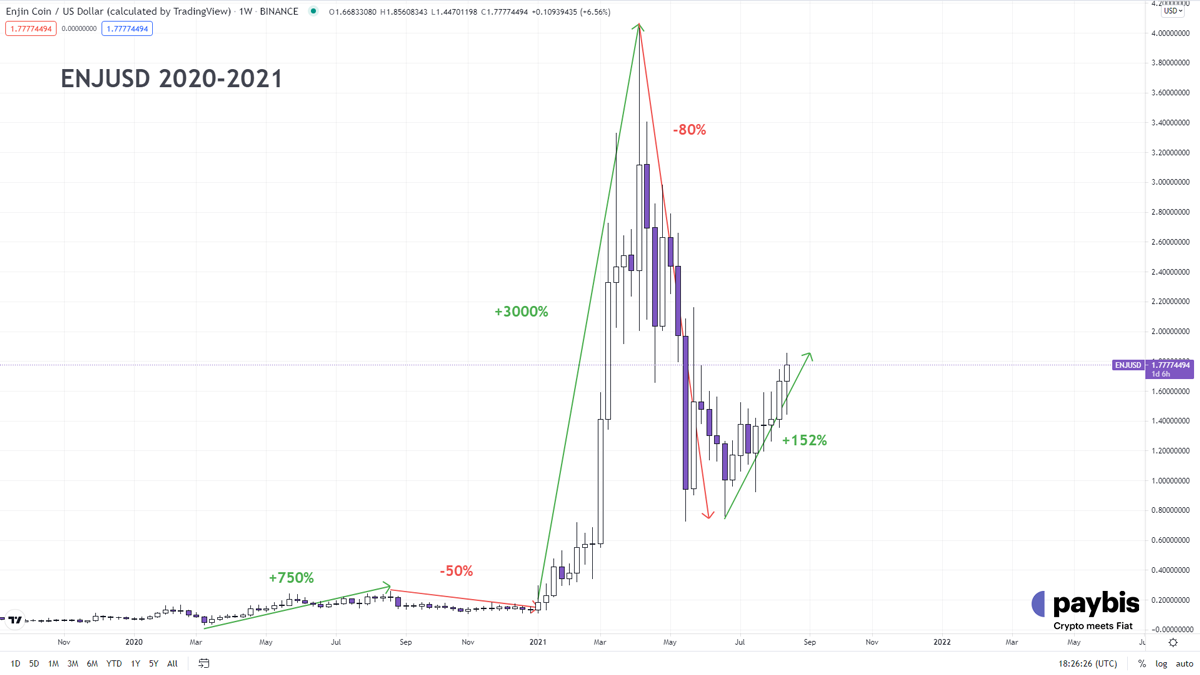 Enjin performed remarkably post-COVID19 crash, reaching 750% gains by the end of the summer of 2020. However, this was nothing compared to the extreme 3000% rally that started at the beginning of 2021 and lasted until May. The candles reached $4, a new all-time high for the gaming token.

The subsequent crash brought prices down by 80%, and ENJ was worth less than $0.7 at the beginning of summer 2021. Following the rest of the market, prices have entered a stark recovery and ENJ has gained more than 150% up until now. 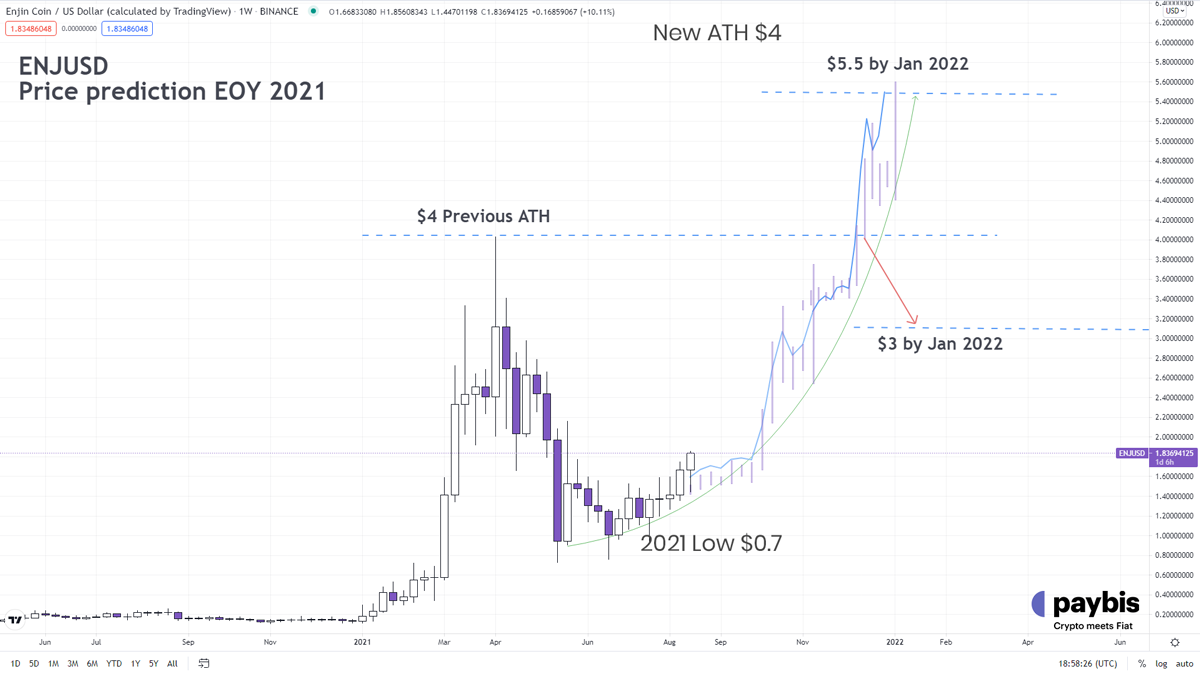 If you are wondering how to apply this Enjin Coin price prediction yourself, check out our article on trading altcoins in bullish situations.

Considering historical price action, the price of Enjin could decline by as much as 85% during the next bear market. While we can’t exactly predict when this will happen, we can assume that the price of ENJ could peak at $10 before this event. 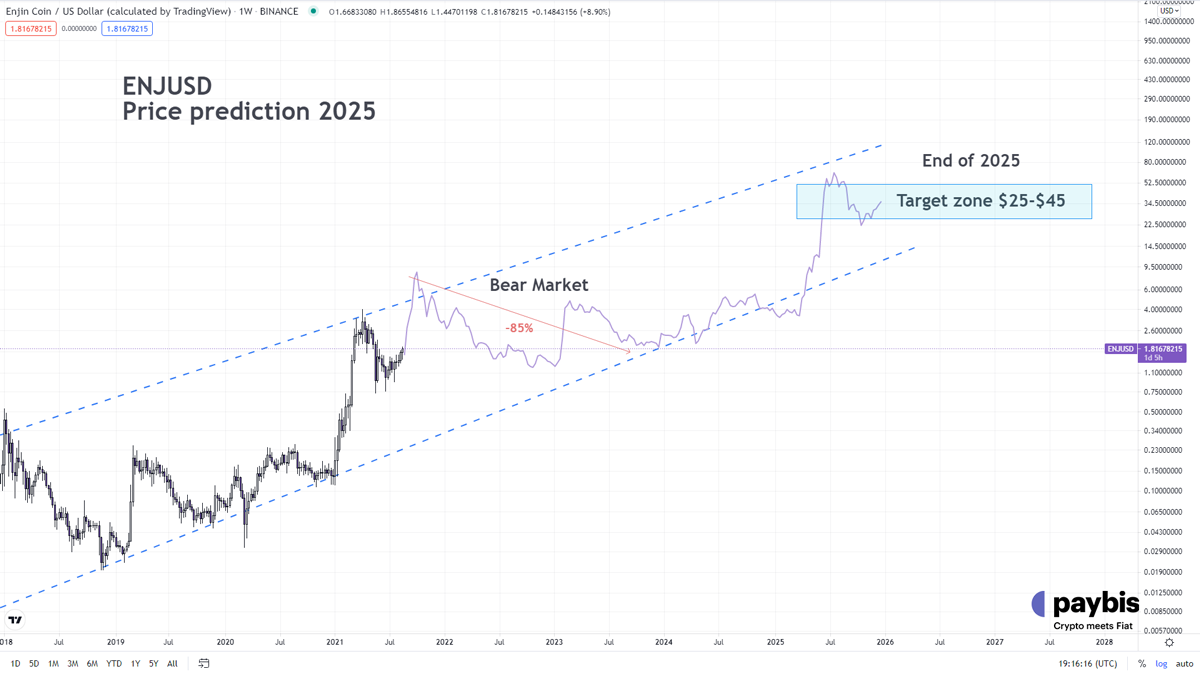 Consequently, prices should return to $1.5-$2 levels during 2023-2024, until the next bullish market cycle. If the team keeps pushing out regular updates, the ecosystem could become the go-to platform for blockchain gaming. Consequently, ENJ price could reach as high as $50 in the best-case scenario (+1150% since the current ATH).

Making an accurate Enjin Coin price prediction 2030, almost a decade in the future, is speculative at best. Faster and better gaming blockchain ecosystems might have overtaken Enjin by then, or the technology might have become obsolete altogether.

However, we can still imagine a scenario where Enjin prevails in this extremely competitive industry. By 2030, gaming has migrated entirely on blockchain technology and almost all items are handled as NFT and shared in a metaverse.

Enjin could become the main cryptocurrency used by gamers and prices could reach as high as $100 per single ENJ token.

It’s always interesting to compare our Enjin Coin price prediction with those from other experts. Exploring additional analyses is essential for forming an informed opinion on future price action.

In this article, we attempted to give you a thorough fundamental and technical analysis of the Enjin cryptocurrency and its ecosystem for gaming. This allowed us to provide you the following Enjin Coin price predictions:

As the Enjin team solves the scaling issues of the Ethereum network, we could see ENJ tokens massively appearing in games. As the adoption of the technology rises, so should the awareness of the platform and the value of ENJ itself.