Scalability has been a hot topic in the blockchain industry for as far as we can remember. Many popular networks failed to solve the blockchain trilemma, in becoming scalable, decentralized, and secure at the same time. Тhe rise of the DeFi ecosystem further emphasized this issue, as Ethereum’s network become more congested and gas fees went through the roof.

In this post, we take an in-depth look at Fantom, one of the cryptocurrencies that, at least on paper, ticks all the right boxes in this regard. We will attempt to give you a Fantom price prediction by analyzing its fundamentals and the technology that drives this high-speed blockchain.

Moreover, we will take into consideration the hype that this smart contract platform created in the past few months, and pair this with some sound technical analysis. This should provide us with a good framework for a Fantom price prediction for the short, mid, and long term. So, can the FTM cryptocurrency remain on the hype train that it has been riding on?

Read on to find out.

What is Fantom (FTM)?

Fantom is an open-source blockchain project with a goal to cater to smart contract developers by providing them with a highly scalable platform. It was specifically designed to overcome the drawbacks of predecessors like Ethereum. To this end, it uses a proof of stake consensus to provide cheap and fast transactions, while remaining highly secure.

A team of South-Korean computer scientists, with Dr. Ahn Byung lk at its helm, founded Fantom in 2018. The team is filled with experts in the blockchain field, all of them working from different parts of the world, emphasizing the idea of decentralization of the platform.

The FTM cryptocurrency that powers the Fantom blockchain has multiple use cases within its ecosystem:

The maximum supply of the token is capped at 3.175 billion FTM tokens, of which 2.55 are already in circulation. This is in contrast with other proof of stake blockchains like Tezos, Binance Smart Chain, or the next iteration of Ethereum, which don’t have a limited supply.

The staking algorithm continuously distributes the remaining FTM tokens across the network at a fixed rate of 16.48 FTM per second. It’s worth noting that there are three different iterations of the FTM tokens; ERC-20 tokens, BEP-2, and those on its proprietary network. Users can swap seamlessly between networks using the cross-chain multichain.xyz swap service.

How does Fantom work?

What makes Fantom inherently different from other blockchain networks is that it functions on the directed acyclic graphs (DAG) principle. In this blockchain structure, there aren’t any blocks in the traditional blockchain form. Instead, transactions are recorded on top of one another.

To be considered valid, they reference every other transaction that previously occurred on the network. While this is similar to how transaction blocks are interconnected in traditional blockchains, transaction speeds are much higher, as they don’t depend on block creation. 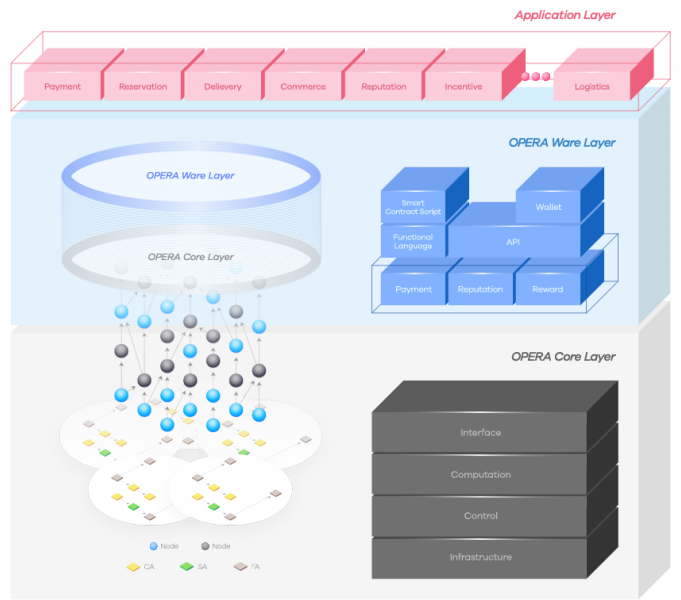 To make all of this possible, Fantom relies on an asynchronous Byzantine Fault Tolerance (aBFT) consensus algorithm named Lachesis. To continue this Fantom price prediction, let’s have a closer look at how this works.

Lachesis is the proprietary consensus mechanism of the Fantom network. It functions on an aBFT concept, which has the following characteristics:

In a nutshell, nodes in this consensus mechanism do not need to consult with others to validate the transactions. The immediate finality also provides developers with near-instant computation. As a result, an increased number of transactions doesn’t impact the overall speed of the network. 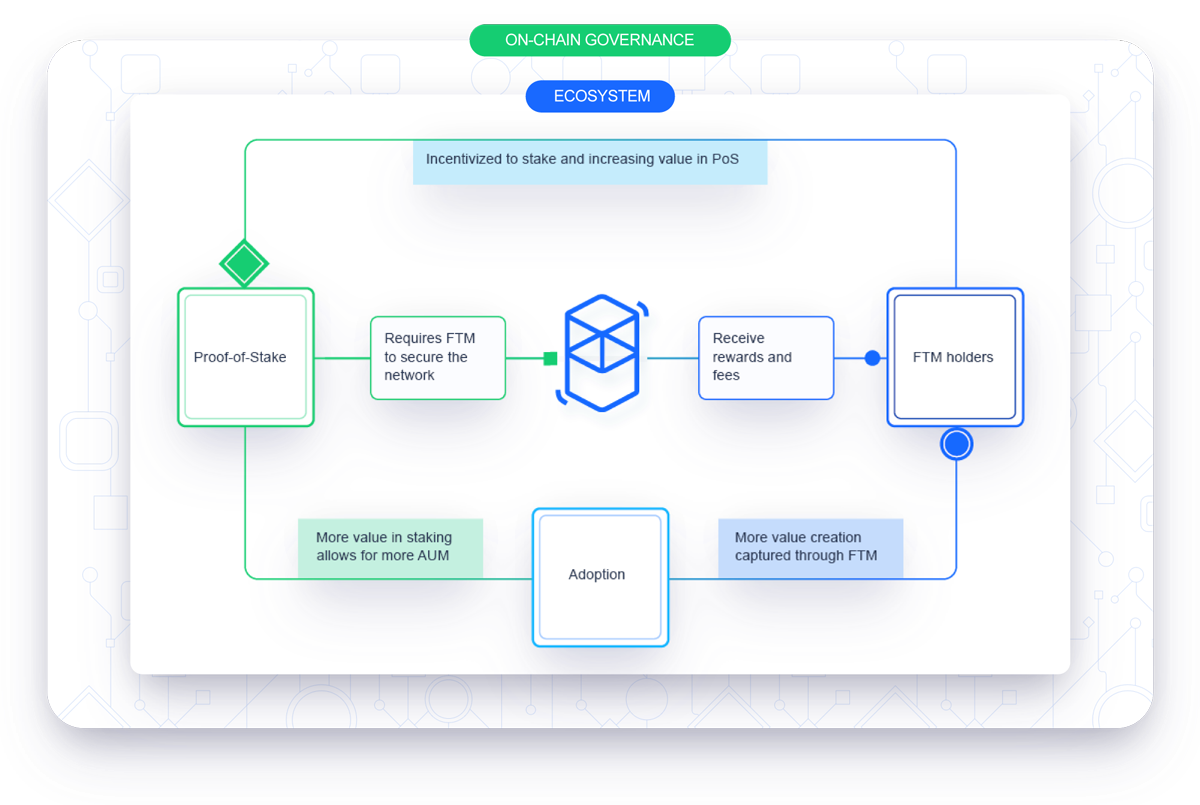 Unlike in other proof-of-stake consensus mechanisms, Lachesis validators do not decide which blocks are valid. Each node runs a local DAG, which allows Fantom to calculate the outcome of the blockchain independently on each node. This “leaderless” mechanism further improves decentralization, and therefore, the security of the Fantom Network.

While theoretically, anyone can become a validator on Lachesis, the requirements are pretty steep. Validators need to stake at least 1 million FTM at all times to secure the network. Considering the current price of around $2 per FTM, this is a huge investment. However, FTM holders can stake with as low as 1 FTM by delegating their tokens to already active validators.

What is Fantom Opera?

Fantom Opera is the Layer 1 open-source environment that the team created in order to provide a modular platform for smart contract developers. The Opera mainnet uses the Ethereum Virtual Machine (EVM). As such, it can be bridged with the #1 smart contract platform on the planet. This compatibility allows developers to port their dApps into Opera very quickly and start benefiting from its scalable architecture right away.

What’s more, is that the Fantom network is modular in the sense that every blockchain that runs on Opera is independent of one another.

Similar to Polkadot, it serves as a basis for a network of blockchains that can easily communicate and interconnect with each other. And because they never interfere with each other’s computational tasks, it allows for infinite scalability of the network.

Overview of the Fantom Ecosystem

To continue our Fantom price prediction, let’s explore the possibilities that the aforementioned Opera framework offers to developers. Currently, there are more than 80 functional dApps deployed on Fantom Opera, extending across half a dozen of different sectors. Currently, these include: 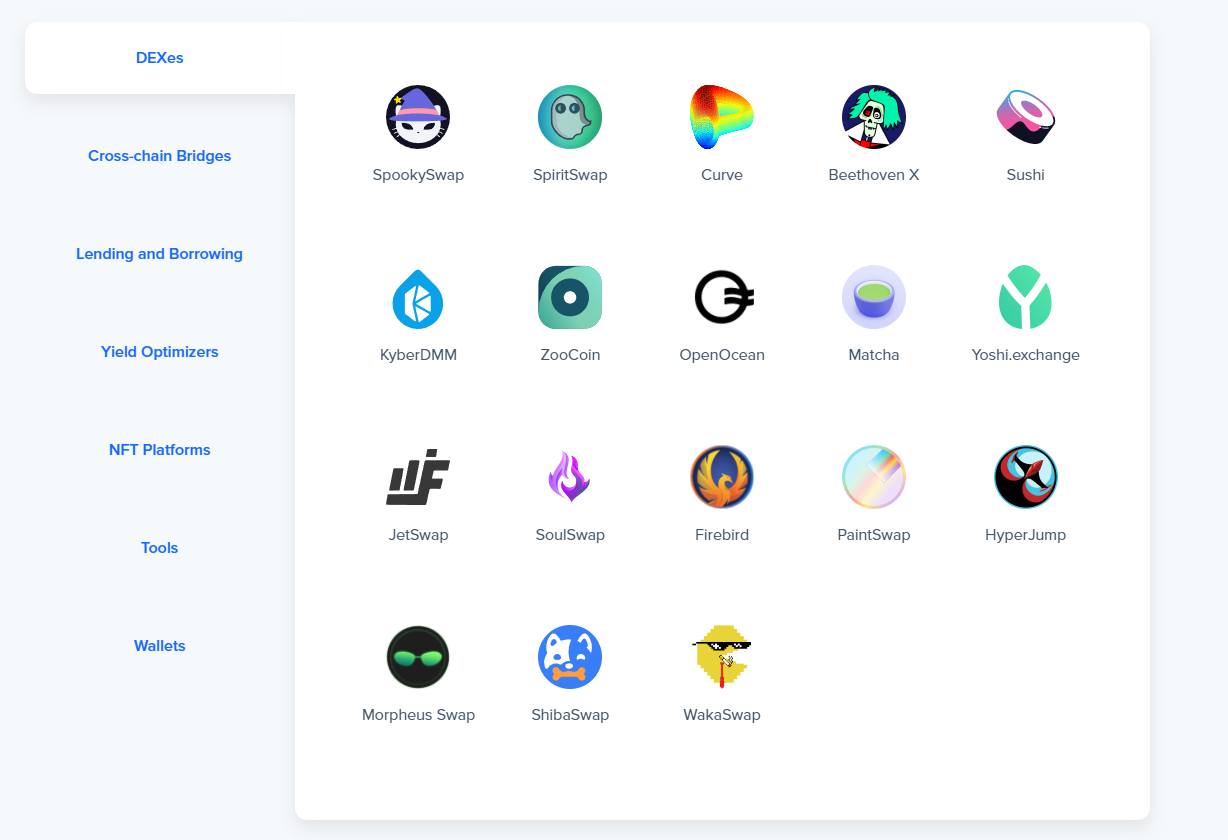 All in all, Fantom is a growing blockchain that has attracted a good amount of DeFi platforms to its scalable ecosystem. That said, some recent events have contributed to an exponential rise in the price and popularity of the FTM cryptocurrency.

The FTM token followed the general bullish trend until the end of the summer of 2021 when it suddenly exploded in popularity. To continue our Fantom price prediction, we should analyze the reasons that caused investors to jump on the hype regarding this cryptocurrency.

The first major catalyst to Fantom’s increase in value was the announcement of a new incentive program for developers on Fantom Opera. The team behind Fantom upped the antes by increasing the rewards for staking FTM, for developers in particular.

These rewards could be used by protocol builders to reduce their running costs or provide yield farming incentives to their users. The announcement came on August 30 2021, and was followed by a strong 300% rally in the following weeks. Users flocked to Fantom-based protocols for increased earning opportunities and the price of the FTM tokens followed.

If you’re a protocol team, we’ll reward you for sustaining and increasing your TVL on Fantom.

As the excitement about the new incentives was winding down, another crucial event hit the news in September 2021. Andre Cronje, known for his involvement with Yearn.Finance launched Artion, an open-source NFT marketplace on Fantom Opera.

The timing was perfect, as OpenSea, the largest NFT marketplace on Ethereum was encountering some serious issues. In addition to the high mining fees and transaction costs, allegations of insider trading on the marketplace were shaking its foundations.

On September 16th, Cronje came out with Artion, boasting open source code, and zero fees for purchasing and minting NFTs on Fantom. This was in contrast to OpenSea, as the NFT exchange is known for its opaque protocol and 2.5% flat fees for purchases. Some members of the community even considered Artion to be a case of a direct copy of OpenSea. The interface is very similar, to the extent that only an accustomed user could tell the difference between the two. 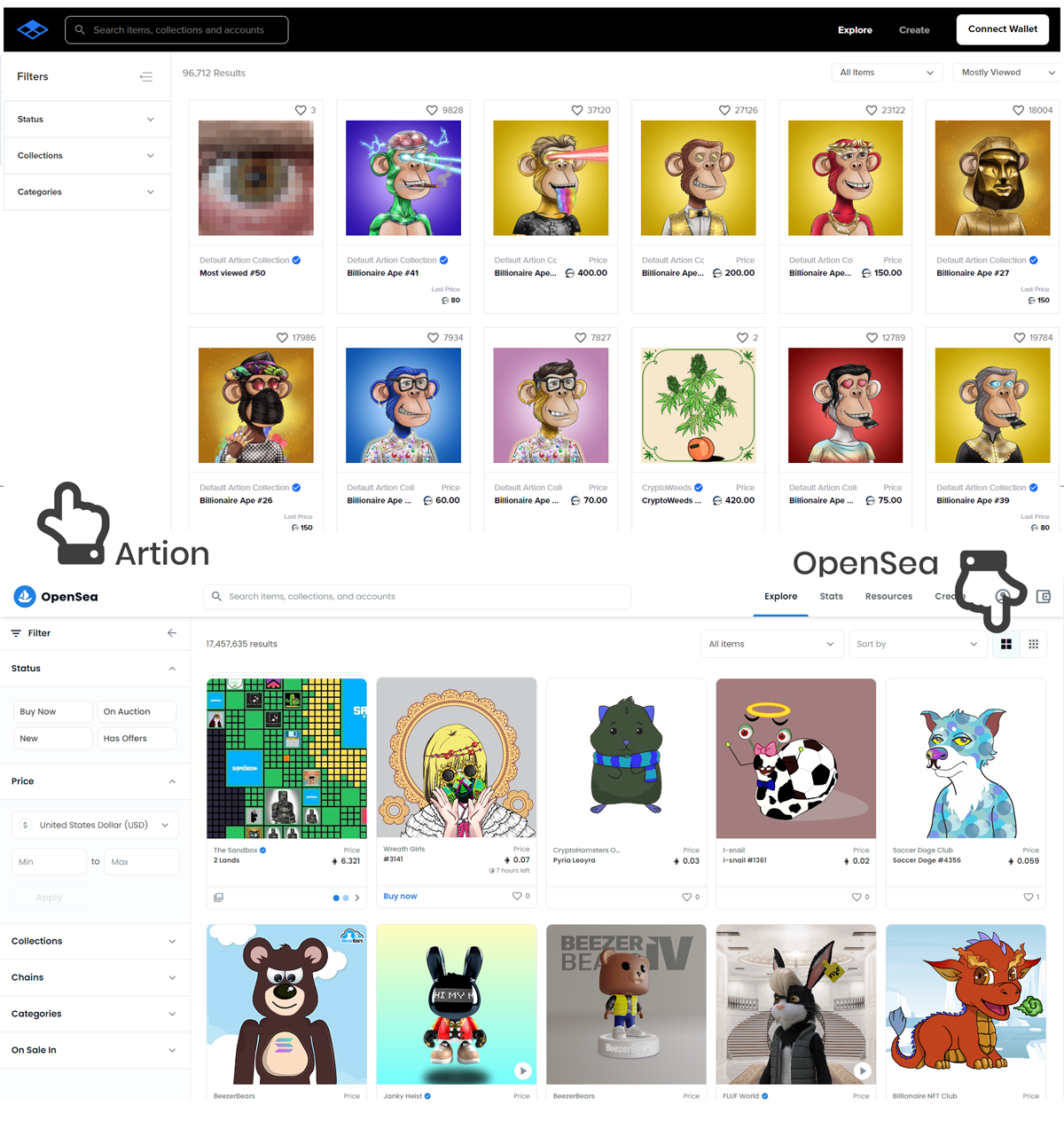 Andre Cronje additionally announced that he was working on on a cross-chain NFT marketplace using Fantom bridges, which hyped up the project even further. He invited developers to fork his project, to further contrast it from the isolated environment of other NFT marketplaces.

Shortly after the Artion announcement and its release, The Fantom Foundation announced another important development of their platform. They had partnered with one of the oldest financial institutions in Tajikistan. The goal was to provide a framework for creating a central bank digital currency (CBDC) for the Central-Asian country.

While the news piece was not as hype-worthy as others in this list, it still managed to add fuel to the FTM FOMO and gave it additional bullish momentum.

To be able to give you an honest Fantom price prediction, we need to have a detailed look at its historical price performance.

Shortly after its release, FTM was hit hard by the bear market of 2018-2019. That said, it performed admirably during the 2019 summer recovery. It registered a staggering 800% increase and made it to the list of top 10 best-performing coins at the time.

The subsequent bear market was harder on Fantom than on other coins, and the FTM token lost almost 92% of its value. The low point was registered during the COVID19 crash in 2020 when a single token was worth only $0.0015.

However, from there, Fantom went quickly upwards and made 1500% gains during the DeFi summer of 2020. However, it was in 2021 that the exponential growth really took off. 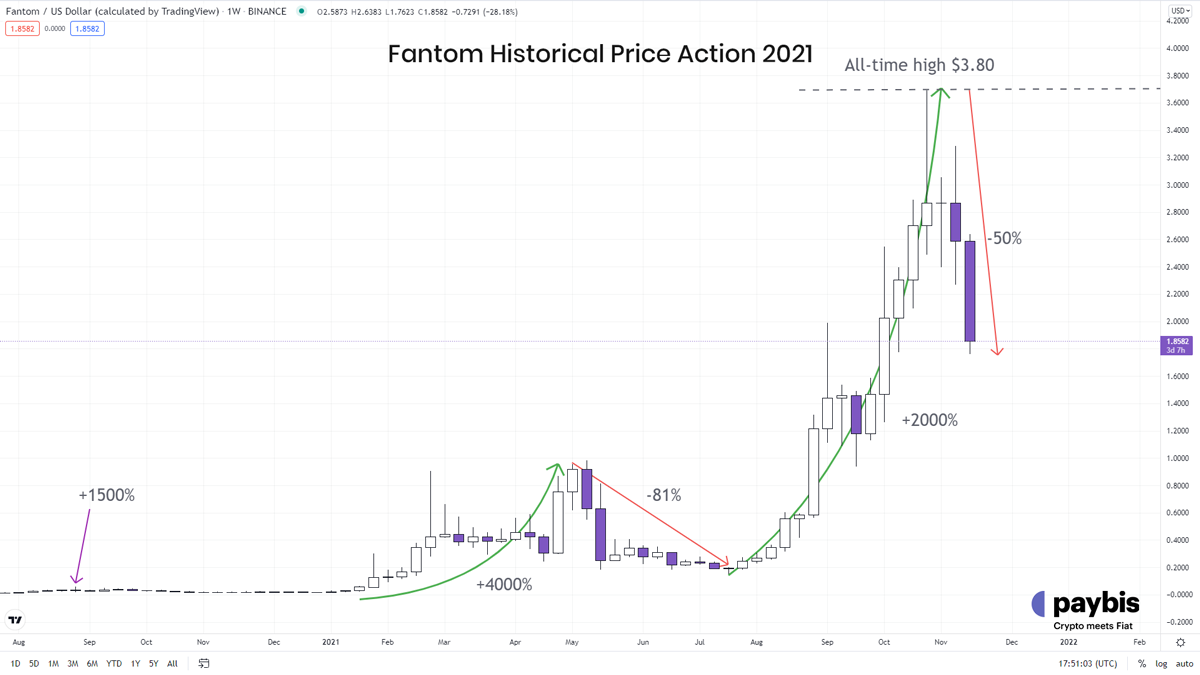 The 1500% increase in 2020 all but disappears on the chart when compared to the incredible growth of FTM in 2021. First, the coin reached a peak in May 2021, together with the rest of the market.

After falling more than 81%, from May to August 2021, the FTM coin entered the rally that put it on everyone’s radar this year. FTM easily outperformed the rest of the market with 2000% gains in September and October. In this regard, it rivaled some of the craziest meme coins. That said, it has once again retraced by 50% from its all-time high of $3.80, at the time of writing.

All in all, we couldn’t help but notice a pattern forming in the FTM price action. FTM tokens are often subject to huge rallies, followed by stark price declines, making them great for swing trading.

Next in our FTM price prediction, let’s try to assess how high (or low) could the token go by the end of 2021. 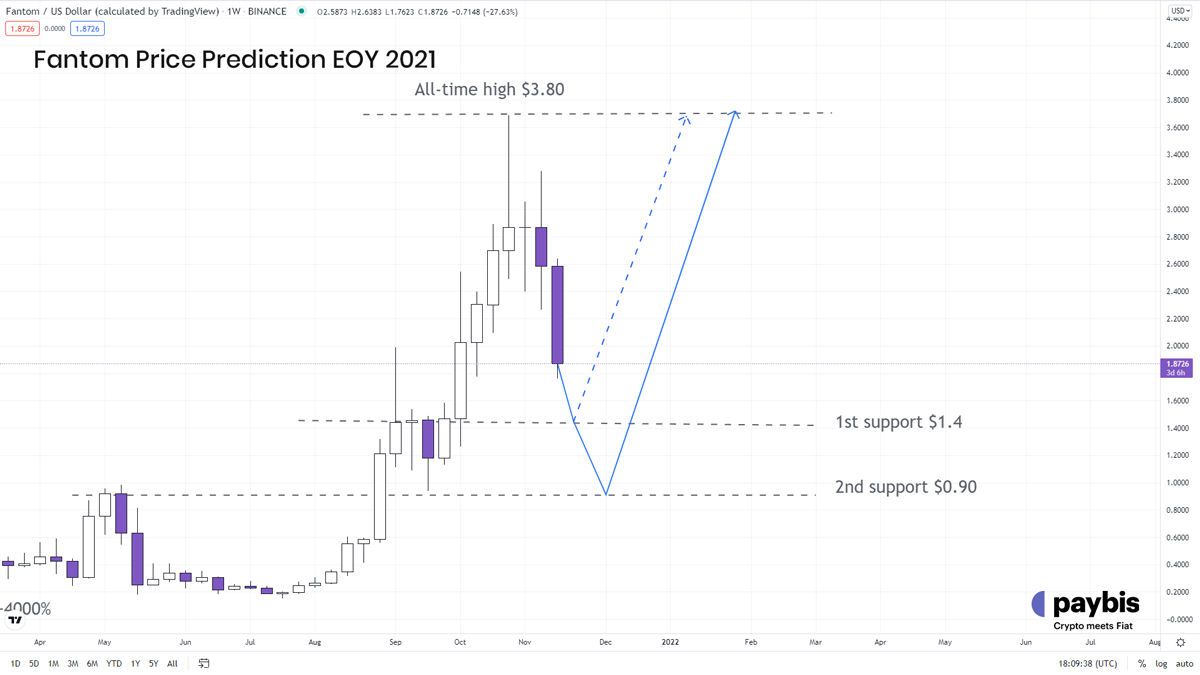 Considering the current retracement in the crypto markets, the price of FTM could continue to pull back in the immediate future. It could find support at either the $1.4 or $0.90 price levels and rebound towards its ATH from there.

With previous price actions and growth potential in mind, we can expect it to reach its ATH by the end of 2021. 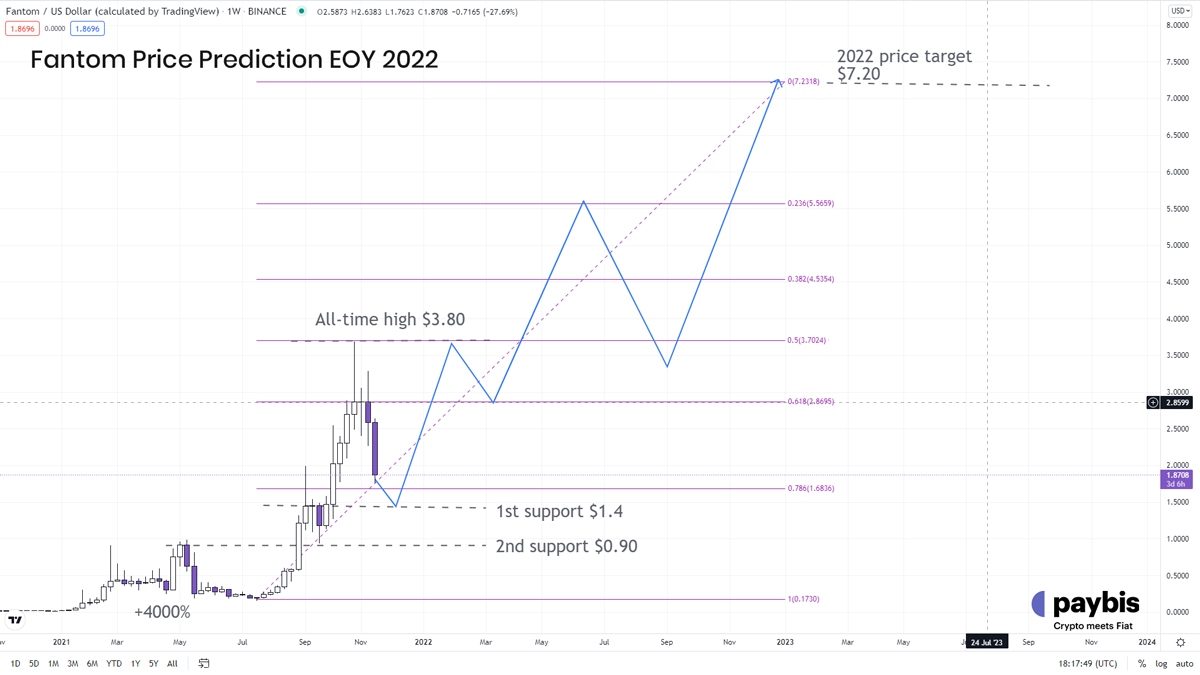 For our Fantom price prediction for 2022, we can assume that the bull market will continue to run its course until the end of the year. Consequently, we can rely on historical price patterns for FTM that have closely followed Fibonacci retracement levels.

Respecting the pattern of strong rallies followed by price dips, we can expect the price to reach between $7 and $10 by the end of 2022.

Providing a precise Fantom price prediction for 2025 can be a challenging task. The price spikes and subsequent dips make Fantom incredibly unpredictable. This is especially true for longer time frames.

That said, we can expect the price to retrace significantly from our $10 Fantom price prediction for 2022. Moreover, as history repeats itself, we can expect another bear market during 2023 and 2024. Consequently, prices could return as low as $3 during this period.

If the next Bitcoin halving in 2024 manages to spur another bull market, then we can expect FTM tokens to reach new heights in 2025. A conservative Fantom price prediction would put it around $20, considering the current trending price.

In this article, we provided you with a thorough fundamental analysis of the Fantom blockchain and its FTM native token. We paired these findings with sound technical analysis which allowed us to provide you with the following Fantom price prediction:

The numerous advantages the Fantom Opera framework provides should bring in more developers to the platform over the years. This increased adoption could result in Fantom becoming a major player in DeFi and rival competitors like Cardano, Binance Smart Chain,  and even Ethereum.