The long-awaited altseason is finally upon us, with some coins performing better than others. Blue-chip DeFi tokens seem to be making casual 10x on a regular basis, while others are still lagging behind in terms of performance.

In times like these, looking into a coin’s fundamentals can help you find the real winners. And that’s exactly why we wrote this article. Tezos, one of the most popular staking coins in the market, has not yet followed the upwards market momentum, even though its fundamentals are stronger than ever.

With lots of excitement ahead of us, we decided to research and write up our very own Tezos price prediction. The contents of this article should provide sufficient guidance on the potential of XTZ, a quick review of its history, and its performance in the future.

Introduction to the XTZ token

The Tezos blockchain was first announced through a whitepaper that was published in 2014.

After several years of development, the project was launched in 2017, through one of the most successful ICOs in history. It gathered a record-breaking 66.000 BTC and 361.000 ETH, which, considering today’s prices, would be worth over $4.5 billion.

However, a legal battle between Tezos’ creators Arthur and Kathleen Breitman and the appointed head of the Tezos Foundation, Johann Gevers ensued. This delayed the distribution of the XTZ tokens and the mainnet launch until late 2018. It also had a negative effect on the community-building efforts of the project.

The Tezos blockchain enables the use of smart contracts and the deployment of decentralized applications. As such, many consider it to be a direct competitor to Ethereum.

With that said, Tezos was the first blockchain that managed to bring the Proof-of-Stake consensus algorithm into the mainstream, way back in 2018.

To be more specific, Tezos utilizes a liquid proof-of-stake (LPoS) consensus to validate transactions on its network. In this system, users stake their XTZ tokens through “bakers” that participate in the governance of the system. When bakers validate new blocks, they reward the users that voted for them, providing a steady source of passive income.

The following video explains how to stake Tezos and gain 5.5% ROI.

Thanks to this consensus method, Tezos has a considerable advantage over other public blockchains. The process of coordinating and executing software upgrades is much easier than on Ethereum, for instance. 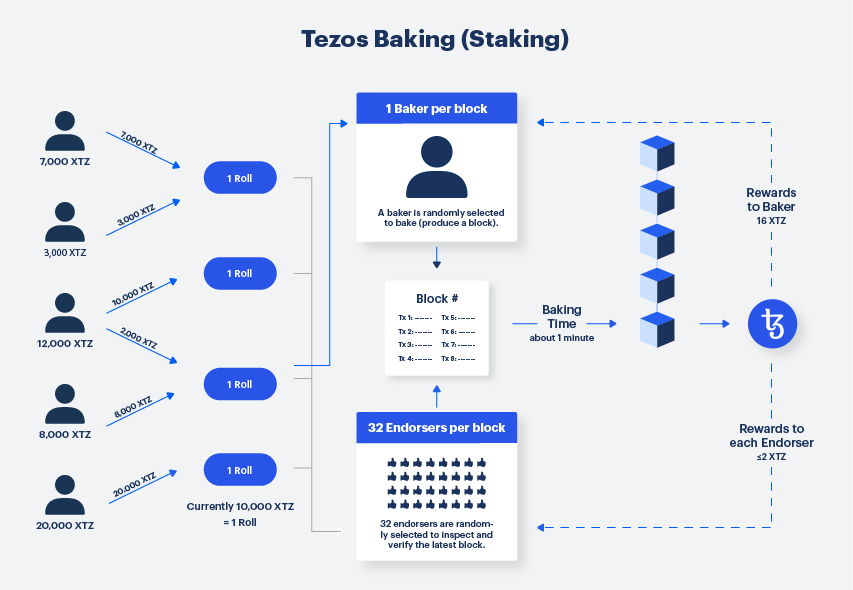 Today, the Tezos blockchain hosts over a hundred different projects. These include decentralized finance products, payment networks, and even CBDC partnerships with financial institutions like Societe Generale.

Additionally, unlike Cardano, another extremely popular staking cryptocurrency, Tezos has a fully operational mainnet, ready to deploy dApps. As such, if Cardano and Ethereum fail to meet expectations with their PoS blockchains, many investors and developers might be tempted to adopt Tezos’ proven concept.

Tezos managed to perform quite honorably this year by registering 150% gains. However,  smart contract competitors Cardano (ADA) and Binance Smart Chain (BSC) have both gained more than 600% in value since January 2021. This leads us to believe that XTZ has a lot of room to grow during the bull run of 2021.

Overall, there are several developments and future updates that lead to a positive Tezos price forecast. Below, we selected the ones that might have a considerable impact on Tezos long-term price predictions:

All in all, it looks like Tezos is setting itself up for success by providing continuous updates and keeping up with the current trends of NFTs and DeFi.

Before we delve deeper into our Tezos price prediction, let’s have a quick look at what happened to Tezos’ price since it was released in the markets in late 2018. 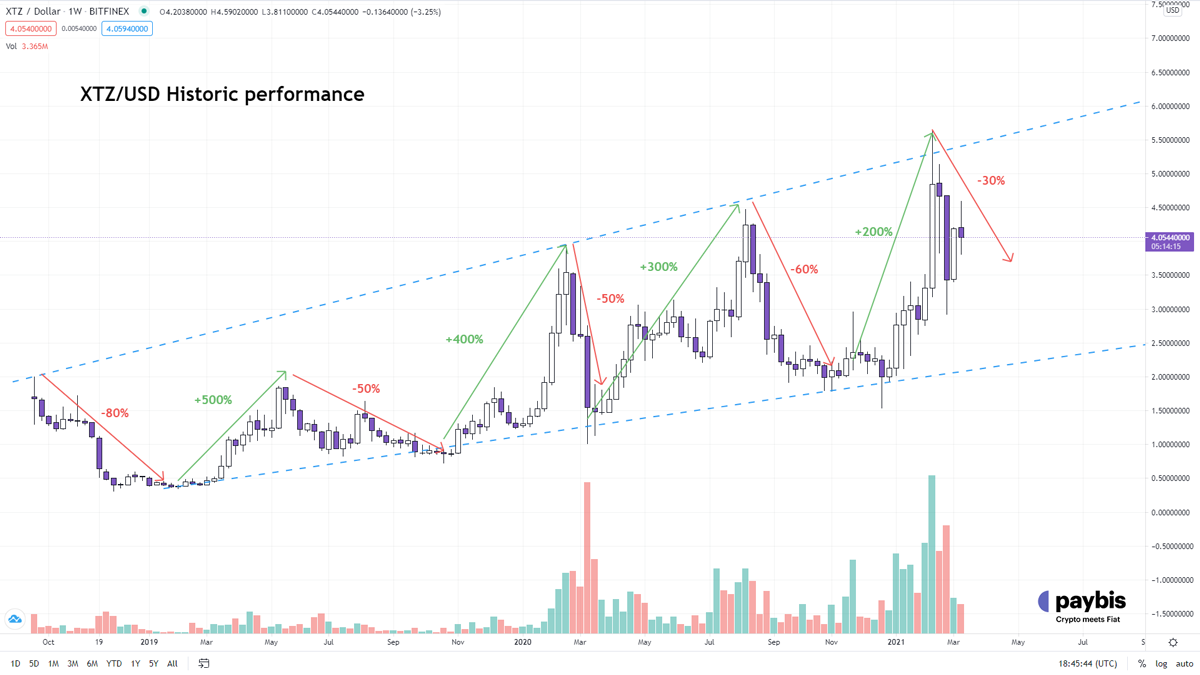 Following market uncertainty caused by the bear market and the ongoing founder’s lawsuit during its release, the XTZ price dropped by 80% in the first year of its existence.

However, thanks to strong fundamentals, Tezos managed to perform astonishingly well during the short market recovery of 2019. With more than 500% gains, it was considered one of the top performers of the year, together with Chainlink and Binance Coin.

In the past couple of years, Tezos’ price has started to pursue a predictable cycle of considerable rallies (between 300 and 500%), followed by a sharp value drop of around 50%.

With that said, we can observe a long-term bullish pattern forming, with continuous higher-highs and higher-lows. The price of the XTZ token has slowly gained considerable value from its all-time-lows of $0.36, reaching an ATH of $5.60 at the time of writing. This equates to a price increase of 1500% over two years.

Thanks to this general bullish momentum, we can provide our positive Tezos price prediction in the following chapters.

For the time being, the markets are experiencing upwards momentum paralleled only by the 2017 ICO craze. However, this bull run is quite different, due to the increased interest of institutional investors in the crypto markets.

With Bitcoin leading the way, altcoins are beginning to pick up considerable momentum to the upside. Two of the most coveted types of coins since the beginning of the year are DeFi and NFT blockchain tokens.

And as we previously mentioned in our fundamental analysis, Tezos fits perfectly in this narrative. It provides a scalable and future-proof solution for both DeFi products and NFTs.

As such, we feel quite bullish about our Tezos price prediction for 2021. We expect the token to break up the current all-time high of $5.6 and continue its path towards the $10 levels. 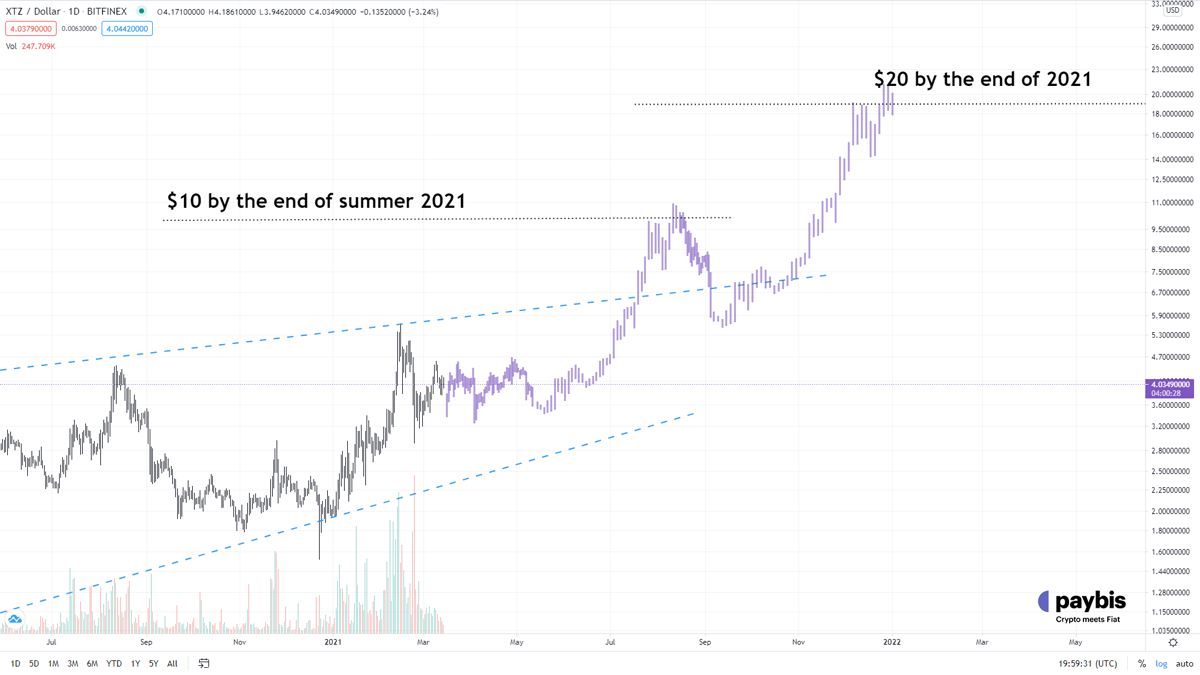 To support this we can compare Tezos’ performance with direct competitor Cardano. ADA has made 1000% gains in 2021 alone. If XTZ were to follow suit, our Tezos price prediction allows us to give a price of $20 per XTZ token by the end of 2021.

In the years that follow 2021, we should see a bearish cycle return in the crypto markets. However, by 2025, a new Bitcoin halving would have already taken place, which historically signifies a bullish reversal.

If history can teach us something, is that Tezos can keep up in bearish markets, even increasing its market cap while others lose out.

Our Tezos price prediction for 2025 follows the reasoning of increased adoption of the network in DeFi projects, together with the predicted growth of this industry. In the following years, we are bound to see DeFi gain mainstream adoption, and all blockchains involved in the industry should follow suit. 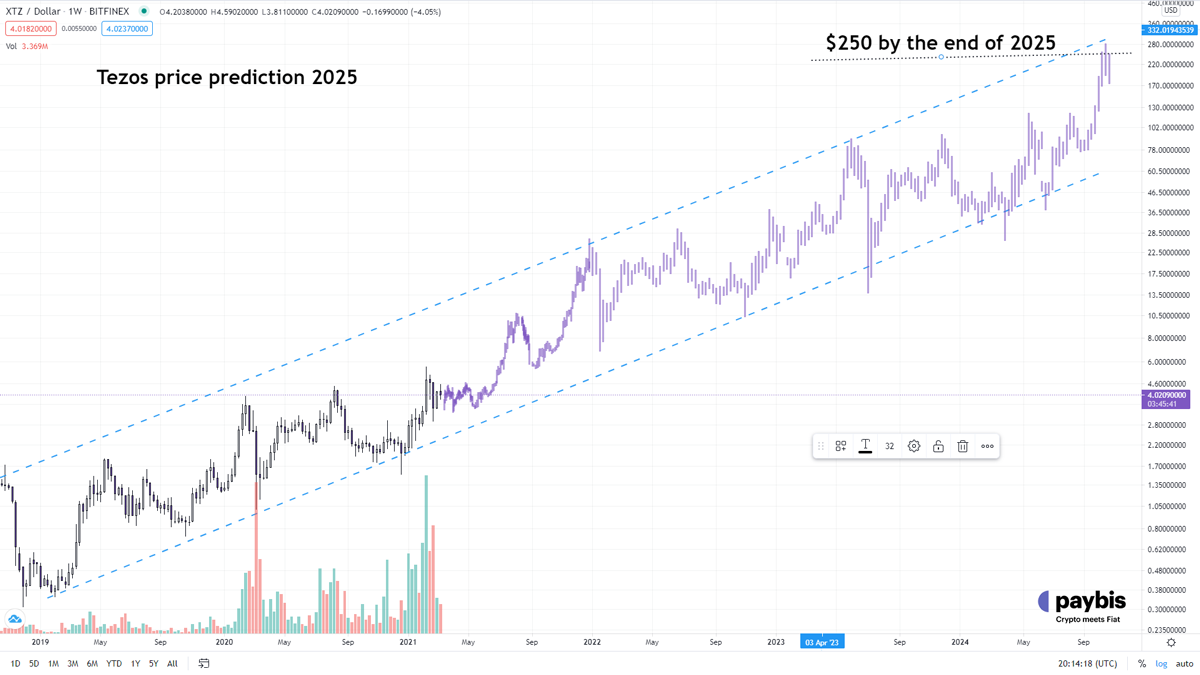 Furthermore, if the price follows its cyclical pattern of higher highs, we can expect it to reach as high as $250. To be more conservative, XTZ could be worth anywhere between $150 and $250 by the end of 2025.

However, if Ethereum manages to finally deliver on its scalability promises, it could bring some serious competition to Tezos. As a result, the popularity of the blockchain might fail to increase, keeping the value of its tokens under the $50 mark.

Even for experienced analysts, looking forward 10 years into the future of cryptocurrencies is a very difficult task. The cryptocurrency market is quite unpredictable and the future of blockchain such as Tezos depends on dozens of factors, including adoption, technology upgrades, and regulations.

The cryptocurrency market has grown considerably in the past decade, reaching over $1.5 trillion at the moment of writing. We can hope that this trend continues and future-proof blockchains such as Tezos will have won their place at the top 10 by market cap by then.

For our Tezos price prediction for 2030, we can factor in the future circulating supply of the token. Due to continuous minting, there should be just over 1 billion XTZ tokens in circulation by that time.

If the price of XTZ hits $300 by then, it would put the blockchain’s market cap just above $300 billion. We even think that this Tezos price prediction is quite conservative as this market cap would only be slightly larger than Ethereum’s market cap today.

Going this far in the future makes it impossible to make an accurate Tezos price prediction as anything becomes pure speculation.

First, with the destructive monetary policies applied by major world governments, economic instability should grow even further. As a result, the value of FIAT currencies will be diluted even more, and a Tezos price prediction for 2050 might be greatly influenced by inflation.

Additionally, staking blockchains like Tezos could become the norm for all financial transactions by then. As such, we can see XTZ tokens reaching as high as $500. This would mean that Tezos could be reaching a $500 billion market cap, surpassing current payment processors such as Visa or PayPal. 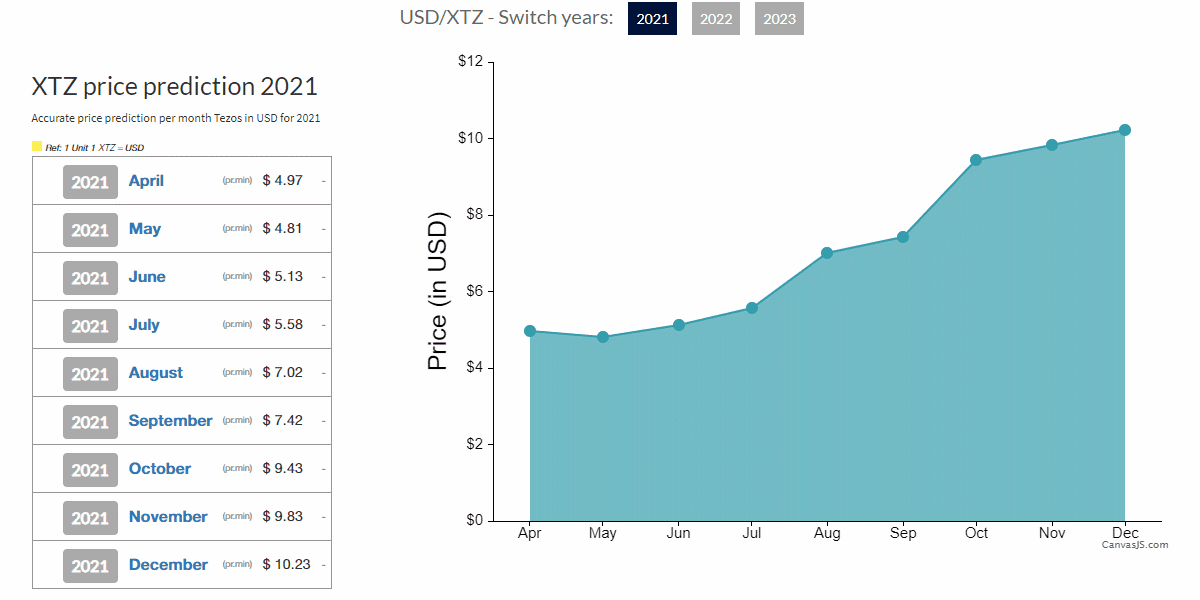 If you wish to conduct a Tezos price prediction yourself, we can point you towards some useful resources that will help you out in doing so.

Finally, you can use our own Tezos price tracker for a quick overview of the token’s performance in different timeframes and FIAT currencies.

Throughout this article, we went over the fundamental values of Tezos and combined them with sound technical analysis to bring you an honest Tezos price prediction.

To summarize, we came to the following conclusions:

While Tezos has been underperforming this bull run, we still remain quite bullish on the token. To justify our Tezos price prediction, we linked the coin’s future performance to DeFi and NFTs.

Didzis Veinbergs
Didzis Veinbergs has been writing about finance for more than 10 years, with experience in forex, crypto, and payments. You may find him rambling about things on Twitter, looking all professional on LinkedIn and hanging around on Facebook.