TRON has generated a large amount of hype over the past 3 years. From its founder’s infamous mentorship by Alibaba legend Jack Ma, to the project’s ambitious roadmap, it is certainly one of the gems to look out for.

Yet, in this uncertain economic period, it’s quite hard to make predictions for TRON’s coin (TRX) future value. Even though we are in the midst of what seems like a bull market, the dynamics of the market seem to be changing on a daily basis.

In this post, we take a look at TRON’s past performance since its inception, the opportunities and dangers ahead, and its future potential. Towards the end of this post, we will also offer our very own TRON price prediction. Let’s delve in!

A primer on TRON

Being at the forefront of blockchain development, Chinese projects seem to be performing well in positive market conditions. The same can be said for TRX. When it was first introduced to the market, it generated a huge amount of hype, driving its price upwards.

TRON was one of the first projects to solely focus on the development of a decentralized platform for content sharing and entertainment – shortly after STEEM. Even in the unfavorable market conditions of 2018, the project managed to acquire file sharing platform BitTorrent and make a significant investment in Poloniex exchange.

The same effort and consistency can be observed in its marketing and community building efforts. And there’s a good reason for that. By continuously introducing more functionalities to its blockchain, users can participate in governance decisions of the network (co-create) by staking their coins, and earn rewards along the way (passive income opportunities).

2020 has been a rather uncertain year for crypto. From the unexpected COVID-19 market drop, to the FUD of Chinese exchanges, TRON has been experiencing a large amount of volatility.

However, when looking at the latest 4-month period, we can confidently say that the coin is recovering from its recent lows.

TRX is still way behind some of the most popular altcoins. At the moment of this writing, it is ±90% below its ATH, sitting at $0,026 USD.

When looking at the daily chart, TRX is no longer following a local downtrend (break above the falling wedge), which could mean that we are poised to see some slow and stable gains within the last quarter of 2020.

What drives TRON up

TRX has been performing well against its relatively stable Bitcoin pair. The coin is now nearly 300% up from its March lows and seems to be headed for more. Among others, here’s why we are experiencing positive market conditions:

Part of the reason that drove the coin’s price up in relation to the overall performance of the market is DeFi’s increase in popularity. Seeing the high demand for yield farming on the Ethereum network, Justin Sun launched JustSwap, a decentralized exchange on Tron’s blockchain. He also introduced SUN coin, and the controversial Wrapped Bitcoin, which are both quickly rising in the top positions of CoinMarketCap

TRON’s attempt to benefit from the DeFi hype was successful since transactions are cheaper and faster that than of ETH.

#ETH will always be the king of DeFi, but other blockchain will start eating ETH market share over the years unless ETH fixes the gas problem soon

Tron gas fee is one penny per smart contract. https://t.co/sWKUaUJn65

Thanks to the continuous marketing efforts and the founder’s involvement and TRX’s growth and promotion, the project’s userbase has grown significantly. With over 10 million active wallet addresses, TRON now has one of the largest communities in the crypto market.

Within 2020, TRON formed strategic collaborations with many promising partners. Among them are:

In May 2020, Justin Sun announced the release of TRON 4.0, a network upgrade that will increase the privacy of TRX (through shielded transactions), improving the cryptocurrency’s interoperability and its ability to scale. You can read more about the features and benefits of this upgrade here.

TRON vs Ethereum: The never-ending battle

While China forms a big market for cryptocurrencies globally, the marketing methods they implement seem to have a lesser impact and often feel awkward to the western world. In some instances, it even seems shady in nature (e.g. when Tron made a strategic investment in Poloniex earlier this year).

In many ways, cultural barriers are more important than people think when it comes to the adoption and hype of a certain cryptocurrency. And we all know that the ability to generate hype is more important than a coin’s fundamentals in positive market conditions.

This is why Ethereum keeps a low-key approach. It’s founder, Vitalik Buterin does not tweet hype-related content and only focuses on technical conversations that advance its project forward. The explosive growth of Ethereum-based DeFi projects and NFTs speaks louder than shallow promotional efforts and future promises.

Overall, when observing the general sentiment of the market, we believe that Ethereum will outshine TRON in this bull market. If you want to learn more about Ethereum and its potential in the next two years, make sure you read this post.

What may go wrong with TRON price

Before making a TRX price prediction, we need to take into consideration all the possible challenges that will affect its price along the way.

Challenge #1 – Lack of trust from the community

Market sentiment is a very strong factor when it comes to a coin’s potential to increase in value. Unfortunately, we have previously seen Justin Tron call TRX a “shitcoin” live when briefly interviewed by crypto podcaster Peter McCormack.

When TRON was first launched in 2017, the crypto market was less crowded. As demand for cryptocurrencies is (once again) increasing, there is also more competition and market saturation. More coins with similar functionalities are being launched, most of which will attempt to “steal” part of TRX’s market cap. This will naturally affect the level of demand, which means that the userbase needs to keep growing to maintain the current price point.

According to historical data, we are quickly approaching a post-halving trend, which should take Bitcoin to new highs. If this occurs, and the price of altcoins decrease against Bitcoin, we can see many traders exit their positions and moving it into BTC. This would, in turn, decrease the value of altcoins, including TRX.

When looking at the price chart of TRX against USD since its inception, we can derive some helpful conclusions. These will help us make a more accurate TRON price prediction. 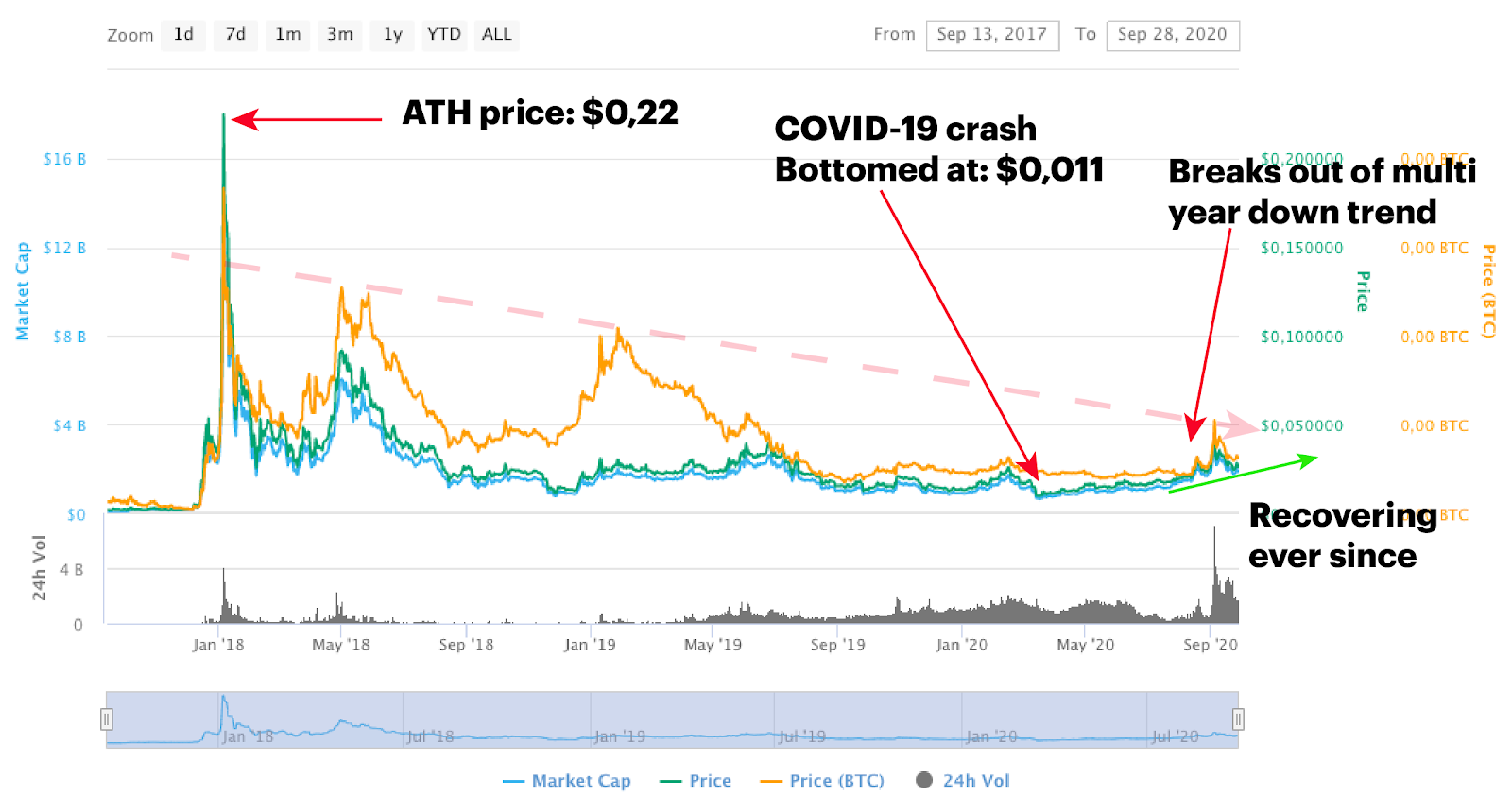 If we were to make a TRON price prediction for the end of this year, we would most likely expect a slow recovery to $0,05 – $0,06 area. While this number may seem somewhat conservative compared to other predictions, keep in mind that TRON’s hype is running on fumes; the market is not expecting big things to happen soon so our prediction is purely based on the overall demand for altcoins.

In the long-term, we expect two different scenarios:

To invest or not to invest?

Before investing in any cryptocurrency, you should do your own research. By simply reading this post you get an overview of TRON and its potential, but not a complete roadmap for the next year. Therefore, consider doing the following:

What does the community think about TRX? How many posts are positive and how many are negative? There are many ways to get a better overview of social media sentiment. You can start by checking TRON-specific hashtags on Twitter, check data from LunarCrush, or go through crypto-related channels on Reddit.

Take every prediction with a grain of salt

There are many different ways to invest in TRON (TRX). Some are more costly and complicated than others. When using Paybis to buy TRX, your first credit/debit card transaction is free from all fees and commissions, offering the best possible market price.

Remember the dangers of price volatility

Choosing to invest comes with its own risks. Therefore, before making a purchase make sure that your emotions are in check, and you can use your logic to plan ahead and make selling decisions. After all, crypto is most seen as a long term game.

TRON is certainly an interesting investment opportunity in a world where incentivized digital attention becomes more popular. The long-term goals of TRX make it a luring investment, but its short-term tactics also make it risky.

In this article, we shared our TRON price prediction and all the different scenarios that could affect its value. In short, we can believe that any of the three following scenarios could play out in the next few months (& years)

Keep in mind that none of the information presented in this article constitutes financial advice. We strongly recommend that you continue your research and form your own, individual opinion, without benign affected by marketing tactics that are so often seen in the crypto space. 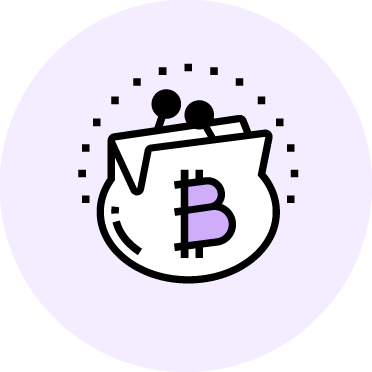 Has the Hyperbitcoinization Started? Looking at the facts

The Bitcoin network has already absorbed nearly $1 trillion in monetary value since its inception. This amount keeps growing as… 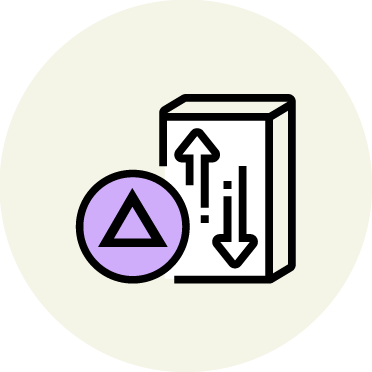 Basic Attention Token Price Prediction – What Does The Future Hold For BAT?

With Bitcoin retracing from its newfound highs, the cryptocurrency market has been experiencing a slight slump as of late. While… 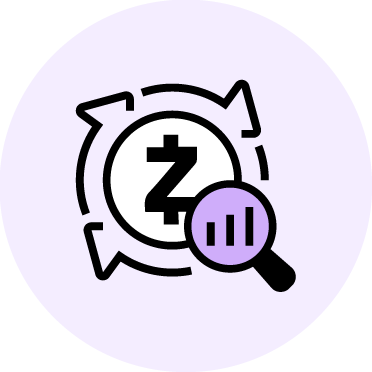 Zcash Price Prediction – Can ZEC Return To Its Former Glory?

Since the beginning of this bull market, a large number of cryptocurrencies have already seen large returns. Stimulated by DeFi… 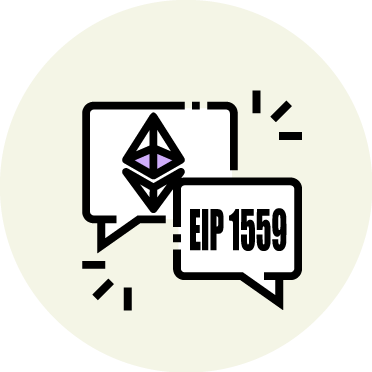 The sudden increase of Ethereum’s price over the past few weeks has been surprising for many investors. While Bitcoin maximalists…

How to use Bitcoin on Amazon – Ultimate Guide for Shoppers

How to Research Cryptocurrency – The 7-point Strategy