Zcash Price Prediction – Can ZEC Return To Its Former Glory?

Since the beginning of this bull market, a large number of cryptocurrencies have already seen large returns. Stimulated by DeFi growth and retail FOMO, altcoins have been showing price spikes matching those in 2017.

That said, privacy coins have been underperforming under current market conditions. Many haven’t even come close to their previous all-time high prices. Could this mean that there’s some untapped profit potential in this crypto niche?

To find out, we analyzed the market and decided to write up a thorough Zcash price prediction. In this article, we introduce you to the fundamentals of this popular privacy coin and explore some details of the technology behind it.

Moreover, we lay out the latest developments regarding privacy coins and deconstruct the upcoming updates in the ZEC network.

Finally, we use our findings to support our technical analysis and provide you with an accurate ZEC price prediction for the short, mid and long term. In the end, we determining if the ZEC price can return to its previous highs and strengthen your portfolio along the way.

A brief introduction to ZCash (ZEC)

ZCash is one of the most popular privacy-focused cryptocurrencies on the market. Announced as ZeroCash in a whitepaper in 2014, it was finally launched in October 2016 under the current name of Zcash.

The goal of this crypto was to provide a more private transaction environment than anything available at the time.

Being a fork of Bitcoin, ZEC is quite similar to its parent crypto, meaning it has a maximum supply of 21 million coins ensuring increased scarcity in the long run. Additionally, ZEC undergoes a reward halving event every 4 years, decreasing the number of coins put in circulation over time.

How does Zcash work?

In blockchains that don’t focus on privacy, the sender’s and recipient’s address, as well as the amount that was transferred remain accessible to anyone.

As such, government agencies and hackers can still link the data back to the individuals who made the transactions. ZCash provides a solution to this problem by introducing a privacy protocol known as Zk-SNARKS.

To be more precise, this protocol relies on the concept of zero-knowledge proof. This means that you can prove knowledge of information, without ever divulging this information to anyone.

Zcash users can opt-in for the level of anonymity they wish to benefit from, as the blockchain offers two types of addresses – shielded addresses (z) and transparent addresses (t).

It’s worth noting that, while transactions are possible between these two types of addresses, only z-to-z transactions remain fully anonymous. In this case, neither the sender, recipient, or the transaction amount is known.

Today, the Zcash development is handled by the Electric Coin Company (ECC), with Zcash founder Zooko Wilcox as the CEO. Over the years, the network has seen 5 major upgrades, each one further improving the security, privacy, and efficiency of the Zcash blockchain.

To justify our Zcash price prediction, we first need to explore the latest developments around privacy coin regulations and the upcoming updates of their networks.

Privacy coins are often erroneously viewed as a massive gateway for illegal activities. Despite reports showing that they are responsible for only 4% of such transactions, governments see them as a threat. As such, they are often under heavy regulatory pressure, which can be followed by delistings on regulated exchanges.

For instance, during a privacy coin delisting trend in the second half of 2020, Zcash was removed from major exchanges ShapeShift and Bittrex.

While delistings may be few and far between, they can have a significant impact on ZEC’s price. This is especially true when a high-volume exchange delists the coin. Hence, it’s essential that any Zcash investor closely follows regulation news and updates.

As we mentioned earlier, the ECC, which handles Zcash updates, is continuously pushing out protocol and network updates. 2021 seems to be their most ambitious year since the launch of the blockchain regarding protocol upgrades.

The recently-announced Halo Arc upgrade will modify the current zero-knowledge proof system at its core. It will bring scaling solutions as well as a more streamlined upgrading process to the network.

“With Halo Arc, we’re making it easy for wallets to support shielded Zcash by default,” said @jswihart of @ElectricCoinCo.
By @benjaminopowers https://t.co/VjvXMOBzVR

More importantly, by scrapping Zcash’s trusted setup, the network will be able to support additional assets. This would allow other projects to benefit from Zcash’s privacy features, which ultimately helps Zcash take part in the ongoing DeFi boom.

DeFi is in dire need of private transactions and ZEC could become the go-to solution if this update delivers on its promises.

Halo was initially announced for summer 2021, but the release of the first series of upgrades was postponed to October 2021. However, thanks to the new update process, upgrades should become more frequent going forward.

It’s clear that Zcash is still being actively worked on and that upcoming updates might set it up as the leader in the privacy crypto ecosystem.

To better understand our Zcash price prediction, we first need to have a detailed look at ZEC’s price action in the past few years. 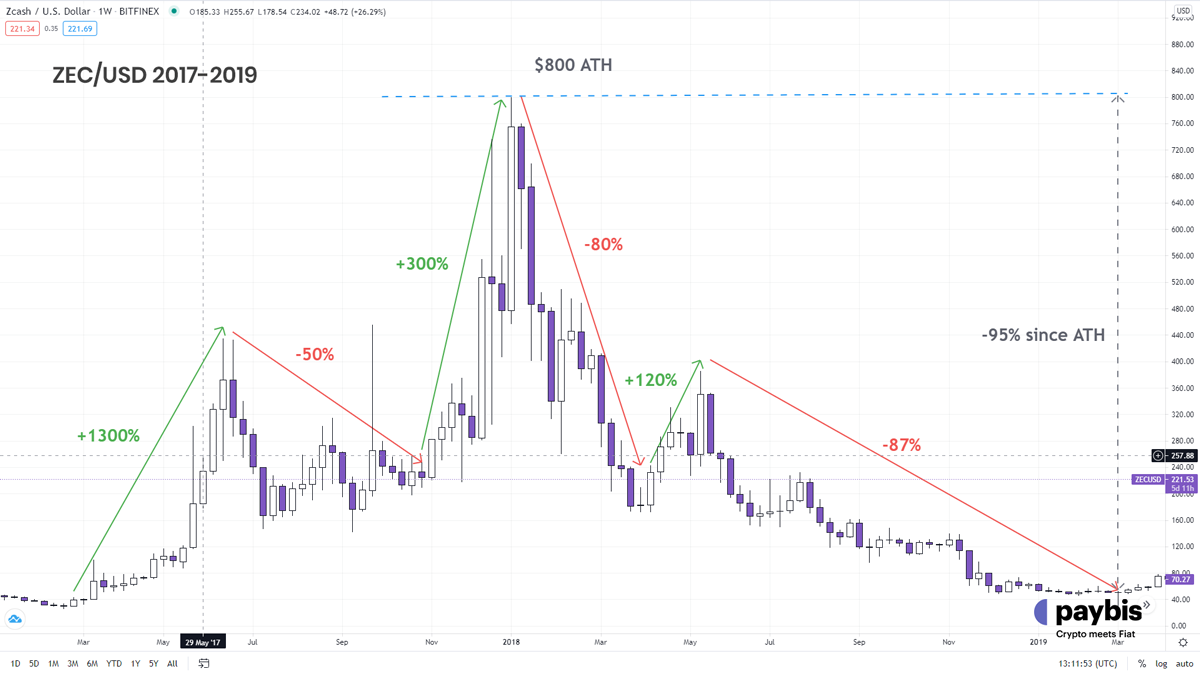 The ZCash network was launched right before the 2016-2018 bull market, which was both a blessing and a curse for the privacy coin.

Within 6 months following its release, ZEC rose 1300% only to retrace by 50% shortly thereafter. This started a pattern in ZEC’s price action that would repeat itself in the following years.

At the peak of the bull run, the candles reached as high as $800, marking a price spike of 300%. However, the bear market that followed wasn’t kind to ZEC investors. 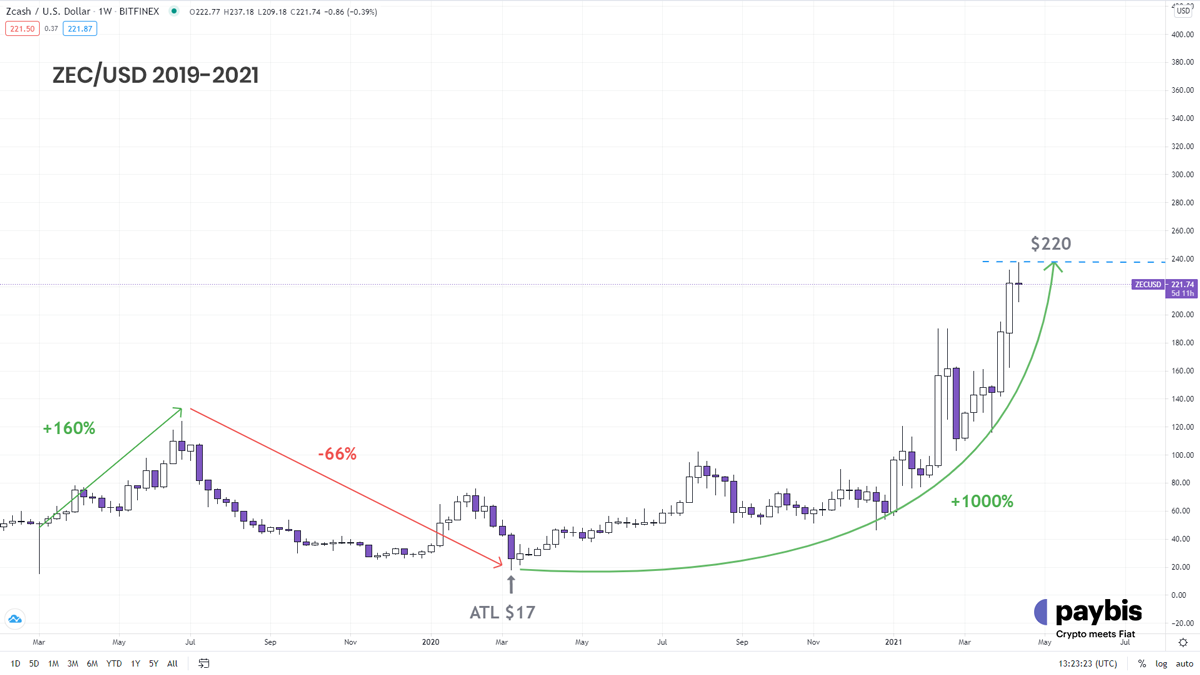 Even though the bear market was ruthless on ZEC, recovery wasn’t what we expected.

First, the price recovered significantly during the summer of 2019, showing 160% gains.  However, following regulatory pressures, the privacy coin entered a steady decline, reaching an all-time low of $17 right after the COVID19 crash. This equates to a 98% drop since its all-time high levels.

Since this event, the coin has entered a bullish trend. It has recently risen to a solid $220 price level, making 1000% gains since March 2020.

While the recent price increase is commendable, our bullish opinion extends in this Zcash price prediction.

Considering the current bull market and the trend that ZEC’s price has been following, we can’t find any significant resistance on the way up towards the previous highs of $800.

Furthermore, many other cryptocurrencies of the “prior generation” have already surpassed their 2018 ATH levels in 2021. Our fundamental and technical analysis confirms that the same might be true here and that full recovery is just a question of time. 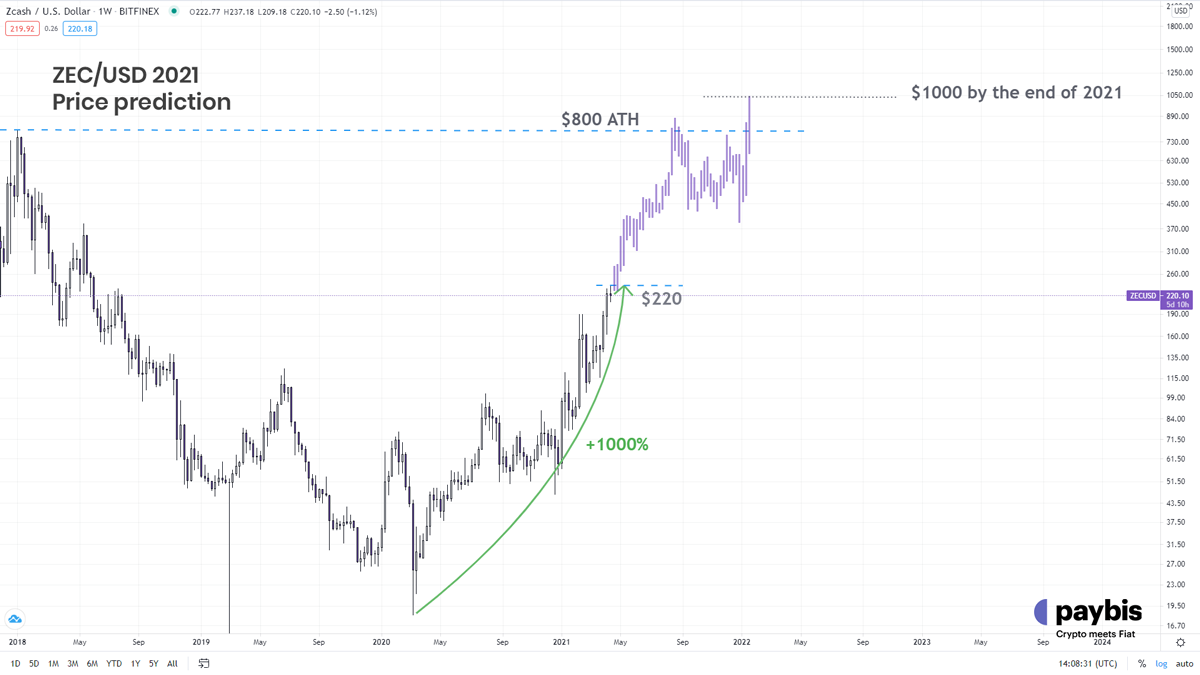 Unless the ECC fails to deliver on its promises, the privacy coin should reach its first significant resistance at $800 by the end of August 2021.

Here, we might see some consolidation in the $500-800 zone, followed by a considerable price increase towards $1000 levels after the 1st Halo Arc upgrade in 2022.

There’s a large number of factors that can influence the price of a cryptocurrency over 4 years. Although challenging, we can rely on some of these technicals and fundamentals to provide you with a plausible Zcash price prediction for 2025: 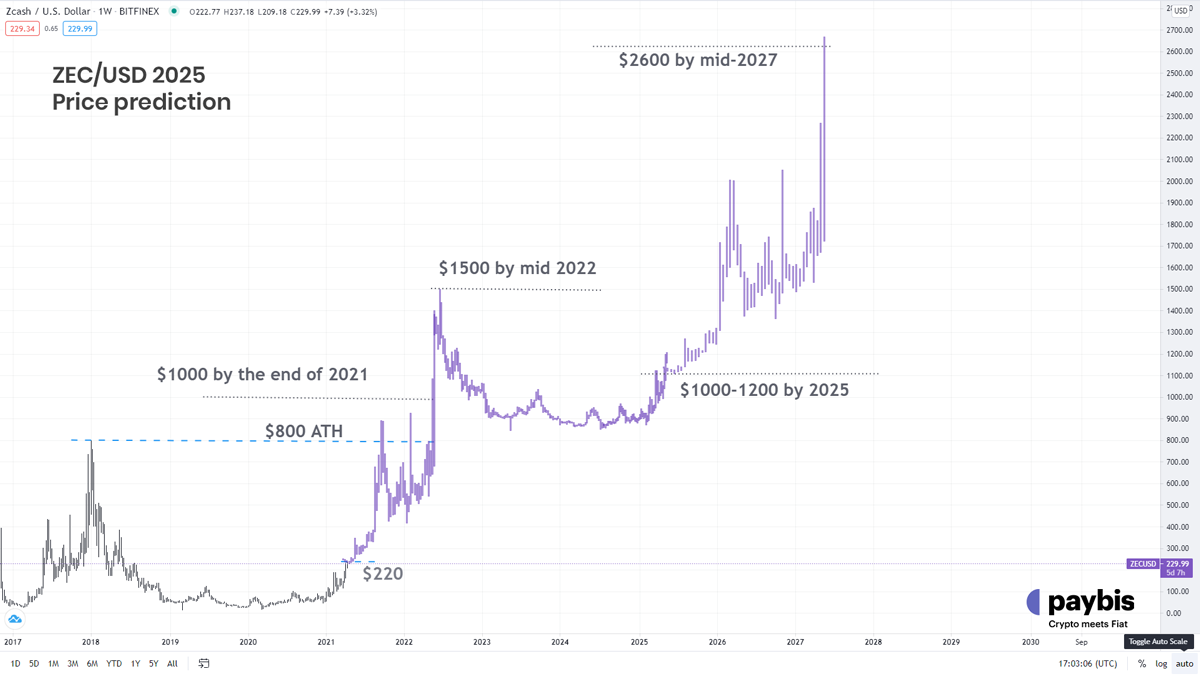 Following this reasoning, we can expect ZEC to reach $1500 at the end of the current bull run before it retraces to the previous $800 ATH levels over the next few years.

If historical price action patterns are conserved, the candles should find support in the $800-1000 zone until the end of 2024.

The new bull cycles should push the price towards $1200, preparing Zcash investors for another leg up. By the end of the next bull cycle in 2027, ZEC could reach as high as $2600 per coin.

Providing a Zcash price prediction becomes almost impossible when looking more than 10  years in the future. It’s obvious that cryptocurrencies disrupted almost every industry known to man and will continue to do so in the near future.

However, it’s hard to say if they will still be used in 2050; let alone in their current state. This is especially true for privacy coins like ZCash.

Even our current financial system might collapse by then, following the destructive monetary policies of most major governments. Due to this, it would become pure speculation to attempt a precise Zcash forecast for 2050.

We browsed for other expert’s opinions on Zcash price forecast in the short and mid-term to see if they correlated with ours. 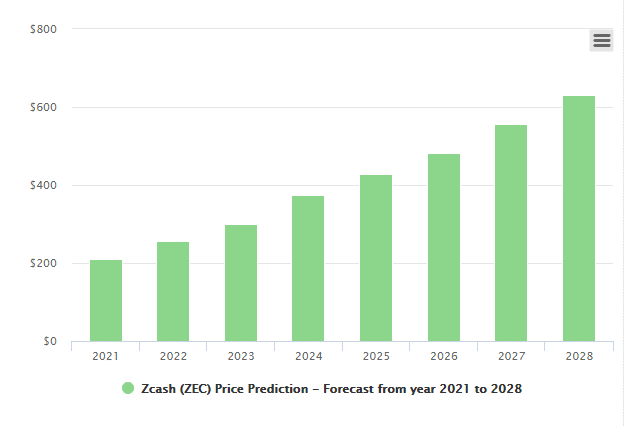 If you are interested in conducting your own Zcash price prediction, a few essential tools can help you achieve this.

In this article, we went over the basics behind the Zcash blockchain and the detail on how its privacy protocol functions. Additionally, we explored some important upcoming events and combined these findings with sound technical analysis. This allowed us to provide you with  the following Zcash price prediction:

In our opinion, Zcash still has a lot of room to grow in the current bull run. This is especially true when we compare it to other coins in the top 50. With that said, it is crucial for ZEC to deliver on its promises for the Halo ARC updates.

In this case, Zcash could be included in the DeFi ecosystem and beat competitors such as Monero (XMR) at becoming the best privacy coin on the market.