Why Biden’s Wealth Tax Proposal is Bullish for Crypto

While eyeing the threat of a regulatory “breakdown” on cryptocurrencies, American investors recently experienced just how far the Biden administration is willing to go.

The president of the United States brought forth a new proposal that aims to impose an additional wealth tax on individuals earning $1 million or more per year. While not solely aimed at crypto investors, this is one of the many adjustments that the administration is looking to impose in order to counteract the increased inflation rates, fund education, and improve child care.

The announcement of the new bill proposal caused a massive selloff in both the stock market and the crypto markets, with many fearing the start of another bear cycle. But is this really the case? Why would anyone sell their crypto at this point, only to cause a taxable event? We attempt to answer this, and many more questions, in the following chapters.

The US economy has been in a steady decline

While the powers in control like to shrug off the increased inflation rates as “normal”, claiming there is nothing to worry about, we have already seen a massive increase in commodity prices:

Many claim that, since the start of the COVID-19 pandemic, the US has been spiraling into a controlled demolition of its economy, an issue that can only be resolved by introducing more money into the economy. This only amplifies the problem, increasing prices, even more, especially for real estate.

Owning a home is slowly going from being an American dream to an American utopia – and only a handful of people will ever be able to afford one. Those are the individuals that choose to build businesses in the US, creating new jobs and playing their role in the growth of the American economy – the so-called millionaire investors.

And it now seems that these are the exact people that might be “rewarded” with a new tax that will effectively transfer the majority of their income (a taxation increase from 20% to 39,6%) to the tax office. This, of course, also affect cryptocurrency investors.

Bitcoin taxes are nothing new

First off, it is important to realize that most countries charge capital gains tax on realized profits made through cryptocurrency hodling. Traders are taxed per trade (taxable event), while some countries have even introduced a small annual tax based on the total wealth of an individual (realized or unrealized). Hence, it would be futile to claim that taxes are new to crypto.

What is, however, still volatile is the changes that regulatory frameworks implement. These tend to become tighter as Bitcoin increases in institutional and geopolitical importance, especially in times of economic uncertainty. And, by many accounts, the US is currently facing its worst economic year since 1929.

Christine Lagarde, President of the European Central Bank mentioned in a recent interview that Bitcoin is the escape of the financial system, framing it as a speculative asset used for “funny business” and money laundering. Of course, both terms refer to the same assumption which is not true when looking at data provided by Chainalysis. Nonetheless, it is clear that BTC and decentralized financial networks, in general, pose a threat for governments on a global scale.

As a result, we hear from prominent investors like Ray Dalio and Frank Giustra that Bitcoin faces the risk of government restriction, whether this comes by controlling on/off ramps or the ability of residents to use exchanges.

Why these rumors are bullish for Bitcoin

Bitcoin maximalists argue that no country can ban Bitcoin; they can only exclude themselves from the network. And that is true. It is very difficult, if not impossible to see a synced global restriction of internet access, which would be the only way for the Bitcoin network to stop growing.

Governments recognize that fighting Bitcoin may not be in their best interest. Instead, they take the second-best option, which is taxation. Don’t be fooled though – as years pass, technology will enable authorities to improve their strategies of tracking, making it almost impossible the hide behind the pseudo-anonymity that the BTC blockchain offers.

Vijay Boyapati has laid out how Bitcoin’s geopolitical importance will cause numerous countries to start hoarding it with their central bank’s cash reserves, similar to gold. This will cause a nearly certain “supercycle”, a term described by Dan Held.

In short, Bitcoin has a strong possibility to see a hockey stick-like price growth that could drain all supply on exchanges and take the coin’s price to $1.000.000 or higher. If this happens, it would become impossible to buy Bitcoin on exchange platforms, as institutional investors will likely be buying BTC directly from miners.

The importance of DeFi

As more and more financial services seem hesitant to welcome technologies that remove the middleman, and thus the concept of trusted third parties, new investment opportunities arise. We saw this increase in popularity in the summer of 2020 when Uniswap trading led to labeling the third quarter of the year as “DeFi summer”. Lots of money-making opportunities arise as this is not simply a new sector, but a complete shift of all sectors to trustless and decentralized foundations.

Of course, to participate in DeFi investing, you’ll need to own Ethereum or other governance tokens of supporting chains, such as BNB. Hence, the whole industry as well as new buyers benefits from the technological shift and investment opportunities.

Public ledgers (blockchains) enable any participant of the network to access the transaction records and see how certain cryptocurrencies flow between wallets. While you may think you can outsmart the government, it will always be possible for funds to track back to your account as soon as the funds end up in a whitelisted wallet. Hence, you are asking for trouble.

Let’s put it this way – Since the outlook of bitcoin is bullish, you will likely see a large appreciation of your net worth. Why not just pay your dues and eliminate the stress? In any case, the odds of increasing your net worth seem to be in your favor.

A peek into the future

When looking at fundamental value, market sentiment, and chart patterns, it is easy to conclude that Bitcoin is nowhere near its peak in this cycle. While there certainly is some unease, especially for new investors, it is important to look at history as well as price indicators in order to make realistic claims. This makes many wealthy investors think about the future and all the possible ways in which they could benefit from the system in order to avoid taxation.

While we strongly recommend you to talk with a tax attorney or specialized accountant, we do notice a relocation trend building up among the crypto crowd.

I hear Puerto Rico is nice this time of year…

There are several countries that do not charge capital gains tax and do not require investments in real estate in order for you to claim permanent residency. While Puerto Rico, Isle of White, Portugal, and certain Caribbean islands seem to be the popular choice, there is currently a global restructure in terms of taxation to address the issue of cryptocurrencies. Hence, once again, if you are interested in such options, it is best to talk with a professional in your location.

“I lost all my crypto in a boating accident” is a term-turned-meme across social media platforms and forums whenever tax season is around the corner. In fact, it is either this or a series of videos where a bunch of Youtube influencers seem to have their hardware wallets hacked [err… that’s impossible?].

Such practices are primarily done to avoid the taxman, in a sector that people wish to believe is still a “wild wild West”. But it isn’t. Over the past few years, authorities have managed to resolve criminal investigations and seize illicit funds from hundreds of people, simply by tracking the coins on the blockchain.

In the future, and while Bitcoin continues to grow, authorities will continue to develop more sophisticated systems that will improve the tracking of funds across the public ledger. This, paired with the eventual elimination of cash should lead to a decrease in money laundering, tax evasion, and criminality.

So why would anyone choose to sell right now?

According to Glassnode, 20,370 bitcoins have been transferred to exchanges in the past few days. Combined with the bearish sentiment and negative price trend, these BTC will most likely be sold in the open market, adding more selling pressure. The last time we saw such high inflows to exchanges was during the pandemic-related crash in March 2020 (a.k.a. The Black Swan event). 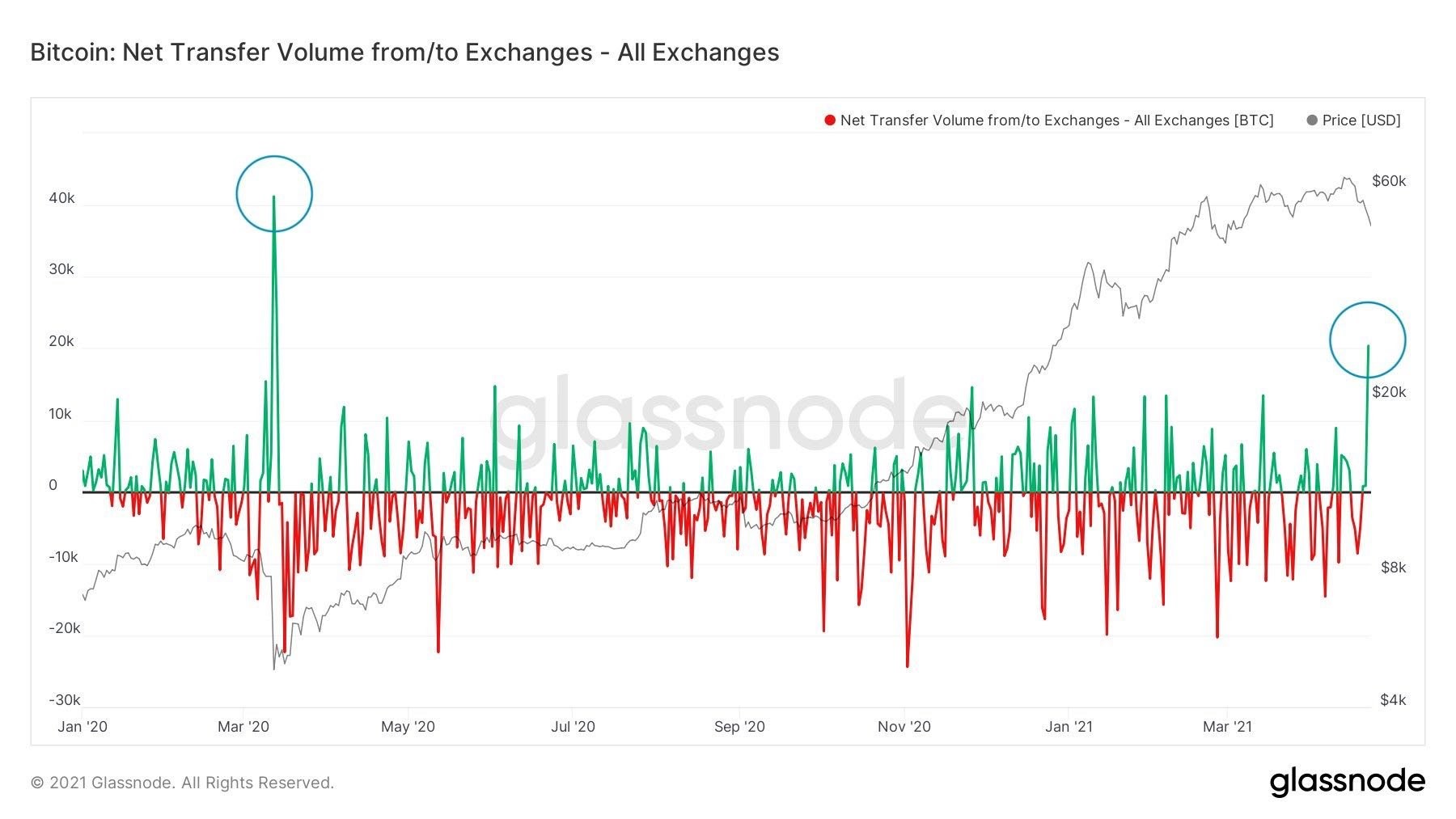 Does this mean that people are selling? Some of them certainly will. However, when asking experienced traders we get a different opinion. According to them, investors are sending Bitcoin to exchanges in order to buy quarterly futures contracts (a.k.a. long) and sell spot positions, in order to create easy profits. Keep in mind that most exchanges nowadays are not limited to spot markets, but also feature a large array of derivatives products.

And that beings us to the end of this article. You should now have a better idea with regards to the recent market drawdown and how the recent tax proposal played a role in the volatility. Bitcoin still seems to have a positive path ahead, and its current dips serve as a reminder that “weak hands” do not deserve the asymmetric rewards that come with the opportunity.

For further reading, note that we have previously written about Bitcoin taxes and how these lead to an increase in mainstream adoption. That said, if and when you make the decision to cash out (part of) your crypto, it is best to contact a professional in your location to get reliable information. 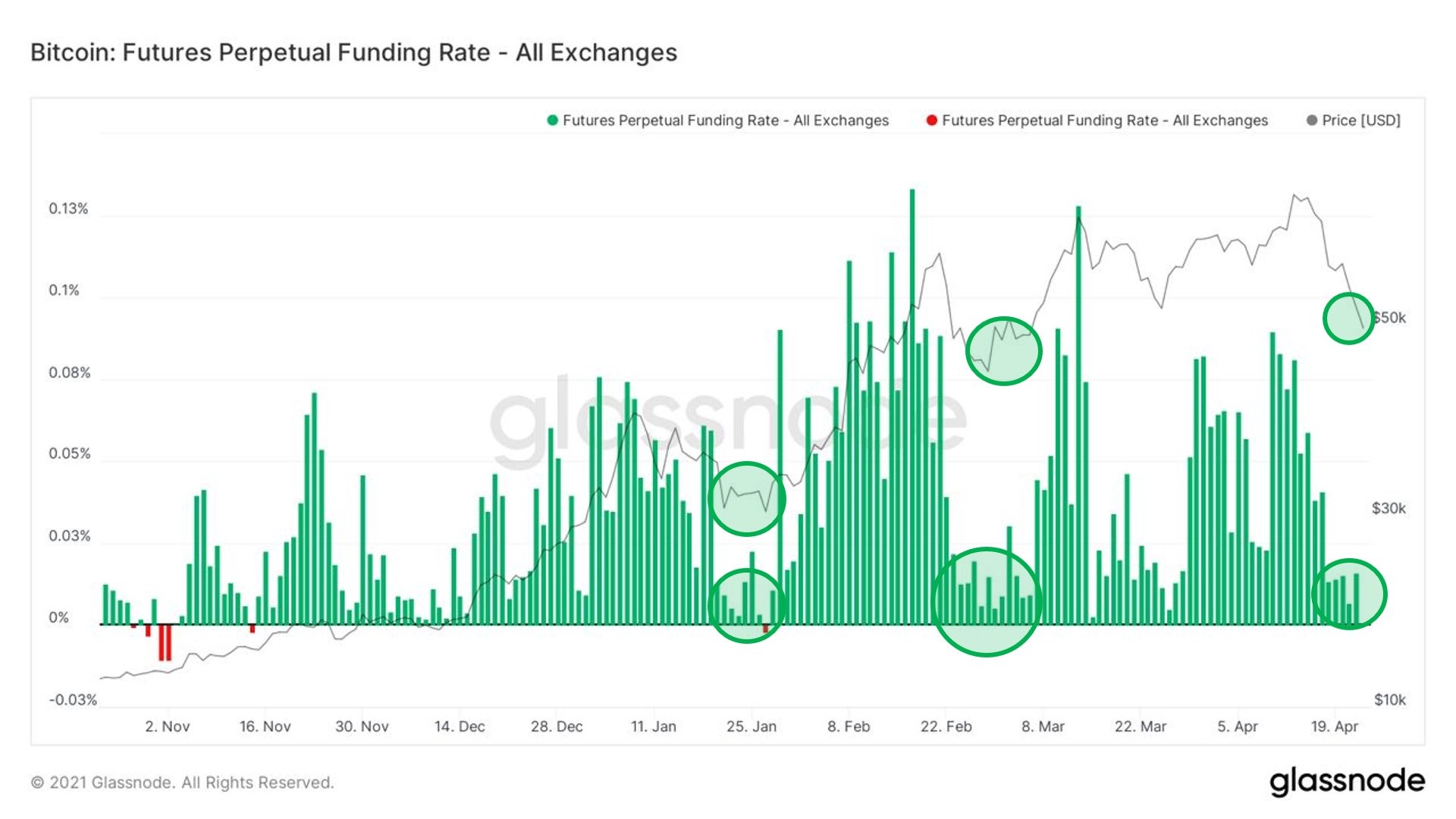 Historically speaking, long contracts experience a sharp increase right after a sharp price drop, and we have seen the same happen in the previous dips of 2021.

Both charts point towards a recovery ahead. Hence, it is safe to assume that the price drop we experienced is most likely caused by FUD and spread through the bearish sentiment of inexperienced retail investors.

In many ways, this is good news. Institutions have been waiting patiently to enter the space at lower levels, and we can only assume that Michael Saylor and his peers will step in to scoop up a large portion of those cheap coins.

As the network continues to remain volatile in a predictable manner, we expect to see more institutions finally taking the leap, a decision that will inevitably strengthen the network and further diversify the available coins among “stronger hands”.