The number of DeFi users is increasing daily, and the tech itself is contributing towards creating a viable Metaverse for humanity.

What is Mina Protocol?

Scaling problems have been plaguing the blockchain ecosystem since day one. As more people join DeFi, transactions become slower and more expensive. The latest Ethereum EIP-1559 update did little to address these issues, and users are still facing high gas fees for creating NFTs or swapping tokens.

Consequently, scalable blockchain layer 1 protocols such as Solana, Binance Smart Chain, and Cardano have become quite successful. That said, none of them has really addressed the issue of the increasing size of the blockchain. As transactions are recorded on the ledger, blockchains grow bigger over time. Ultimately, they become too large to store on commercial-grade hardware, which increases their running costs significantly.

The Mina Protocol tries to solve this issue by providing an innovative take on how blockchains are stored. The result is an open-source blockchain protocol that weighs only 22 kilobytes! The protocol employs a novel zk-SNARKs technique that allows the blockchain to stay at this fixed size, regardless of how many transactions are made over time.

The science behind Mina Protocol

To achieve this feat, Mina relies on a proof-of-stake network that is coupled with zero-knowledge proofs. This allows it to create a trustless environment where a large number of nodes can verify the validity of its blockchain by using minimal computational power. Its native MINA cryptocurrency serves as a means of exchange and a currency for paying gas fees on the network.

That said, 22 kilobytes is a very small number, as it equates to just a couple of text files. So how is this possible? How can the entire history of blockchain transactions be stored in such a small storage space? Well, that’s where things get interesting and give us a bullish view on our Mina price prediction.

A 22kb blockchain – how is this possible?

In traditional blockchains such as Bitcoin and Ethereum, miners and validators are required to download the complete history of the blockchain in order to participate. This is so that their data can be compared with the rest of the nodes and ensure the validity of their work.

With the zk-SNARKs on Mina, validators do not need enormous amounts of data to update the blockchain. Mina verifies that a sequence of blocks a few blocks behind the current block is valid. Through this, it creates a cryptographic proof that represents the state of the entire blockchain, instead of storing the data of all the blocks.

Then, proofs of previous proofs are created, to keep the size at a fixed 22kbs.

Validators can store this lightweight snapshot of the entire blockchain, instead of storing the entire ledger of transactions. Each proof contains the previous proof, but never grows in size, keeping it to a fixed 22kb.

The nodes on Mina are called non-consensus nodes, and need only 5 pieces of data stored in memory to participate as validators:

When combined, these components equate to 11kb. The developer team has since increased the to a final 22kb so that the network could be even more efficient.

On Mina, every participant in the network runs a node, without exception. Thanks to the low processing power required for Mina, literally every user is a validator of some kind. There are three different types of nodes that are vital to the functioning of the network:

Validation of blocks is done through a marketplace, which the team has wittily named the Snarketplace. Block producers add work tasks on this marketplace, in the form of blocks of transactions that require SNARKS in order to be verified.

SNARK workers then process the data and provide SNARKs for each of the blocks in the queue. Block producers purchase snarked blocks for MINA tokens from the workers and add them to the blockchain.

To be able to keep the size of the blockchain small, blockchain producers must purchase the SNARK before they can move on with a new block. This also allows for a fair distribution of MINA tokens to both block producers and SNARK workers. 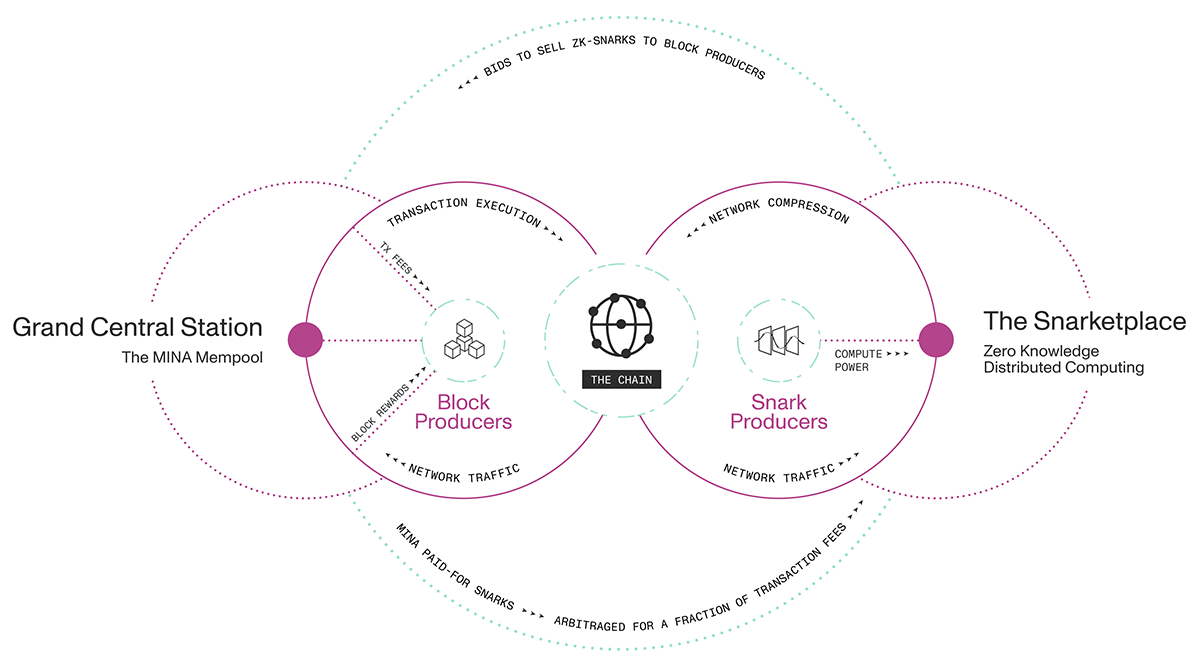 As we briefly mentioned, the Mina Protocol relies on a PoS, which is handled by the Ourobouros Samisika algorithm. It’s based on Cardano’s Ouroboros consensus mechanism with a few modifications to accommodate the zk-SNARKs basis of Mina.

In essence, this algorithm randomly selects nodes to produce blocks. Similar to Cardano, the random selection of the algorithm is influenced by the number of MINA tokens that the validator is actively staking. The larger the stake, the better the chances for Ourobotos to choose you as a validator.

But unlike the original Ouroboros protocol, Samisika doesn’t check history, because this history isn’t stored anywhere. Instead, it checks for the chain density. This single number is very easy to compute which contributes to the scalability and high transaction speeds of the Mina blockchain.

Finally, to continue our Mina Protocol price prediction, we need to talk about Snapps. Snapps is a cool monicker for decentralized apps on Mina that use zk-SNARKs for scalability.

On traditional smart contract platforms, all nodes must run the same calculation in order to verify the execution of the dApp on the network. However, this is an inefficient process, as it wastes energy for a task that could have been completed with a lot less effort.

On Mina, only the Snapp creator needs to execute the Snapp. Afterward, the nodes just need to validate the proof that is associated with this Snapp. It requires considerably less energy and is much more scalable than any current blockchain.

Teller Finance is one of the first examples of functional Snapps on Mina. This DeFi platform allows users to take out risk-assessed loans without providing collateral. It relies on the zk-SNARKs proof of the Mina Snapps to assess whether it can allow users to borrow funds.

In a nutshell, the platform can fetch proof of the user’s credit score, instead of getting the private details of the user. This allows the user to keep their privacy and never share their real credit score on the DeFi platform.

Why Mina stands out from the rest – Benefits of Mina Protocol

As you may have already guessed, Mina Protocol has the upper hand over other blockchains when it comes to the storage space it requires. However, there are some additional benefits we might have not mentioned yet, including:

The Mina project is quite recent, so there haven’t been many noteworthy developments in its ecosystem yet.

That said, in September 2021, the team announced that it was partnering with the popular Layer 2 Solution Polygon. Both teams are working towards implementing the privacy features of Mina into Polygon. This, in turn, should allow anyone that uses Polygon for faster Ethereum transactions to benefit from zk-SNARKs privacy features.

Ultimately, this move will bring increased privacy to the DeFi ecosystem. Users will be able to meet rumored KYC requirements for DeFi platforms without exposing sensitive data to everyone. 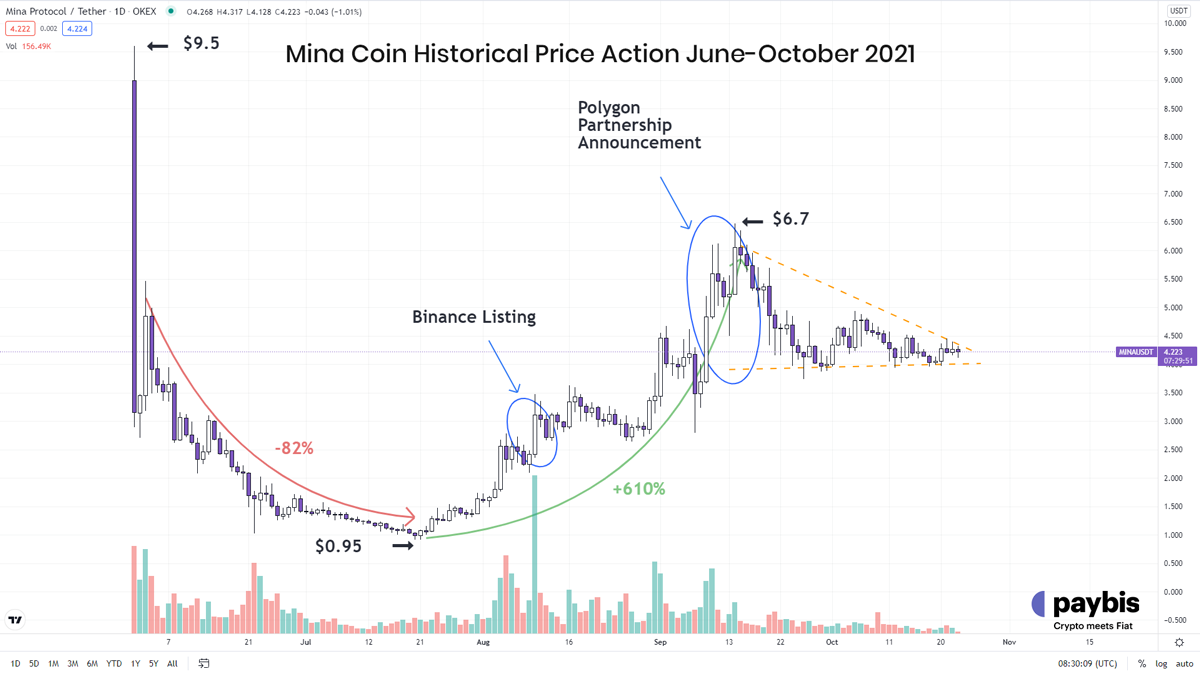 The Mina token was distributed through an ICO in April 2021, where 28% of all of the total supply tokens went on sale. During the crowd sale, users could buy MINA for $0.25 per token. The first exchange listing occurred in June on the popular Okex exchange, at $9 per token.

This resulted in a huge sell-off by ICO holders, with the price falling back to $4, a 65% decrease. In the first month following the listing of Mina, prices fell to a low of $0.95 per token.

However, as awareness and interest started growing in the community, the price has reversed into a positive trend. The prices slowly climbed to recovery, and two bullish announcements managed to confirm the momentum:

For our Mina Protocol price prediction 2021, we remain bullish on this coin, although with a few short-term reservations. 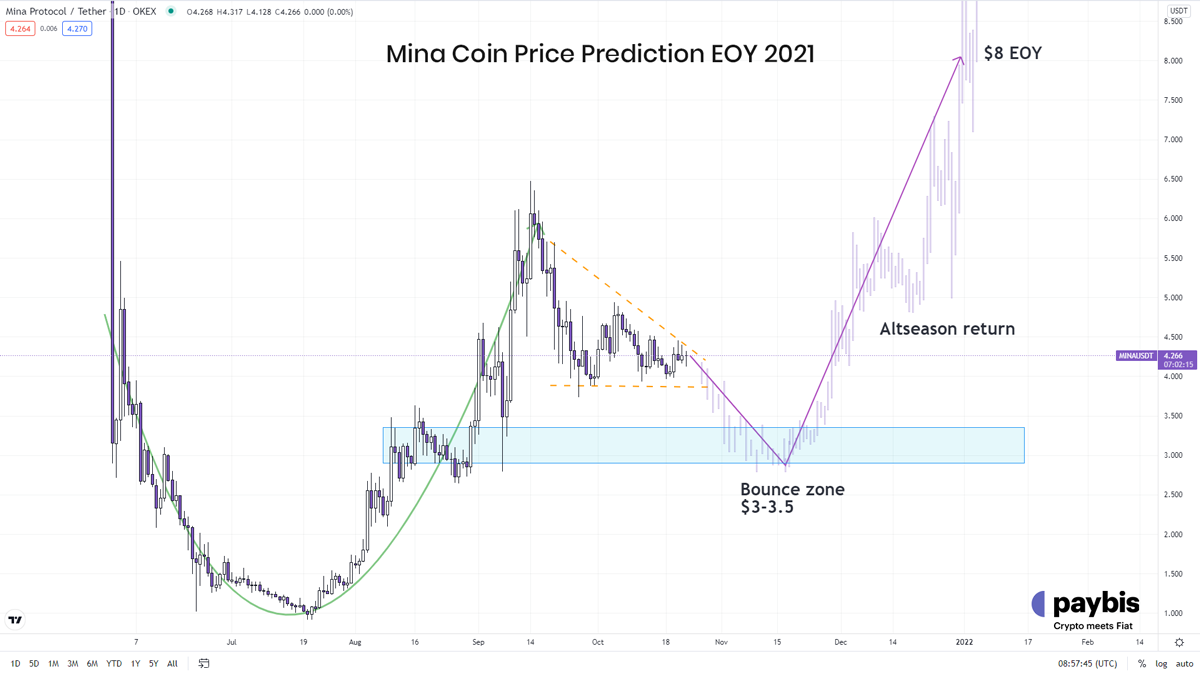 In the current state of the market, Bitcoin remains king. This leaves little room for altcoins and recent projects like Mina to shine. Consequently, we can expect the Mina token to break down the bearish triangle pattern that it’s currently following.

However, we also expect that the bearish momentum for altcoins should end somewhere in mid-November. At that point, the candles could bounce off the $3 level and enter an exponential price increase that could reach up to $8 by the end of 2021.

Given the small amount of historical chart data, we can’t rely on technical analysis for the long-term Mina Protocol price prediction. However, fundamentals allow us to predict a fair price between $25 and $50 per MINA token by the end of 2025.

In the meantime, MINA should reach at least $15 in 2022. Adoption of the Mina Protocol in the DeFi ecosystem is expected to be the main catalyst in MINA’s bullish price. But because history repeats itself, especially in crypto markets, another bear market could be right behind the corner. Consequently, the price of MINA could remain between $5 and $10 for the most part of 2023 and 2024.

Providing a Mina Protocol price prediction almost a decade in the future is quite challenging. We can hope that the awareness of the MINA platform had reached its peak by then, with thousands of projects using its lightweight infrastructure to provide their Web 3.0 services.

Mina could be installed on every smartphone in the world, turning it into the most decentralized network in the world. This mass adoption could push prices of MINA tokens to reach hundreds of dollars, making it one of the best long-term investments of the decade.

This, is, of course, in the case that the development team delivers on their promises and continues to push out regular updates and improvements.

In this article, we provided you with the basics of the Mina Protocol, the lightest blockchain currently available. We analyzed its fundamentals and benefits, which provided us with a solid base to give the following MINA price prediction:

Keep in mind that these predictions are just the opinion of our analysts and not financial or investment advice of any kind. Make sure you always do your research and assess the risks before investing in cryptocurrencies such as MINA.