What is Cardano? – The Ultimate Guide to ADA Cryptocurrency

The cryptocurrency market seems to be at a crossroads. The majority of coins are currently in a price decline, with most sitting at 50% of their recent peak.

Currently, there are two schools of thought on the status of the market. Some believe that the bull run is over. Others believe that the current consolidation is a setback and that we will be seeing a rally towards new heights.

Regardless of way things play out, some cryptocurrencies remain solid investment opportunities. Cardano is one such coin.

In this introductory post to ADA, we explore what is Cardano, and why it’s so popular. We look into the core technology of the project and the upcoming updates that you should keep in mind.

Additionally, we talk about the advantages and drawbacks of Cardano and where to purchase it. Finally, we will wrap up our analysis with a short price prediction, providing both bullish and bearish scenarios.

But first, let’s explore some of the basics of the Cardano blockchain. This should explain why ADA surged to the top 5 cryptocurrencies by market cap.

Cardano is an open-source blockchain project founded by Charles Hoskinson, one of the co-founders of Ethereum. ADA, the project’s native token, was released in 2017, during the peak of the ICO craze. Ever since then, the blockchain has seen multiple upgrades, which has kept it relevant today.

The Cardano blockchain is a smart-contract capable platform similar to Ethereum. With the main difference that it runs on a Proof-of-Stake (PoS) consensus mechanism. It is simultaneously developed by three collaborating entities:

All in all, the Cardano project is a tightly knit organization, led by proven experts in the field that have always delivered on their promises thus far.

How is Cardano different from other blockchains?

Cardano has many unique characteristics, but to get started on what is Cardano, we can pick out one in particular. Unlike many of the top blockchains, Cardano’s launch wasn’t backed by a white paper.

Instead, this project was the first peer-reviewed blockchain, developed by academic experts in the field.

Cardano is considered a third-generation blockchain. Bitcoin and similar blockchain are considered first-generation as their usability is limited to online transactions. Ethereum is considered to be a second-generation, as it offers smart contract capability. Albeit with limited scalability due to its PoW validation algorithm.

Consequently, Cardano tries to solve some of the shortcomings of Bitcoin and Ethereum. More particularly, their transaction speed, scalability, centralization, and huge environmental impact. To this end, Cardano functions on a layered blockchain architecture, and is separated into the 3 following layers: 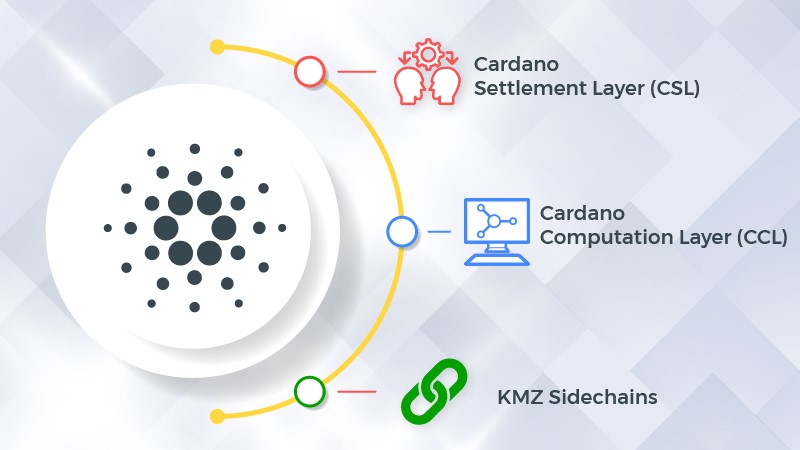 And finally, the teams behind the project have been developing their proprietary PoS consensus mechanism called Ouroboros.

To understand what is Cardano, we need to talk about its block validation mechanism first. The trademarked consensus algorithm of Cardano is a PoS model with some added variations. Named after the serpent that eats its own tail, it relates to Cardano in the cyclical nature of the consensus mechanism.

Led by Aggelos Kiayias at the University of Edinburgh, the team behind the algorithm has divided physical time into blocks called epochs, which are further divided into “slots”. These epochs work in a circular fashion (hence the name Ouroboros), and as one epoch ends, another comes online. 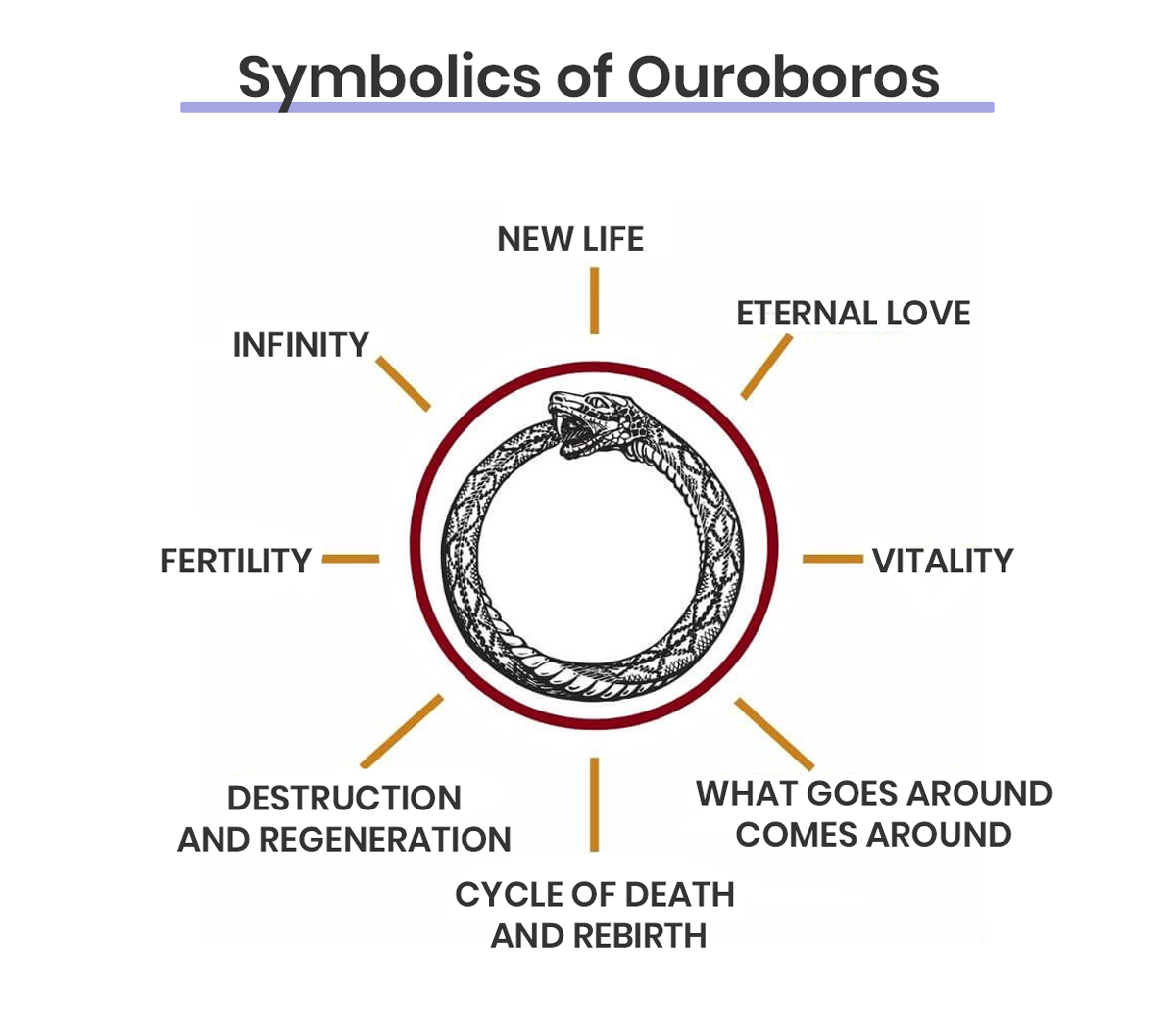 Like in other PoS models, the Ouroboros consensus model chooses the block creator randomly, following the number of ADA coins staked on the network. Because not all stakeholders can be eligible to produce blocks, their holdings can be delegated to other block validators. This way, they can still receive rewards for staking their coins.

Within each time slot, the algorithm chooses a slot leader. This leader is responsible for choosing the nodes that will participate in the block creation. In the Cardano blockchain, two types of blocks can be added:

The slot leaders elect the leaders of the following epoch through a randomized mechanism, where every leader tosses a virtual coin to cast their vote. This system adds another layer of decentralization to the Cardano blockchain.

The ADA cryptocurrency – what is it for?

The ADA cryptocurrency, named after the revolutionary programmer Ada Lovelace, is the native token of the Cardano blockchain. As such, it has multiple uses within this ecosystem:

To understand what is Cardano, we need to take a look at its 5-point roadmap, separated into eras.

The initial release of the Cardano mainnet was launched in 2017, and contained the groundwork for the Ouroboros consensus mechanism. Additionally, during this era, the two main wallets of the IOHK for ADA were released:

During the Shelley period, the staking mechanism for ADA was implemented. This allowed for the full decentralization of the network and allowed users to gain passive income through their holdings.

This increased the intrinsic value of the network considerably, which contributed to the initial price rally for ADA in the spring of 2020.

The Goguen era is a crucial step forward for the Cardano network, as it will allow for the deployment of smart contracts and the ability to build dApps. This means that very soon, Cardano will become another major player in the decentralized finance ecosystem.

In March 2021, a significant step forward in the Goguen era was the implementation of the aforementioned native tokens in a multi-currency ledger.

During this era, the team will be focusing on improving the interoperability and scaling of the Cardano blockchain with other systems.

Furthermore, it will introduce sharded chains that will allow the network to delegate workloads to sidechains, increasing transaction speed and scalability.

Finally, the Voltaire era of Cardano will bring improvements to the governance of the network, allowing it to finally be self-sustaining.

It will introduce voting systems where participants will be able to use their staked ADA to influence further development of the blockchain.

Moreover, to support these ongoing upgrades, a treasury system will be implemented. A fraction of the transaction fees of the network will be reserved in a pool and used for development activities that have been decided in the voting process.

Now that you know what is Cardano, it’s time to give a short summary of its pros and cons. This should give you a good idea of why buy Cardano.

The main benefits of Cardano as a third-gen blockchain are:

However, this blockchain does have some drawbacks, including:

Now that the question What is Cardano has been answered, we can provide a short ADA price prediction based on the fundamentals of the project. We will combine these findings with some technical analysis to provide the most accurate Cardano price prediction for EOY 2021.

Below is our prediction based on a bullish view of the markets. In this case, we look at the price of ADA by supposing the crypto market will resume the current bull run. 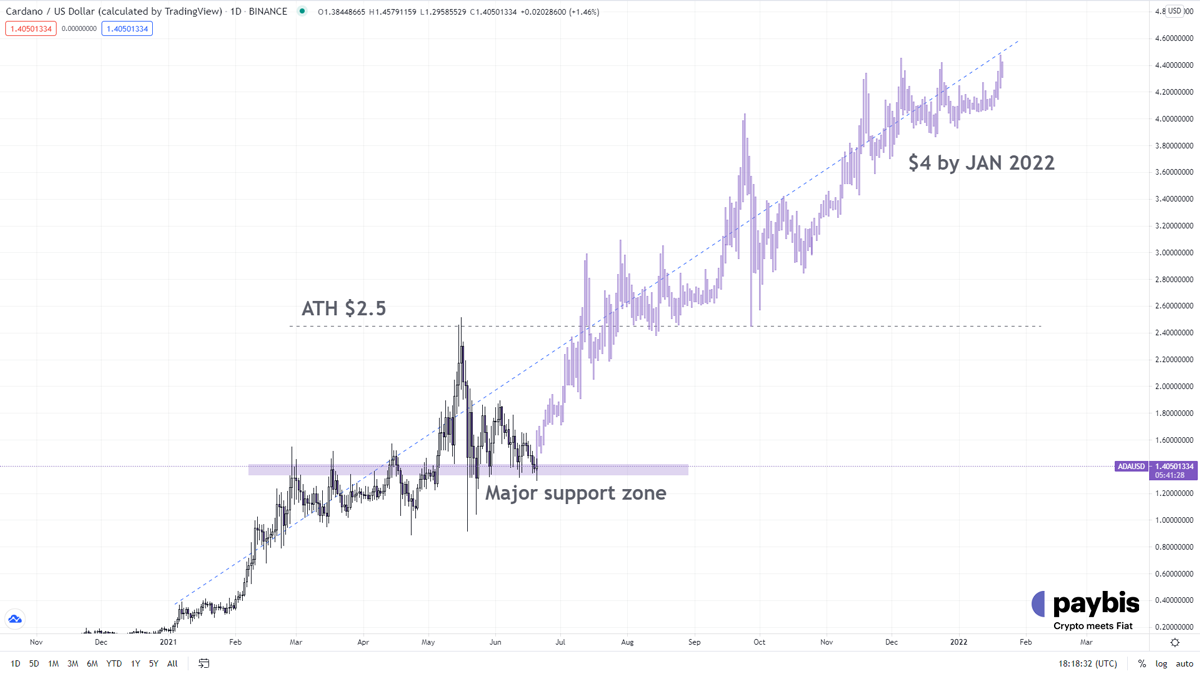 If the candles continue to find support at the current price level of $1.5 per ADA, we could see the trend reverse into bullish in the upcoming weeks.

The price could then resume its ongoing uptrend, and reach $4 by the end of the year. Considering the high volatility of the cryptocurrency this year, this will certainly be a bumpy road, filled with big price fluctuations.

With that said, we need to see both sides of the coin when making an ADA Cardano price prediction. Below we take a look at ADA’s price in the case where we enter a premature bear market this summer. 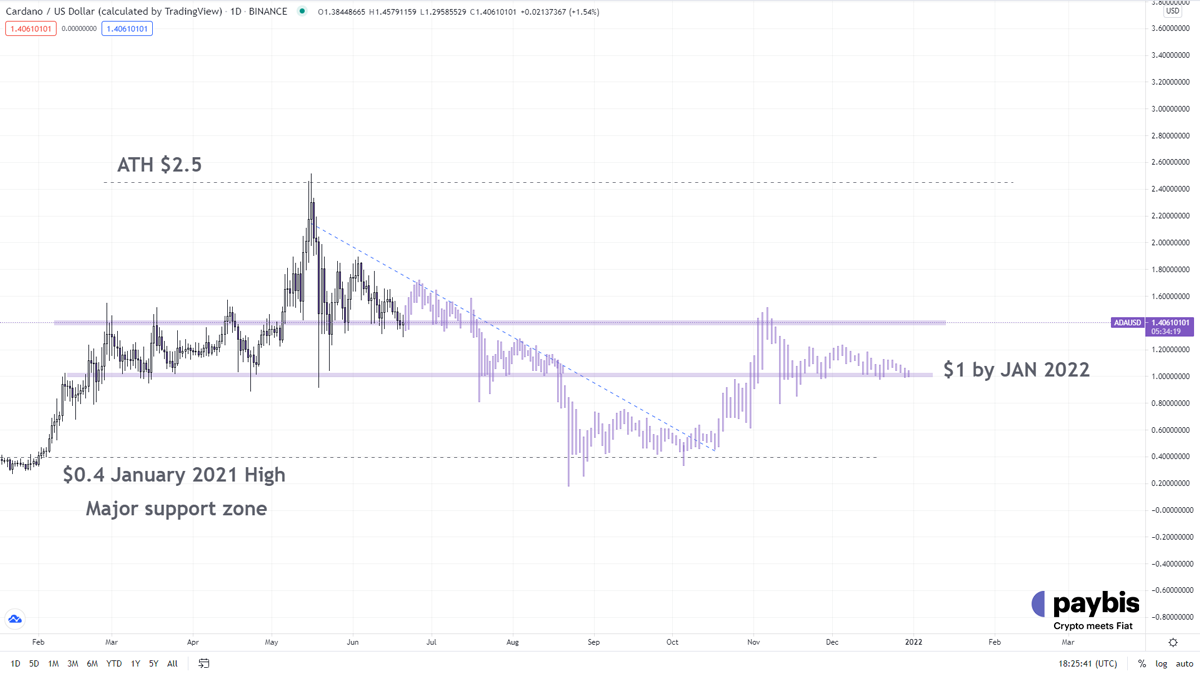 On the flip side, we can expect the ADA price to continue the current bearish trend and tighten up in a descending triangle formation. This bearish candle pattern could be broken to the downside, bringing the price to early 2021 levels, at $0.4 per coin.

This price level could act as solid support. Consequently, we can see the trend regain some positive momentum, and return to $1 price levels by the beginning of 2022.

Where to buy ADA?

Cardano is a top 5 cryptocurrency, so if you are wondering where to buy Cardano, you won’t have to look very long. Almost every major exchange offers ADA tokens, including Binance, Coinbase, and Kraken.

You will usually be able to buy it directly with FIAT, or a wide array of other cryptocurrencies, including BTC, ETH, USDT, etc.

In this article, we introduced you to Cardano, one of the biggest cryptocurrencies by market capitalization. To answer the question “What is Cardano?”, we explored the following topics:

To top things off, we wrapped up our Cardano analysis with an EOY price prediction, in both bullish and bearish scenarios. Keep in mind that none of the information should be taken as investment advice, and is only an expressed opinion of our writing staff.