Bitcoin 2022 Prognosis – What can we expect this year?

One of the most eventful years for the crypto industry is coming to a close. Bitcoin might not have reached a 6 figure price point in 2021, but its global macroeconomic impact is stronger than ever. Now, as we enter 2022, we observe some interesting trends and developments.

This article delves into the direction of Bitcoin as a currency and a store of value, while simultaneously looking at the shifts in context and sentiment. This year might be even more explosive than the prior, so strap in and get ready for a wild ride!

The decision of El Salvador to adopt a Bitcoin Standard might not have been supported by the World Bank, but it seems to work well for both the country’s growth and its citizens. The country is mining Bitcoin using volcanic power, has issued a Bitcoin bond, and has practically removed all intermediary costs for money transfers.
As global debt continues to grow, other nations will also look for ways to transform their personal sovereign debt to avoid hyperinflation. This is especially true for countries that heavily depend upon the dollar.

The rapid inflation observed in Turkey is a great example. With the value of the TRL fading away, policymakers of countries highly dependable on the USD will be urged to find solutions in order to avoid similar situations. 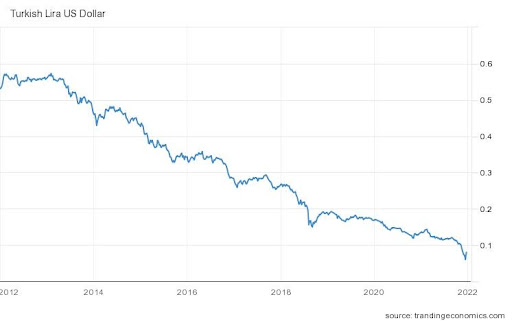 We expect that 2022 will be the year in which multiple countries will at least experiment with a Bitcoin standard for this exact reason. The detailed way this could play out, as well as the conditions that will make such a shift viable, are discussed in the video below.

When looking at Bitcoin’s performance historically, we see a tendency for bull run peaks around certain timeframes. December of 2021 was the date most expected for the final peak of this run, with many hoping to see a $200.000+ BTC. Unfortunately, the final push upwards has not yet occurred.

Many speculate that each consecutive halving leads to an extended and less impactful growth in the coin’s price. Others argue that increased money printing and economic uncertainty should lead to a supply squeeze, which seems rather realistic with the amount of coins currently listed on exchanges.

In both cases, the top of this cycle is not yet in. Many believe that the bull market will continue into 2022, with the peak occurring somewhere within the first quarter. The subsequent price drop should give us a better indication about the possibility of a Supercycle, a topic much discussed among Bitcoin investors. If the latest ends up being true, we might see a new high later in the year, as bearish conditions will be mild and short-lived.

As overconfidence and high leverage wipe out speculators and traders, coins are flowing into stronger hands. On-chain analysts Willy Woo and Will Clemente follow this trend closely offering useful updates.

Given the unexpected direction of the Bitcoin price, we regularly see massive liquidation events that lead to less BTC on exchanges, and the “filtering out” of opportunists and gamblers. In many ways, Bitcoin’s volatility rewards the holders in the long term, a trend that strengthens the scenario or a potential supply squeeze (described above).

Currently, Bitcoin on exchanges is reaching new lows, as less than 12% of the circulating supply is available for trading. When all the available coins are removed from circulation, we should experience massive and rapid growth in price, until HODLers re-enter their coins into circulation in order to sell. This could very well become the top of this market cycle. 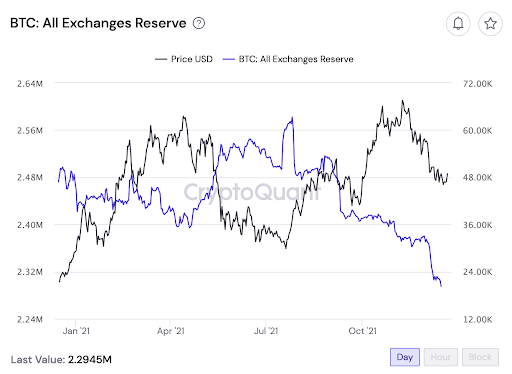 Redefinition of Bitcoin as a “risk asset”

With the pandemic-related lockdowns and QE packages weakening the global economy, we will also see more people becoming aware of the need to invest in assets that are immune to inflation.

The biggest investment opportunities to combat this issue are (physical) precious metals and Bitcoin. However, given the large premiums and inefficiencies of gold, many will finally start looking at Bitcoin more seriously. In turn, this will improve the image of Bitcoin as an investment opportunity and move skeptics into adopting it out of need. Eventually, we might reach a moment where it will be inherently riskier not to hold Bitcoin than to hold some.

I think we’re not far from the moment of clarity for boomers which is that its riskier to not own crypto than to own it, thereby changing the very definition of “risk asset”

With the recent announcement of Facebook’s rebranding, the world is finally looking at digital assets seriously. At the forefront of this revolution we see many institutions which are either investing their cash reserves directly into Bitcoin, or placing their money into stocks of companies that hold Bitcoin on their balance sheet.

Microstrategy is the company that resonates with most people, as they continue to buy Bitcoin regularly. Earlier this year, Michael Saylor hosted a virtual event with the goal of explaining the importance of holding Bitcoin on corporate balance sheets, and the benefits of doing so. While more than 1000 institutional representatives from well-known companies attended the presentation, we do not yet see a massive trend that points towards institutional adoption. As of this moment, only 27 public companies hold BTC.

In the year ahead we expect the number of institutions with Bitcoin reserves to increase massively, as we are now seeing how inflation has led to devaluation of the US dollar. Public companies with large capital holdings can no longer afford to lose buying power. Thankfully, Bitcoin is now a viable and proven solution to this problem.

2022 will be the year that institutional investors and analysts talk about #Bitcoin widely, openly, and seriously.

Cryptocurrency regulations have been on the forefront of the US policy changes. The 2022 budget proposal of the Biden administration proposed several changes in cryptocurrency reporting for individuals. At the same time, many countries that were formerly considered tax havens (e.g. Portugal) are also starting to incorporate capital gains tax for cryptocurrencies. While the regulatory landscape is yet unclear, we expect to see more restrictions the coming year, especially when it comes to the use of Bitcoin as currency (as seen in Russia).

Several countries have already classified Bitcoin as illegal in an attempt to maintain the power of their native currencies (e.g. India, Nigeria, and others). The ban has done little to decrease the trading volumes and adoption of cryptocurrencies in these nations, as P2P trading continues to increase.

We expect to see increased limitation and restriction of access to FIAT onramps (exchanges), especially from countries with high inflation. This could translate into a coordinated effort from banks of said countries to restrict payments to and from cryptocurrency-related platforms.

We have already seen government agencies trying to combat the popularity of decentralized financial products and their high incentives. Elizabeth Warren recently urged for increased regulation among such products, pointing out that smaller investors have the most to lose.

While DeFi is the latest trend in the crypto markets, Bitcoin has also been a topic of defamation for many years now. State-owned media like to brag about Bitcoin’s role in cybercrime, even if reports have repeatedly shown that the degree of such activities is minimal. If they occur, as Chainalysis recently reported, it is mainly in new DeFi protocols that choose to “rug pull” their investors. One might also note that the mainstream media has called Bitcoin “dead” several hundred times over the past few years, with 37 of those happening this year, under bullish market conditions.

Instilling fear into the unaware public seems to be a sort of last resort for them to protect the value and use of their currencies while CBDCs are being built to replace them. For this reason, it is not unlikely that we will see defamation of cryptocurrencies as a whole in the year ahead, primarily aimed at tightening regulations around the use of Bitcoin as a currency and store of value.

If 2021 had you sitting at the edge of your seat, then get ready for an even more explosive 2022. With lots of money-making opportunities on the horizon, the crypto industry will continue to increase in adoption. At the same time, Bitcoin will continue to progress towards becoming the one global currency, and you still have the opportunity to get in early.

To summarize our expectations for 2022, here is a shortlist of the main points we discussed: