Bitcoin Halving 2022 – What to Expect and Countdown Clock

The Bitcoin halving is only a few days away and excitement is starting to build up in the crypto community.

If you are new to this exciting world you might have many questions about this upcoming event.

These are a few of the questions that I will try to answer in this article.

Before we do so, however, let’s first see how much time is remaining before the big event.

Just a few days before the rewards are halved forever!

The reasons behind the Bitcoin Halving

Governments and banks are able to print more money each year and therefore decrease its value.

By doing this, they enter an inflationary economic model where they incentivize spending now rather than later. This system is steered towards high leverage practices such as debts, loans, and credit.

The inflationary model is detrimental, especially in the long term. The value of people’s savings reduces over time and, when retirement finally comes, their lifelong savings are worth only a fraction of their original value.

Let’s take the buying power of $100 USD as an example. Due to inflation, that amount of money in 1970 would have approximately the same purchasing power of $700 today. That is a big difference for just 50 years.

This is exactly why Satoshi Nakomoto introduced the Bitcoin halving principle. The creator of BTC wanted the value of its alternative currency to increase, instead of decrease, over time.

As such, he set some ground rules (coded within the Bitcoin blockchain) to render the cryptocurrency resistant to inflation.

So how does this model work?

Bitcoin Halving – What is it and how does it work?

Satoshi Nakamoto introduced the reward halving. This essentially stands for the slashing of miners’ rewards in half, approximately once every 4 years. Every time 210.000 blocks are mined, the reward decreases and a new “reward era” starts.

There have been 2 more halvings in the past, and we are now in the 3rd reward era, where one mined block grants 12.5 Bitcoins.

In a deflationary economic model, the issuance of new currency lessens over time, which means that it will be worth more later on. Taking into consideration the scarcity, mining difficulty and the controlled supply of Bitcoin, what you get is a foolproof model of a commodity that increases in value over time.

Satoshi Nakamoto explained the idea behind the halving:

“If the coinage does not increase as fast as demand, the opposite of inflation will occur, and early holders of the currency will see its value increase. In an economy, money has to be distributed and produced somehow, and a constant rate seems to be the best formula.” 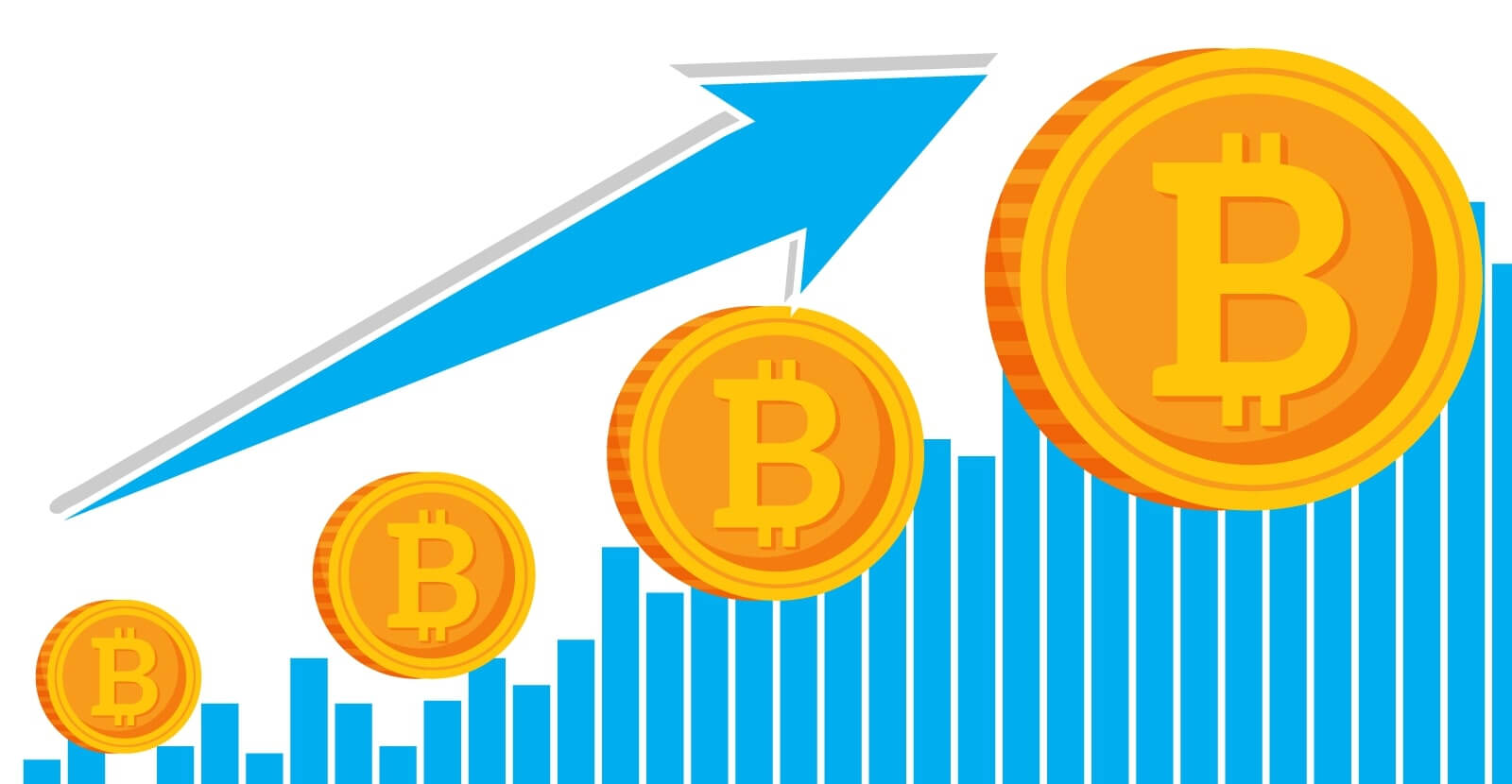 There have been criticisms of this model in the past. Wouldn’t this create another problem, namely collecting Bitcoin and never actually spending it? This question often comes up:

“Why would anyone want to spend Bitcoin, if they are certain that it will be worth more in the future?”

The answer is quite simple, really. Even though deflation discourages spending, you can never eliminate the need for it. Basic necessities are not something we can put aside. Commodities and luxuries become a timing preference instead of an artificial need. People get to choose if they want to spend now or later.

As such, one can use Bitcoin both as a store of value and as a currency. Only, instead of its value decreasing and stagnating over time, as is the case with government-based currencies, Bitcoin increases its worth over time, leading to increased mainstream adoption.

Previous Bitcoin halvings and their impact

The first Bitcoin halving occurred on the 27th November 2012.

Block 210000 was solved by a Radeon 5800 GPU, one of the most popular GPUs at that time used for mining. The graphics card was later sold at a significant markup to Chaang Noi, an early Bitcoin investor.

In the following year, market prices of the leading cryptocurrency skyrocketed. A new peak price was reached about one year after the halving took place. The price of Bitcoin increased from 12$ to a new high of 1.120$. The price corrected in 2014 and a long bearish market installed some doubt in the investor minds. Market sentiment was at a low point for certain, as Bitcoin’s price fell in the 300$ range, retracing by more than 70%.

And then, the second halving happened. It was this halving of July 2016 that opened the path for the crazy 2017 bull run of Bitcoin where we saw prices reach new highs once again. From 657$ at the moment of the second halving to a still unbeaten record of 19.780$ by December 2017. 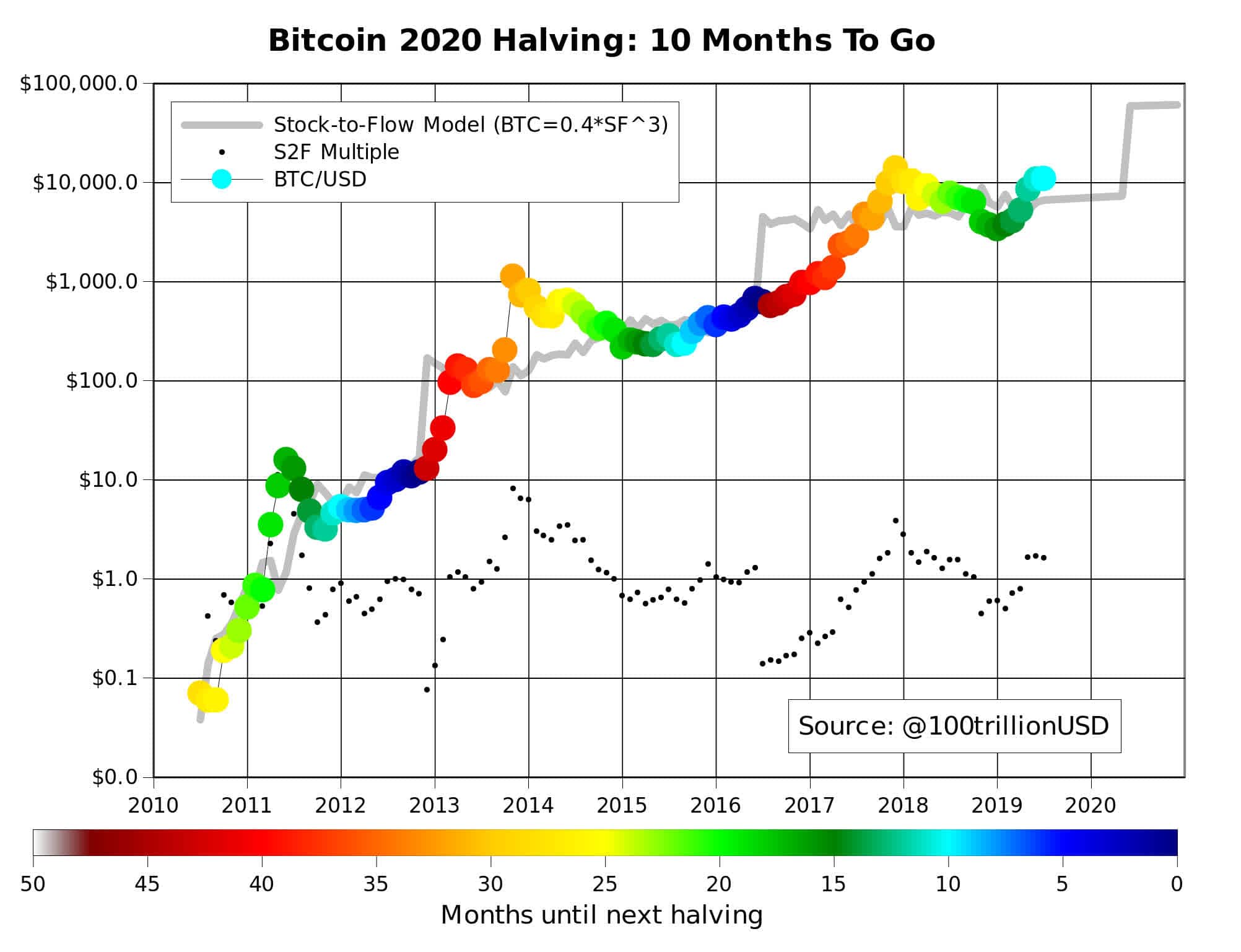 Based on the above, and by further analyzing the effects of the prior halvings on the coin’s price, we can see that the price increase was never immediate. Instead, what happens after each halving is somewhat of an “awareness” timeframe for investors and speculators to absorb the idea of increased scarcity.

In both occurrences, the halving has been a precursor of incredible bull runs and tremendous gains in value versus the US dollar.

In less than a year, the 3rd reward era is will be ending and the reward for mining new Bitcoins will be cut in half (6.25 coins per block).

For miners, this might seem counterproductive, as the reward barely covers their current electricity costs. Some even say mining is nothing but a “dead-end” and will soon be a thing of the past. 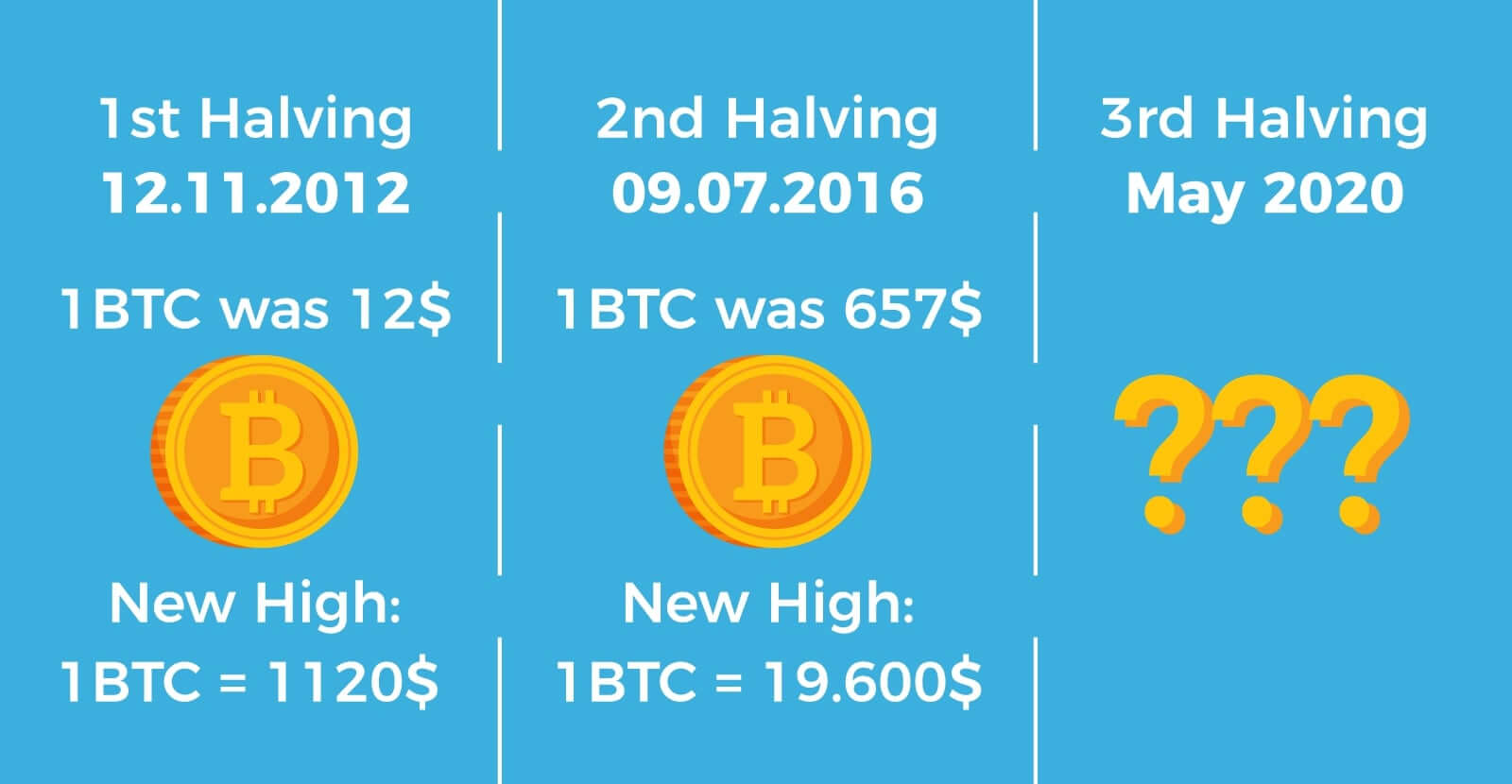 But consider this: In the first halving cycles, there wasn’t enough relevant data for miners to fall back on and have any kind of expectation about an increase in the price of Bitcoin. They had to rely on theoretical speculation on scarcity and a general belief in the cryptocurrency’s viability.

This is different now.

As a consequence of the reward halving, there is a high expectation for an increase in the coin’s price. It is now apparent that the halving cycles result in a new incentive to buy Bitcoin on the market, driving the prices up.

If the market behaves as it has in the past we can certainly be excited of what 2020 and 2021 will bring to the table.

The public awareness of the upcoming Bitcoin halving massively bigger than in the past. Interest for the special event has been steadily increasing in the past few months and is expected to surpass all previous monthly search volumes on Google.

The current graph presents a 2-year trend observation for the phrase “Bitcoin halving”. As you can see, during the latest all-time-high of Bitcoin, there was minimal interest in the reward halving. However, as time goes on, the trend seems to pick up.

During the month of June-July 2019, when Bitcoin saw a rapid price increase from its $6000 lows to almost $14000, the searches for the particular phrase saw an increase as well.

While it subsequently decreased a little bit, mainly because of the coin’s retraction to the $7000 levels, the trend is picking up again.

As of January, Google Trends gives this phrase a score of 100, which is the highest possible score in this tool. We can only wait and see how this will play out over time while cross-checking other tools as well.

Here is another interesting observation. If you were around in 2016, you might remember that the prior halving occurred in July month. Knowing this, we might be able to look at Google’s search volume for the “Bitcoin halving” phrase and make estimations.

The following tool captures the average monthly search volume for this phrase when looking at a 6-month timeframe. In this case, the average is 32600 searches per month.

But here’s where it gets interesting – you can also check the search number on a monthly basis. Now, what is interesting about this is the following:

It is therefore expected the searches for this particular phrase will be a lot higher, and thus the demand to obtain Bitcoin will be much higher as well.

At this point, all we can do is speculate, but it is safe to say that we might see a bullish price movement shortly before, and after the Bitcoin halving in 2021.

How to trade your Bitcoin based on the upcoming halving

Looking at historical patterns, there are two clear trading paths you can take when considering the bitcoin halving of 2021.

You can buy Bitcoin directly from an exchange, like Paybis, or speculate on the price of the cryptocurrency using derivatives. The latest is an advanced trading method reserved for very experienced traders. It’s quite similar to gambling, as you only use your money to speculate whether the coin’s price will increase or decrease.

That being said, if there was ever a low-risk investment opportunity, it has always been close to the halving. That is shortly before (1-4 months), and up to a year after the event occurs.

Bitcoin is a cryptocurrency that, by design, increases in value over time. By coding the halving mechanism into the network, inflation remains in check and scarcity increases over time.

Here is what you should remember:

Hopefully, the Bitcoin halving of 2021 will act as another milestone in the maturity of the cryptocurrency market. At this moment, there are clear signs of recovery.

And even though we cannot predict how the halving will affect Bitcoin’s price in the long run, we can positively predict that the trend will continue throughout 2021 and after the halving.